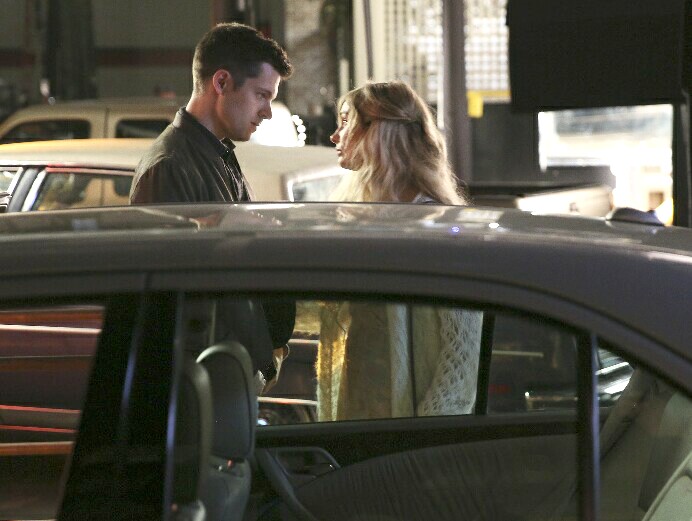 Last Wednesday night, while watching ABC’s “Nashville” in real time, an idea came to me for a crossover with another of the network’s series, “Grey’s Anatomy,” the seemingly unstoppable medical drama that I stopped watching a few seasons back because of its great fondness for killing off its characters. (More on that in a minute.)

There is a current front-burner storyline on “Nashville” that finds country singer and alcoholic Deacon Claybourne (Charles Esten) -- boyfriend of country superstar Rayna Jaymes (Connie Britton) and father of her oldest daughter Maddie (Lennon Stella) -- suffering from liver cancer and in dire need of a transplant. Time is running out, which has sent Rayna to the hospital chapel and Deacon’s loving niece Scarlett O’Connor (Clare Bowen) into the arms of his handsome young doctor, Caleb Rand (Nick Jandl, pictured at top with Bowen) – a character known on Twitter as Doc Hottie.

I’ll be surprised if Deacon buys the farm, so to speak, as the actor and the character are both hugely popular with fans of “Nashville,” a (great) show (in my opinion) on the bubble in terms of its ratings that simply cannot afford to alienate much of its audience. With that in mind I got to wondering, can “Nashville” find a way for Dr. Rand to remain on its canvas once Deacon is cured? His budding romance with Scarlett, also a country singer, is one of the most tweeted about relationships on the show. I really don’t think good Dr. Rand is about to reveal that he harbors a secret passion for country music stardom, so once Deacon’s story is done I don’t know how the producers can keep him around.

Here’s an interesting thought: While the character is hot, and since “Nashville” could use a media boost, why not connect Dr. Rand to a character at the hospital on “Grey’s” where all the characters work (at least until they are killed off or are otherwise removed from the narrative). He could pay a visit to Seattle – and bring his girlfriend Scarlett along with him – and perhaps decide to stay on at the hospital just as poor Scarlett’s career takes off, necessitating her return to Music City.

Anyway, I sent out the tweet pictured below, which generated more re-tweets I believe than anything else I have ever tweeted. (I didn’t realize Seattle Grace had been renamed Grey Sloan Memorial, because as I said above I removed “Grey’s” from my must-watch list a few seasons back.)

Little did I know that, less than 24 hours later, there would be an opening at Grey Sloan. ABC sure did a great job at keeping secret Dr. Derek Shepherd’s death. (Like that of McSteamy before him, McDreamy’s demise was disturbing and horrible.) This shocking event has done little to change my mind about “Grey’s,” whose producers seem to find it necessary to periodically kill off characters to keep their show fun and fresh. Personally, I think compelling stories of romance and personal drama can accomplish the same thing and that, over time, death gets old. (We all have enough of it in real life, don’t we?)

As I watched the episode last week I was struck at how not moved I was watching poor Dr. Meredith Grey (Ellen Pompeo) say a tearful goodbye to her husband and the great love of her life. I guess I have watched her say goodbye to too many loved ones over the years to really care anymore. (I call it the Sipowicz Syndrome, inspired by the character on the classic cop drama “NYPD Blue” who just kept losing everyone he loved or cared about.) Plus “Grey’s,” while still popular (especially among young adults) isn’t the pop-culture powerhouse it was earlier in its run (an impressive 11 seasons and counting). Had it happened back in seasons four or five, Derek’s death would have been one of those seismic moments that enter the television history books.

Patrick Dempsey’s sudden departure could be Nick Jandl’s ticket to stardom. Historically, viewers love when connections are made between popular series, something broadcast series do better than any other. Thanks to Twitter, Jandl’s character already has an obvious “Grey’s” nickname. Just saying.

The opinions and points of view expressed in this commentary are exclusively those of the author and do not necessarily represent the views of MediaVillage/MyersBizNet management or associated bloggers.