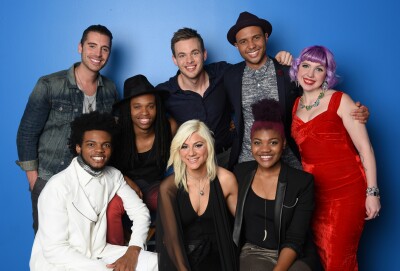 Fox’s “American Idol” Wednesday night tried something that NBC’s “The Voice” did in November 2013 with similarly exciting results. For the first time ever it integrated Twitter users into its competition on an in-show, real-time basis. That made the final moments of the two-hour telecast galvanizing in a way “Idol” hasn’t been in forever, as millions of people watching at home went wild tweeting and urging others to do the same, while the atmosphere in the studio became electric with anticipation.

It was a big win on both sides of the screen.

Here’s what went down: Once seven of the remaining nine “Idol” wannabes were told they were safe (in order: Nick Fradiani, Jax, Tyanna Jones, Joey Cook, Quentin Alexander, Quaasim Middleton and Clark Beckham) – the bottom two vote getters from the week before were identified as Daniel Seavey (pictured top, below) and Rayvon Owen (bottom, below). As is the norm this season for each week’s bottom two, they sang their hearts out in a last ditch effort to prove that they were worthy of continuing in this year’s competition. But in a dramatic departure from the usual routine, they weren’t trying to make a final grand impression on the judges – they were instead trying to impress all over again the viewers at home who through their votes had identified them as the two least deserving to move on.

It was a hugely exciting interactive experience, following the frantic communications on Twitter (on my tablet) while watching Daniel and Rayvon sweat it out (on my TV). A press release from Fox earlier in the day noted that viewers would have approximately five minutes to take over Twitter and push their favorite through, and that’s pretty much exactly how it happened. At 9:52 p.m., just after telling the home audience what to do on camera, “Idol” host Ryan Seacrest took to Twitter and incited a fan frenzy with the following message:

By 9:58 it was all over. Daniel – who appeared very nervous, but said in response to Seacrest’s expression of concern, “I’m calm. I’m 15 and I’m on ‘American Idol’” – would be going home. Twitter had spoken.

Smartly, Fox is going to continue to do this throughout the remainder of the season, which ought to pump up ratings for the show, at least during its final half-hour.

As far as I’m concerned, this was (and will hopefully continue to be) the best and most exciting incorporation to date of Twitter (or any form of social media) into a massive live entertainment program (including Twitter on “The Voice”). One might consider Ellen DeGeneres’ Twitter-busting selfie during last year’s Academy Awards to be more powerful and impactful, and in many ways it was, but it didn’t involve the home audience in much of anything other than making a photo instantly viral. On “Idol” viewers made the outcome their own.

This is exactly the kind of thing this show (and, for that matter, ABC’s “Dancing with the Stars”) should have been doing for a while now (instead of that very distancing Super Vote stuff). After all, “Idol” became an unexpected fast phenomenon back in 2002 in part because it was at the time the most exciting interactive experience in the history of American television, simply because viewers could pick up a phone (mainly landlines!) and influence the outcome of that week’s competition. The Twitter thing, however, was much more exciting, because it happened as we watched, not after the fact.

Fox ensured that viewers in other time zones could participate as well by following @AmericanIdol on Twitter and by watching a live stream of those final two performances online. The stream ended before the outcome was revealed, preserving some of the suspense for those viewers who would later be watching it all play out on television, or so Fox hoped.

Adding to the overall “Idol” excitement this week was the return of Season 1 champion Kelly Clarkson (pictured above) to the show as mentor and performer. (Season 2 winner Ruben Studdard also appeared on stage, but did not perform, and Season 12 winner Candice Glover was seated in the audience.) I’ll never forget being in the Kodak Theater the night of the Season 1 finale and watching Clarkson become our first Idol. (I’d like to forget the fact that it was 13 years ago.) Viewers by the millions fell in love with her at the time, as they would Carrie Underwood three years later. (I was at the Kodak for that finale, too.) It was thrilling to be a (very small) part of it all. For me, that made it even more exciting to have Clarkson back on the show in such a major way. Who could have guessed back then that almost a decade and a half later she would return to the show and that contestants would be performing songs from her massive catalogue of hits?

After several down years, something about “American Idol” is really working this season. The Twitter tweak is only part of it. I think it has a lot to do with this year’s finalists; they may not all be terrific singers but each of them has a strong presence on television. I think Clark Beckham (pictured above) is the one to beat.