UMC's "Stuck with You" Has Hella Potential But Needs More Luv 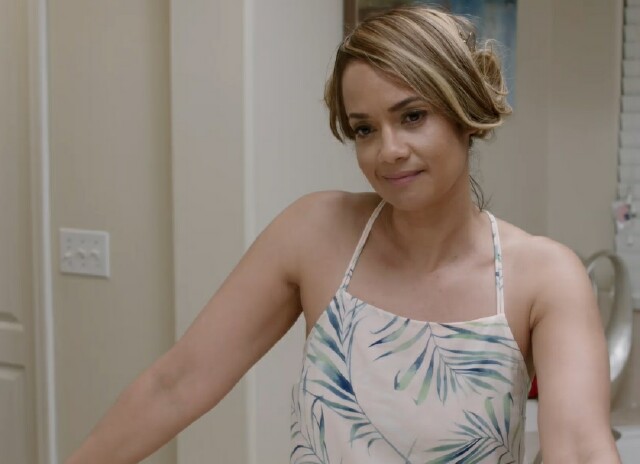 The new drama Stuck with You, on UMC, is all about the high-stakes world of celebrity #relationshipgoals and the real-life messiness that ensues when that carefully curated facade starts to crack.  Written and directed by Patricia Cuffie-Jones, this series isn’t perfect by any stretch of the imagination, but all the pieces are definitely there for it to mature into something dope.  So, let’s talk about where Stuck with You is right now, and what it should do to get where I think it needs it to go.

Tammy Townsend plays Candace, one half of #CandyLuv -- a celebrity power couple comprised of herself and her husband Luvell (played by Timon Kyle Durret). Candace is an R&B singer who peaked in the Nineties, and Luvell is a movie star who’s still pretty poppin’, supposedly.  From what I’ve gathered, Luvell cheated at some point prior to the series beginning, and then, because of the fame and financial success that the public image of their marriage brought them, they decided it would be less of a marriage and more of a business relationship.

(Side note:  Why didn’t they just call it #CandyLuv?)

First off, Townsend is not one of the problems I have with this show.  I’ve loved her work since her Family Matters days and K.C. Undercover.  Townsend plays Candace pretty well. Besides the fact that her proclivity for comedy tends at times to shine through, she’s also impossible to misread (facially, at least).  She can say whatever she wants, but one look at Candace’s face and you already know what she’s thinking, regardless of the scene.  She also never sounds like she’s just saying lines.  (We’ll come back to that.)

Honestly, the acting on the show isn’t any better or worse than most other shows in this genre, but there are other factors that contributed to the “something’s off” feeling I had here and there.  Maybe I’m a product of my profession, but there are some things I just couldn’t help but notice.

For example, I’m not sure if it was the actual cameras or lenses being used, or if the color grading was off (my money’s on the latter), but something about the visual feel of the series didn’t sit right with me during the first couple of episodes.  This was especially true during exterior shots where the background was washed out by the sun.  By the time the third episode came around it seemed to have been worked out, but that also kind of goes for the other minor gripes I had.  Well, for some of them, anyway.

Another issue was some of the framing and blocking.  It’s like no one wants to get in any tighter than a medium close-up.  Give me a real close-up!  I want to see right into the actor’s eyes.  These people are real, not CG, and yet I’ve seen tighter shots of Thanos.

Location-wise, everything is mostly good during the exterior shots (as I mentioned earlier, the color grading and exposure issues seem to have been worked out by the third episode).  The issue is the interiors and how they’re presented to the viewer, and I truly think that is the crux of what is “wrong” here.  Have you ever seen a play? Of course, you have.  You know how you know it’s a play that you’re watching?  Because every set only has one side, and you can see the whole damn thing at once.

Cut to:  Luvell in his office.  I don’t know what his entire office really looks like, or where his clients sit, or how nice the building it’s in is supposed to be, because I can’t see any of that.  Sure, I can see out the window behind him.  I can see his assistant Quasir (Terrence Green) sitting next to his unexplained standing desk, but he’s never actually facing the desk.  He’s facing the camera, which, again, is mostly relegated to one side of the room.  It reminds me of the way actors “cheat” towards the audience during a theatrical production.

In real life people face each other, turn around and walk around corners.  The camera should follow these motions.  It should whip pan, the way one’s head does, especially in such supposedly dramatic situations.  But it doesn’t, for the most part.

The lack of visibility is honestly the main thing that pulled me out.  Luvell is supposed to be a movie star, but I can’t see enough of his house or his bathroom or anything to truly buy the idea that this man has bread.  Same goes for Candace.  Show some faux footage from an old music video, a poster of her from the Nineties, or a faux broadcast from a media outlet (like one called GMZ instead of TMZ, or something).  Make me believe this sh*t.

Lastly, I would mostly just raise the stakes all around.  This series should fall somewhere between how Empire feels and how black-ish looks. (black-ish’s visual game is on point.)

To be clear, none of my gripes about what is otherwise a solid source of black entertainment mean that this series isn’t worth a watch.  It definitely is.  It just has a lot of elements that feel how I imagine a play-turned-screenplay might feel, and in that scenario, spoken lines can occasionally feel like lines that are just being spoken instead of natural dialogue.  One-dimensional backgrounds shown mostly in wide shots, no real extras, and barely any establishing shots … if addressed these minor details could take this show to the next level.

Stuck with You has hella potential, and because of that I will stick with it, as well.  Townsend is a godsend, and when everything else falls into place, I know this show will become the series that it’s truly capable of being.