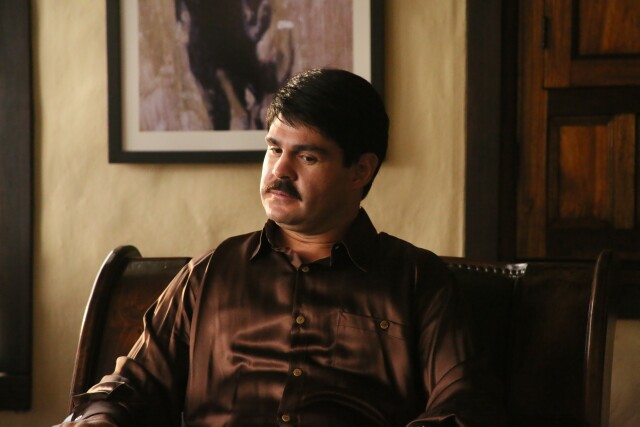 Fun fact:  Being the leader of a big time drug cartel takes a little bit more than a pair of steel cojones.  It also takes intelligence, a loyal squad and a penchant for near military level strategic planning.  (Also, a ton of disposable cash doesn’t hurt.)  The drug game is like a super intense chess match -- except if you lose, you die.  Fortunately for him, infamous drug lord El Chapo has all the aforementioned in spades.  On January 19, 2001, Joaquin “El Chapo” Guzman escaped from a federal prison in Mexico, a feat that allegedly involved upwards of 70 people and cost Guzman a cool $2.5 million.  Season 2 of the Univision and Story House Entertainment collaboration El Chapo opens with a depiction of the riveting events leading up to said escape, and let me tell you, it does not disappoint.

When we left Señor Guzman at the end of Season 1 he was in the middle of a serious beef with some rival cartel patrons (bosses) and in relentless pursuit of the men who ordered the brutal murders of the wife and children of his close friend Guero (Juan Carlos Olivas).

Unfortunately, as Season 2 opens he ends up taking a loss in the form of being arrested for the murder of Cardinal Juan Jesús Posadas Ocampo (which, ironically, is one of the few crimes he didn’t actually commit).  He goes to prison, and before long he’s pulling a Goodfellas by using his influence to drastically improve his living conditions and plan his inevitable escape.

Marco de la O (pictured at top) is effortlessly convincing in his multi-dimensional portrayal of the titular cartel leader, to the point where more often than not I found myself actually rooting for him.  True to form, however, the series does occasionally remind viewers how truly horrible the man is capable of being, but I’ve found that those moments pale in comparison to his sinister prowess and resilience.  The world he lives in is rife with individuals whose ambitions are only outmatched by the narcissistic personal interests that fuel them. Everyone is either a blatant or potential enemy, and in that context Chapo’s actions and reactions are understandable.  Arguably, most of the miserable shit that de la O’s character gets into can be traced back to the sociopathic actions of rival patron Ramon Avendaño (Rolf Peterson) in Season 1’s first episode, and it makes me wonder how much easier life would’ve been for all involved if Chapo was just given the one thing he always wanted: Respect.

Telling the story of a world famous criminal is far from a groundbreaking concept in the world of television, but this series does it with an enthralling finesse that sets it apart from the pack.  The characters in this ripped-from-the-headlines narrative are superbly written and well rounded, and that combined with the idea that most of this stuff happened in real life to some extent adds an extra level of intrigue.  That’s to say nothing of the well-utilized cinematography and underlying soundtrack.

I’m aware that some viewers may take issue with having to read the English subtitles for this Spanish language-only show, but honestly, each episode is so good at pulling the audience in that after a while they’re barely even noticeable.  Also, I feel like English language dubbing or actual English dialogue would ruin the authentic feeling that the series creates.  We see shows like this all the time, but the idea that this stuff really happened helps to create El Chapo’s unique appeal.  These events happened primarily in Mexico, as well as a couple other Spanish-speaking countries, and hearing the characters in anything other than their native tongues would break the illusion.

It may be a poor choice of words, but this series is addictive -- period.  I can’t help but root for Chapo (no matter how morally torn it makes me) and I definitely can’t watch just one episode per sitting. Thankfully, Univision’s partnership with Netflix ensures that I’ll never have to.

As I mentioned in my previous column about this series, El Chapo’s heavy Latino presence behind the scenes is a personal point of pride.  Yes, the entertainment industry seems to have made increased diversity in the workplace a priority (as evidenced by the various diversity initiatives and programs implemented by a few major companies), but until quite recently everything’s been pretty whitewashed (hence the initiatives).  As a person of Latin decent, it feels good to know that people I more easily relate to on a cultural level are responsible for something I enjoy so much.  I’m a firm believer that when a story is being told about people of a specific persuasion, it makes sense for the storytellers to share said persuasion.

El Chapo is the perfect example of that sentiment in action.  Latinos represent!