Univision Has Yet Another Impressive Biblical Epic in "Rey David" 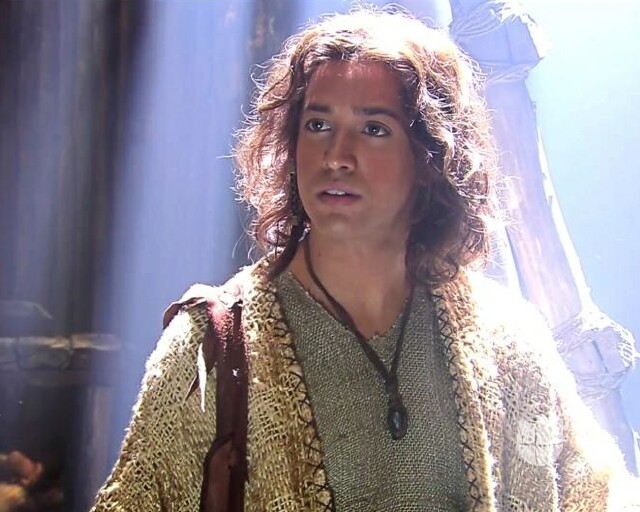 The series is written by Vivian De Oliveira (José de Egipto, Los Diez Mandamientos) and produced under the mantle of RecordTV, which is owned by Brazilian evangelical leader and media mogul Edir Macedo Bezerra.  As with their previous series, RecordTV aims for quality, authenticity and scale with their bible epics, from massive sets and lavish costumes to shooting on location in deserts and sweeping landscapes.

The premiere episode opens with narration over extensive battle scenes and illustrious scenery, filling in the audience on the recent history of Egypt leading up to David’s young adulthood.  When the twelve tribes of Israel are slowly being taken over by their enemy, King Saul strategizes with his military leaders and is accused of no longer “listening to God,” who put him on this path to power.  Meanwhile, young shepherd David fights off a bear that threatens his family’s sheep and his brothers soon return from battle.  David is much like Joseph, the titular character of José de Egipto, in the sense that both are often envied by others, particularly their older siblings.  David tends to his brothers as they have dinner but his father scolds him for bothering them.  His mother Edna reassures him that kindness, courage and bravery will soon lead him to greatness.

One of King Saul’s generals is ambushed by bandits and his daughter is taken amidst the scuffle.  David sees what’s happening and intervenes, rescuing the young woman.  There is evident “love at first sight” between the two.  The great prophet Samuel, who was given the order by God to anoint Saul as king many years ago, pays Saul a visit, saying that God has a new mission for him.

During a massive battle, Saul’s son Jonathan corners their greatest enemy Agag and is ready to strike but Saul intervenes.  Jonathan implores his father to let him continue, saying that Samuel’s orders from God were very clear, to which Saul responds, “I am the King!”  Samuel senses his disobedience and is heartbroken that Saul has once again disobeyed God’s orders.

Samuel then visits King Saul to remove him from the throne for his actions, and claims that God has already chosen a new king, one that has the heart and courage to obey Him.  Then Samuel goes to Jesse’s home, saying that one of his sons has been chosen as the new king, and after meeting all of the older siblings, he knows that David is the one God has chosen.

Leandro Leo (pictured at top), who plays the young David, deserves recognition for his role as the shepherd-turned-king.  He brings a warm, boyish charm to the role while adding a sense of bravery and heart.  Gracindo Junior, who portrays King Saul, depicts the fallen king with a stoic yet commanding presence, particularly in the battle scenes.  Isaac Bardavid brings as much emotion as he does authority and assertiveness to his role as Samuel the prophet (whose two books in the Bible are what the series is based on).

The production values continue to astound, with massive sets depicting town squares and marketplaces, as well as the lavish tents and temples where King Saul and Samuel reside.  Filming on location in various mountain and desert settings adds a sense of authenticity and realness that period series on other networks don’t always have; often opting for green screen or fabricated locations.  The battle scenes in particular feel like they were ripped from the pages of history, from the costumes and props to the intense fight sequences with well over a hundred extras clashing swords.

There are many other biblical miniseries and dramas that RecordTV has produced in recent years that Univision has its eyes set on bringing to their massive Hispanic audiences.  Rey David joins my personal favorites along with José de Egipto and Los Diez Mandamientos.

Rey David is telecast Monday through Friday at 8 p.m. on Univision.