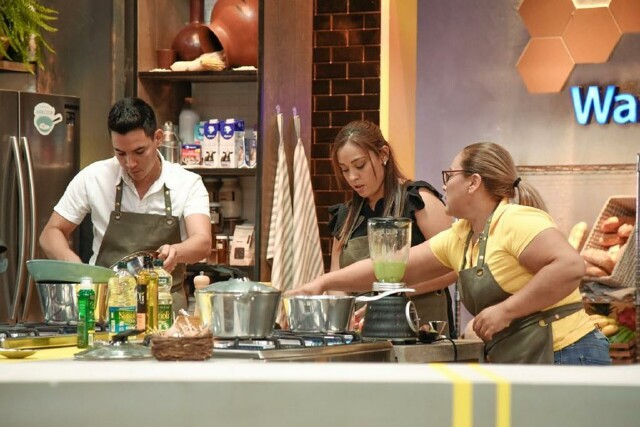 While food and cuisine, no matter how simple or extravagant it may be, is a part of practically every culture around the world, it is an undeniable staple in Latinx and Hispanic culture.  It’s part of our history, who we are now and who we will always be.  Every Hispanic knows not to show up to any party empty-handed; whether you’re bringing a bowl of ponche, some extra rice or a dessert made with abuela’s secret recipe, you’re representing your culture and maintaining your family’s reputation.  Do not shame them!  Univision’s latest competition series combines food and family, with a dash of frenzy, in a big pot and sets the standards high with Familias Frente al Fuego, Desafio en la Cocina (Family Food Fight:  Kitchen Challenge).  (See below for a special video preview.)

Hosted by actress and TV personality Inés Goméz Mont, the six-part competition series pits eight families from across Mexico against each other in explosive culinary challenges.  As always, there are eliminations until the last family standing claims the grand prize of $75,000.  As the heat rises in the kitchen, families end up fighting amongst themselves when, of course, someone thinks their way to prepare a dish is not only the best way, but the only way.  Tensions run high, the drama ensues and the tears start rolling.

Each week, the eight multi-generational families face off four vs four in the first round, with two from each group being eliminated after judging.  The final four go head-to-head in the semi-finals until only two move on to the finals, where a champion is chosen.  The winning family members take their prize money home (along with bragging rights that their house is the best place to eat).

What I particularly admire about FFFis the emphasis on the families’ personalities and traditions.  The very first challenge tasked the families with preparing a three-course meal in ninety minutes that not only reflected the cuisine of their region and culture, but the traditions of their own homes.  Whether they’re using unorthodox cooking methods, secret ingredients or recipes passed down through generations, each family brings something different to the table, so to speak.

Like many reality competition series, FFF has plenty of heartfelt stories from each family.  One of the most beautiful comes during the interview with the Ek sisters, as Linda, Genny and Socorro (their sister in law for almost 40 years) share how they embrace their native Mayan ancestry and reflect it through their love of cooking, dance and music.  Linda also shares how their father did not allow them to attend school when they were younger and how much her sisters empower her to shine, coincidentally, like an “Estrella” or star, which Ek translates to in Mayan.  A true tear-jerking moment.

A rather hilarious part of the series is the commentary from the very outspoken judges who are watching via monitors from an observation room separate from the kitchen.  There are several times when the judges bolt out of their room and visit the families’ cooking stations to give some (sometimes much needed) guidance or inquire about their dishes and cooking methods.

I feel somewhat spoiled when it comes to food because my entire family is made up of professional chefs and phenomenal home cooks.  Our holiday parties and summer barbecues are endless feasts with food from all over Latin America.  Salvadorian pupusas, Colombian arepas, Puerto Rican rice, Mexican tamales, you name it, we’ve got it.  While I don’t consider myself a professional cook, cooking has been a part of my life since I was a little kid.  Even if it was just peeling potatoes, or taste testing sauces, I felt like a pro.  Even at 26, my parents still don’t let me take the lead in the kitchen; they just can’t help but stir the pot, or taste test everything.  (How the tables have turned!)

Familias Frente al Fuego is produced by Televisa and Endemol Shine Boomdog, the Spanish-language division of production company Endemol Shine North America,  and is based on the popular Australian series Family Food Fight.