Unpacking the Irony of the New Netflix Comedy "Blockbuster" 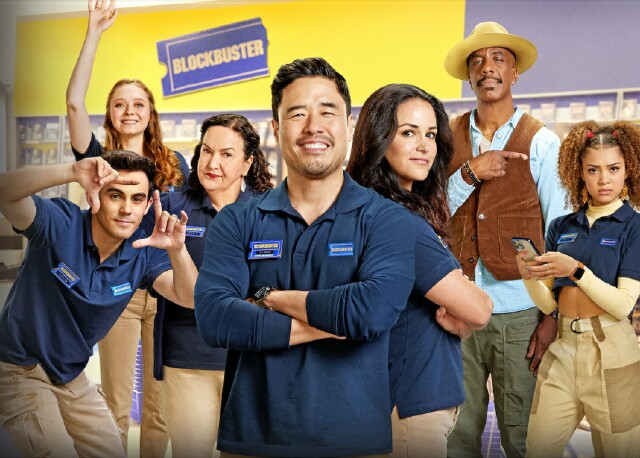 We all know that "Video Killed the Radio Star," as per the Buggles (Google it), but the real question today is, "Who killed the video star?" I know the answer. Netflix. It was Netflix. And that fact makes the release of one of its most recent comedies all the more ironic.

Created by Superstore and Brooklyn 99 writer Vanessa Ramos, and executive produced by Happy Endings creator David Caspe, among many others, comes Blockbuster, the fictional telling of what happened when the real-life pre-streaming video giant's Bend, Oregon, location became the last standing Blockbuster Video in the entire world. Starring Fresh Off The Boat's Randall Park as store manager Timmy, Brooklyn 99's Melissa Fumero as his number two Eliza, In The Heights' Olga Merediz as Connie, American Vandal's Tyler Alvarez as Carlos, Madeleine Arthur as Hannah and Kamaia Fairburn as Kayla, Blockbuster follows this polo-clad crew as they try to prevent the corporate beast turned locally-owned small business from becoming a thing of the past.

Speaking of the past, I remember being a kid and taking those coveted trips to the local Blockbuster with my mom. My brothers and I would split up to hit different aisles, beg for candy we knew we couldn’t have, and vote on what couple of flicks the family was taking home that night. Physically being there in the store was an integral part of all the fun. It was a pure and simple experience, and I relish those memories.

Blockbuster the TV show, not unlike the eponymously named video store’s business model, is also pretty simple. Modern technology has all but eliminated the need for brick and mortar video rental stores now, not unlike the effect that Amazon has had on many locally-owned businesses. I mean, who needs to leave their home when the things they want can come to them? This, of course, makes it impossible for people to do what they’ve always done when shopping face-to-face: connect. There aren’t exactly any aisles to run down on Netflix, you know? Timmy is desperate to keep his Blockbuster’s doors open for that exact reason. Well, that, and the fact that his store is a financial and emotional necessity for his employees. For most of them, the money made working there is absolutely needed. For the rest, just being there is the best part of their day (whether they’ll admit it or not), because they get to spend each of those days with the family they chose – their work family.

Besides all that A plot stuff, it turns out that Timmy, Eliza and Percy (the owner of the mini-mall where this Blockbuster is located, played by J.B. Smoove), all went to high school together, and Timmy's had a crush on Eliza ever since. Now that Eliza has returned to the store because of the financial strain of her divorce from her cheating husband Aaron (Leonard Robinson), there may be some hope for her and Timmy. Yes, Eliza is attempting to work things out with Aaron, who does seem like he's trying, but remember, in The Office, Pam wasn't exactly single when she and Jim met, and we all know how that played out.

The only thing is, when it comes to this show, I can't really put my finger on what it might be that feels just a little off, because something surely does, even though on paper all the pieces are there. However, I might not have to have to put my finger on it, because they may have put their own finger on it, so to speak, through Eliza.

In the first episode, during the crescendo of a rallying moment between Tim and his employees, Eliza chimes in with, "Isn't it ironic that the small business taking a stand against the big corporation in this scenario is actually a franchise of a once huge corporation named after the exact type of big corporate movies that killed off smaller movies?"

Now, while that is an astute observation, the takeaway for me were the words, "the small business taking a stand against the big corporation." I find that phrasing to be, if nothing else, inaccurate, because in reality there is no big bad corporation for them to fight. The show literally begins with Tim getting his final call from corporate because all the offices had been liquidated. That's how they became the last store, because there's literally nothing else left of the business. Therefore, Tim and the gang aren't fighting anyone or anything specific, other than the same possibility of going out of business faced by every small business owner.

This is where I believe this feeling of “off”-ness I described is originating from. The show lacks a clear enemy. In Superstore it was Cloud Nine corporate. In Brooklyn 99, it was usually actual bad guys. In Community, it was City College, and in Happy Endings… well, that show didn’t really have a clear bad guy either, but it’s also the only one I just mentioned that only made it to three seasons, so make of that what you will. The point is that enemies may not have constantly loomed over every episode, but every once in a while the team would have to pull together to deal with these specific external threats. That’s something I’m just not getting in this show. Probably because, just to sort of build off of what Eliza was trying to say, the company making this show is the same one that put the company the show’s about out of business in the first place. Admittedly, it’s a tricky position to be in.

Look, the talent is proven, the money is there production-wise, and the people behind the scenes have pumped out a number of very successful comedies… but, whether or not Blockbuster will be one of them still remains to be seen. I feel like the tide would truly change in this show’s favor if the showrunner(s) made a serious effort to capture the nostalgia of actually being in a Blockbuster, sort of like how the movie Waiting… perfectly encapsulated the experience of being a restaurant server in the mid-2000s. That, and solving the clear enemy problem would go a long way. Hopefully something happens, because this is one rental I really hope we get to hold onto for a while.

Blockbuster can be binged on Netflix.