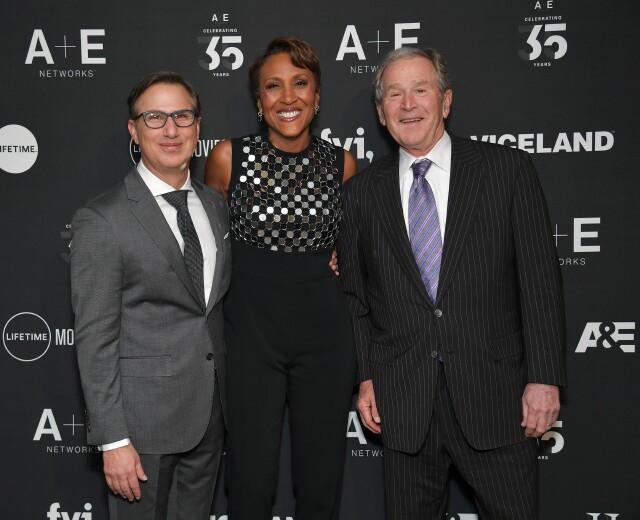 In recent years, A+E Networks has offered some of the more unique, memorable early-season Upfront events.  For example, the 2017 showcase featuring a parade of deeply personal testimonials from company executives.  This year, in recognition of a double milestone -- 35 years in business as a cable network programmer and a quarter-century running History -- A+E’s latest turn maintained the unique streak.

Venue: Jazz at Lincoln Center’s Rose Hall near Columbus Circle.  Before attendees caught the presentation inside The Appel Room (famed for its glass wall with the beautiful sweeping view of Central Park and the east side of Manhattan skyline), they were treated to a bright exhibit hall inspired by specific series or theme weeks.  Features included KITT, the ultra-powered car from Knight Rider, joined byRider and Baywatch star David Hasselhoff (on behalf of History’s Car Week); a giant snow globe (representing Lifetime’s holiday movies) and an unidentified flying object with a summer beach scene below (for renewed History drama Project Blue Book).  Nice touch:  a video wall above the main bar presenting live views of celebrity red-carpet activity outside The Appel Room, plus social media feedback and factoids.

Presentation:  A three-part display, focused on History, Lifetime and A&E (in that order).  Each portion had one or more iconic personalities – not announced beforehand -- do the majority of presenting.  In one of the best-kept secrets of this season so far, former president George W. Bush gave attendees a keynote integrating his admiration of History with insights on the value of learning from history itself.  “When you study history, you really understand your job,” Bush declared.  “History brings a sense of humility to someone who is president.  The institution of the president is more important than the occupant of the office.”  Three-time Summer Olympics gold medalist Aly Raisman explained her involvement inFrom Darkness to Light, a new Lifetime series exploring sexual assault instances among women.  “I want to use my voice to help others speak their truth,” she said.  Country music superstar Garth Brooks (back on tour around the country this month) completed the A&E section talking about his four-part Biography miniseries.  “If you’re going to do a docuseries, do it right,” he said.  “They [A&E] will.”

News:  Sylvester Stallone will executive produce and co-direct The Tenderloin, a History scripted miniseries set in a turn-of-the-century New York neighborhood.  The channel also greenlighted The Unexplained, with William Shatner investigating historical mysteries, and a trio of hybrid-scripted miniseries (Washington/The Food That Built America/Grant).  Lifetime will offer 150 original movies during the 2019-20 season, largely produced, directed and/or written by women, plus produce a two-night scripted miniseries on popular rap duo Salt-N-Pepa, and reboot the unscripted favorite Supernanny.  A+E’s new series ahead include Top Dog, a canine cop competition from Live PD’s producers, and Million Dollar Pallet, produced by the makers of Storage Wars.

Host:  Peter Olsen, A+E’s Executive Vice President of Ad Sales, charmed the crowd with some snappy asides in between the celebrity remarks.  Choice quip:  “You couldn’t get a better endorsement (of History than President Bush) and now he’s going back to watch it.  We have one high-income viewer at least.”  A+E Networks Group President Paul Buccieri kicked the showcase off with some opening remarks.

Data Insight:  Lifetime’s Surviving R.Kelly is the top-rated unscripted documentary this season; Live PD is No. 1 on Friday and Saturday nights among all cable networks (and on some weeks, all of TV, broadcast networks included).  Seventy-six percent of History viewers trust the ads running on that network, Olsen added.

Innovative Opportunity:  History alone will launch a trio of outreach initiatives next season with sponsor participation -- HistoryTalks events, a HistorySpeaks collection of videos and podcasts, and a three-day exhibition HistoryCon next year in Pasadena, California.  Lifetime will team up with the Association of National Advertisers’ #SeeHer campaign, conceived to expand the role of women in media on-and-off camera.  An assortment of content, including #SeeHer Moment vignettes, will be produced with ad tie-ins.