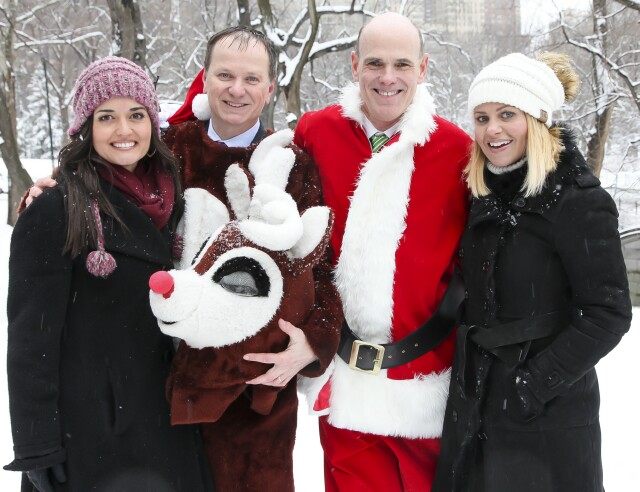 With dire predictions of more than 10 inches of snow across the New York City area and transportation options curtailed in some cases until Thursday morning, Crown Media Family Networks made the wise decision late Tuesday to cancel its Upfront gala Wednesday night at The Rainbow Room.  (This was the second Upfront event this season to be cancelled due to severe weather; Ovation was hit first.)

And then they did something incredibly timely and forward-thinking.  Undeterred by the heavy snowfall on Wednesday, President and Chief Executive Officer Bill Abbott, Advertising Sales Executive Vice President Ed Georger and two of Hallmark Channel’s most popular made-for movie personalities, Candace Cameron Bure and Danica McKellar, made their way to Central Park for an impromptu Facebook Live transmission during which many Upfront announcements were made.  (McKellar, Georger, Abbott and Bure are pictured at top, left to right.)  More than 100,000 people watched Crown’s Facebook effort live or on replay as of Thursday night, and at least 23,000 more have viewed that short-form production since.

For Georger, reaching out on the fly via Facebook did ease the disappointment of not holding court at one of the most elegant spaces in New York for the first time in three years. “We were excited about getting everyone together,” he noted during a special debrief for MediaVillage last Friday morning.  “The room is gorgeous and stands for itself.  It’s a beautiful setting and the perfect place for a celebration.”

Here’s what Crown Media planned to offer at its event, broken down by our usual categories.

Presentation: The overall focus was on the ability of Hallmark Channel and sister service Hallmark Movies & Mysteries to grow both viewership and advertiser support in a climate where other cable networks are enduring downturns in both categories.  Relevant content (mostly arranged around holiday periods and seasonal experiences like weddings in June) presented in a family-friendly atmosphere matters most.  “We’re a safe place for advertisers,” Georger explained.  “We're creating an environment where the advertising works harder and is more effective because the ads are in content synchronized with the marketer’s message.”  Testimonials from on-camera talent at both channels would have showcased the production quality of Crown’s content.

News:  Three new “mystery wheel” elements will launch on Hallmark Movies & Mysteries next year: Crossword Mysteries (crossword puzzle editor works with police investigations, co-starring Lacey Chabert and Brennan Elliott), Picture Perfect (adventures of a photographer sleuth, played by Alexa Vega) and The Chronicle Mysteries (Alison Sweeney as a novelist/podcaster working the crime beat).  All three will get a set of made-for movies.  At Hallmark Channel, scripted favorite When Calls the Heart and new unscripted series Meet the Peetes will continue (into a sixth and second season, respectively), while new animal competition special Cat Bowl will launch next February 2 as part of an expanded multi-element pet adoption campaign.  Separately, look for more original Hallmark programming featuring musical talent, based on successes during the last two years with films starring Mariah Carey and Jewel.  “You generate a positive environment for viewers to connect to the programming,” added Georger. “We’re looking for heartfelt singer-songwriters who tell great stories that we can translate into great movies.”  So far in this new initiative, Five for Fighting leader John Ondrasik (who performed at Crown’s Upfront two years ago) will co-develop a movie based on his hit single “Christmas Every Day” and country music star Kellie Pickler (co-host of the new daytime talk/lifestyle hour Pickler & Ben, which was honored with several Daytime Emmy Award nominations last week) will be involved in another project, full details forthcoming.

Side Note No. 1:  For the second year in a row, Hallmark Channel did not greenlight an original weekly scripted series.  Don’t conclude that parent Crown Media is through with the format, Georger maintained.  A development team was recently formed in Los Angeles to consider various concepts.  “We want to do original scripted in a strategic way, versus putting on a lot of product and hoping something sticks (beyond one or two seasons),” he said.  “We’ve done well taking successful movies and book series and spinning them into long-running original series [When Calls the Heart, The Good Witch, Cedar Cove and Chesapeake Shores, to name four].  That format works.”

Side Note No. 2:  Hallmark Drama (introduced last October) is now available in nearly 10 million TV households.  Until the network’s circulation builds up, programming will run with limited commercial interruption.  Georger anticipates the network will participate in next year’s Upfront in lockstep with Hallmark Channel and Hallmark Movies & Mysteries.

Hosts:  Abbott and Georger would have shared the podium with a group of celebrity testimonial presenters, including Bure, McKellar and Witch co-star Jack Wagner.

Star Time:  Pickler had a set of songs she would have performed in front of the Rainbow Room crowd.

Cuisine: The menu highlights included burrata salad, seared diver scallops with truffled Montauk lobster potatoes or filet mignon as the entrée choices, and a dessert assortment including mini-baked Alaskans and caramel popcorn ice cream lollipops.  My own mouth-watering scale suggests a score of 4 or 4.5 Jacks was in the making. (Note: Cuisine ratings never figure into our overall Jacks scores.)

Data Insight:  Hallmark Channel was the No. 1-rated cable network among women 25-54 and No. 2-rated among women 18-49 in total-day ratings during fourth quarter 2017.  Also, a Nielsen study concluded the network increased advertising effectiveness in several categories (advertiser, brand and message memorability, and brand likeability) by double-digits last year, and up to 50 percent in at least one category.

Innovative Opportunity:  Long-running (and now Daytime Emmy-nominated) weekday series Home & Family will conduct a “Dream Holiday Home Decorating Contest” this Christmas season, with the winning viewer having his or her home made over to a holiday theme.  For 2019, the program’s own studio space (a house complete with backyard) will be upgraded through a “Renovation Fever” campaign with viewer and affiliate participation options.

There will be no overall Jacks score awarded to Crown Media Family Networks this year because there was no actual event to consider.  But they deserve an informal 5 Jacks for making the most of a bad situation over which they had no control and using it as an opportunity to do something inspired, pulling together what some are referring to as a Virtual Upfront and others the first-ever SnowFront.  Well done!

Note:  MediaVillage’s E.B. Moss managed to bring Candace Cameron Bure and Danica McKellar in from the snow to record an upcoming episode of her Insider Insights podcast.  Look for it soon.