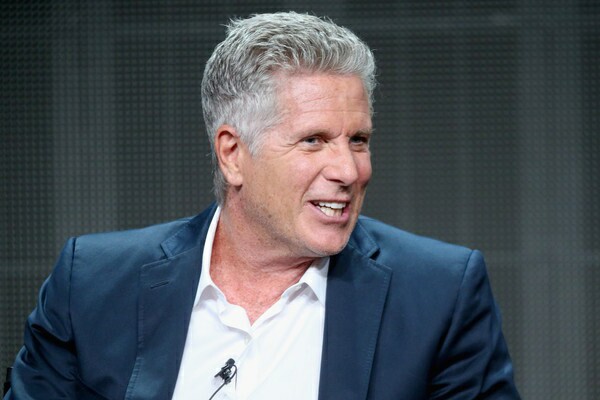 USA Network has been pretty impressive of late, scoring with one of the hottest shows of the summer -- the sensational “Mr. Robot” (about which there has been more talk privately among critics and reporters than just about any other summer or new fall series) – and generating significant interest at the Summer 2015 Television Critics Association tour with its upcoming sci-fi thriller “Colony.” It may be that the network’s famous (and beloved) “blue sky” dramas are becoming a thing of its past. (Frankly, I hope not, but who am I to stop “progress”?)

Still, even with the network on an upswing, it’s hard to imagine anyone beyond media industry executives and certain trade reporters taking much of an interest in USA’s upcoming semi-improvisational sitcom “donny!” starring advertising guru and one-time CNBC talk show host Donny Deutsch.

Anybody who knows him or knows of him has an opinion about Deutsch. USA’s Executive Vice President of Original Programming Jackie De Crinis said it best when introducing his session during NBCUniversal Cable’s day at the tour when she told critics, “Last year, I was asked to take a pitch meeting with Donny Deutsch. People had warned me that he can be off putting, arrogant and a little self-centered. They were not wrong.” De Crinis added that she also found Deutsch to be “funny, charming [and] intelligent” and noted that he utilized all of those qualities “to create a wonderful character for television.”

The sitcom, she clarified, offers a “fictionalized version” of his life, adding that Deutsch improvises his role. She assured critics that everything he says on the show is true to how he communicates in real life. Also, even though Deutsch improvises his role, the rest of the cast is portraying fictional characters and working off scripted dialogue. (Side note: The scenes of Deutsch at home are filmed in his actual Upper East Side abode.)

De Crinis positioned the series as “a satirical send up of media, wealth and romance, blurring the lines of reality and entertainment.”

Deutsch further fanned expectations when he offered his take on the show. “This is really new … in that there is a blurring here between scripted television, talk shows, news [and] advertising,” he said.

In the show, Deutsch will sometimes turn to the camera and pitch products. “I sell shit, you know,” he explained. “And advertisers are paying for it within the show. So the thing for 20, 30, 40 years that everybody has been looking for … ‘Oh, my God, how can we get branded content that actually enhances the content? … makes it funny.’ There’s all of this blurring.”

The show will reflect Deutsch’s approach to success in real life. “I come from the Bill Clinton School of Just Surround Yourself with Brilliant Women,” he laughed. “I actually think women are superior to men. I’ve written that in one of my books.”

Deutsch took a moment to expand on the idea of female superiority. “If you watch a Saturday morning TV commercial for a little girls’ game or toy, at the end the girls are always collaborating,” he said. “They are giggling at the end of their commercial. At the end of the boys’ commercial, a boy goes, ‘I won.’ That’s jerky guys. You know, it’s a zero-sum game where, to me, women are brilliant and smart and powerful without all of the bullshit. I’ve done that in my life, surrounded myself with them. I basically am the butt of the joke in this show and the women kind of rule. That’s the way I see it in real life, also.”

When one critic – a woman – noted that in the show he is surrounded by Millennials, while he is a Baby Boomer, Deutsch couldn’t help but interrupt. “Are you calling me fucking old? Is that what that question was?”

“Yes,” the critic answered, without missing a beat.

“You are correct,” Deutsch laughed.

“In the show, I have these three fantastic assistants who are Millennials,” he continued. “I have three [daughters] in real life; two of them are under the age of 12 and one is 27. I find common ground between people in their twenties, thirties, forties, fifties, sixties a lot more than delineation. Obviously, there are the various topical, cultural little differences, but at the core I think we live in a world where there is a lot more blurring today.

“A big theme of the show is I’m screwing up with social media in every episode, and technology, which is also true to real life, and so, yeah, those are the differences. But I believe people’s hearts and souls aren’t that different as we [grow older].”

Deutsch was self-deprecating throughout. “I’m old, 57, [and] to be able to do something [like this] … USA must have been really hard up to give me a half hour to put on television right now,” he joked. “To get to do this really is just a dream come true. [In the show] I’m more of an idiotic version of myself, but I’m making fun of myself. I’m very self-aware. I’m a kid from Queens and I live this very privileged life. And there’s not a day that I don’t walk into this great house [and] go, ‘How the hell did I get here?’

“The one thing that I was very adamant about [is that] I will make fun of myself in anything, I will be the butt of every joke, but I really feel I’m a good parent in real life, and I wanted to kind of protect that,” he continued. “So even though I stumble, hopefully you’ll see a guy that loves his kids. Even [when he’s] doing idiotic things for them, it’s coming from the right place.

“I’m very aware of how ill equipped I am to do this,” Deutsch admitted. “That’s part of the fun of it, that I’m kind of stumbling my way through it, both in the actual show itself and on the show itself. I think the hybrid nature of it, this incredible blur of entertainment and news and talk and reality and advertising, is just kind of some new math that, hopefully, will get people excited.”