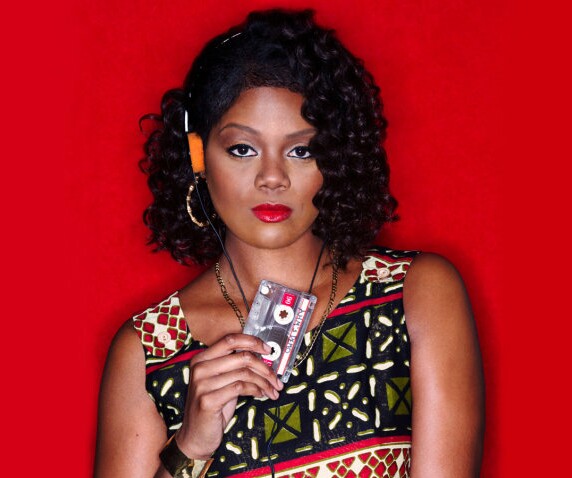 The year is 1990. Hip hop has yet to be widely accepted as more than a passing fancy. Legends like De La Soul, Public Enemy and A Tribe Called Quest comprise just a portion of the auditory tapestry that is the underground scene, and its presence is just beginning to be felt in the mainstream. Industry big wigs don’t think it’ll survive the next five years. A small few however, know that hip hop is the next big thing. This is the setting of The Breaks – the 2016 TV movie that inspired a solid new drama series that premieres Feb. 20 on VH1.

The Breaksfollows the ambitious Nikki Jones (played by the lovely Afton Williamson, pictured at top) who has just moved to New York City to live with her also hip hop-loving boyfriend David Aaron (David Call). Meanwhile, her friend DeeVee (Tristan “Mack” Wilds) is an aspiring hip hop DJ and producer also trying to make it, despite his working class father’s wishes. All this is technically happening in the TV movie portion of the story, but for all intents and purposes the movie serves as Episode 0, with Episode 1 actually picking up right where the movie ends with a “previously on” bumper.

As with any good drama, conflict reigns supreme on this series. The type of conflict that I’m referring to isn’t the usual character versus character; it’s the infinitely more intriguing character versus self. For instance, Nikki Jones is a liar. She isn’t introduced to us that way because she’s the one we’re rooting for -- the girl who bet it all on her passion for a growing, yet unproven, industry (successfully, I might add). Her intelligence, boldness and conviction are never in question, but as evidenced in the initial TV movie, her integrity seems to have an off switch whenever she’s backed into a corner.  This is easy to miss, mainly due to the distracting nostalgia of the ‘90s hip hop soundtrack, parallel subplots and gracefully revealed dichotomy of Nikki’s personality, but it’s there. She is regularly referred to as someone who is real, but almost every success she has can be traced back to a fabrication of her making.

David, Nikki’s boyfriend, is the same way. He isn’t shy about vocalizing his strong resentment of his father and his presence in his life, and yet he lives, presumably rent-free, in one of his father’s apartments. He even goes so far as to turn down the opportunity to get his old job back because he sensed his father had pulled some strings to make that happen. So, your dad can’t help you get a job, but he can let you live in his crib? Because that’s different somehow? This partially committed stand he takes makes every issue David has with the man, no matter how valid, seem tantrum-like in nature.

Barry Fouray, played by Wood “They Cast Me in Everything” Harris, is another good example of these conflicting character traits. Barry’s the owner of Fouray Management -- the company where Nikki intends to work upon her arrival in New York.  At first, he comes off as a bit unstable. He bears all the attributes of the stereotypical industry low life:  He’s constantly surrounded by scantily clad women, has a taste for nose candy and only seems to come around to fire people, which paints the picture of an employer too irresponsible to trust with one’s career.  As time goes on, though, it’s revealed that he’s a good businessman after all.  He’s capable of delegating important tasks to competent members of his circle.  He’s ambitious enough to remain open-minded without putting his company at risk, and he’s serious about the bottom line.  This revelation changes his image from someone who feels impetuous and reckless to someone who, despite some morally ambiguous habits, seems to be a good guy whose head is on straighter than we thought.

The cast also includes some familiar faces, including Method Man as DeeVee’s father, Evan Handler as David’s father Juggy Aaron, Russell Hornsby as Sampson King (program director of a major R&B radio station) and Antoine Harris as Ahmed “Ahm” Harris, a drug dealer who’s just as deadly on the mic as he is in the streets.  Antoine’s most recent previous credit is Ballers, a show for which Seith Mann (creator of The Breaks) served as director for a couple episodes.  Antoine seems to have a knack for expressing emotion with a subtle intensity that rivals the extroversion of Harris’s Fouray character without his performance losing any of its impact.

One of the first comparisons that came to mind when viewing this show was Netflix’s The Get Down.  These two urban dramas both depict fictional events in decades during which their respective musical genres (disco and hip hop) were beginning to bubble over into the mainstream but had yet to be respected as movements. In the case of The Get Down,we’re seeing disco begin its short-lived reign, at a time when hip hop was still in its infancy. Fast-forward about 25 years, and so begins The Breaks. Even though these show aren’t actually connected in any way they share interesting similarities.

Overall, this new series does justice to both the culture it portrays and the TV movie it comes from, all while keeping its audience locked in with complex and likeable characters.  Whether or not those characters are completely good or bad will be left to the viewer, and upon looking past the surface, those may be harder distinctions to make than previously considered. What won’t be in question is the veracity with which this legendary era is represented and the collective talent of this multicultural cast.