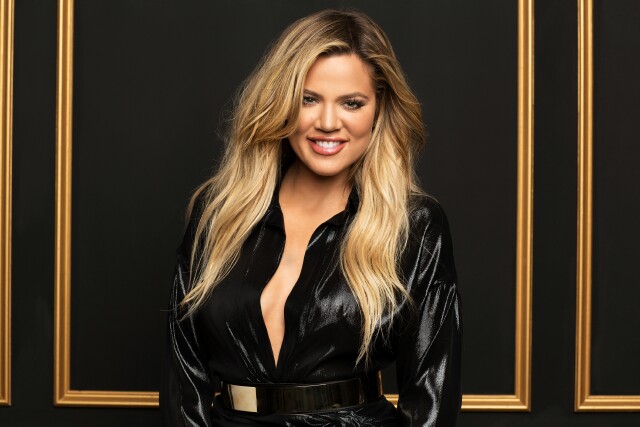 Pasadena, CA – The networks of Viacom, A+E and National Geographic filled the first full day of the 2016 Winter Television Critics Association tour with presentations for a dizzying array of programs that illustrated the breadth and diversity of cable television schedules today. It is not unusual for the cable days at these twice-yearly gatherings to cause a sort of psychic, only-at-TCA whiplash for the critics, reporters and bloggers who attend them, and that was certainly the case yesterday. A prime example of this occurred at approximately 3 p.m. West Coast time, when a panel featuring executive producer Harvey Weinstein and the impressive cast of the upcoming six-hour adaptation of the intimidating literary classic “War & Peace” (set to run simultaneously on A+E, Lifetime and History) was immediately followed by a session with Khloe Kardashian (pictured above), the star and executive producer of the upcoming FYI talk show “Kocktails with Khloe.” Interestingly, within the context of a TCA day, the two panels were equally engaging. (Both series will debut later this month.)

Weinstein and his actors talked about how they utilized Leo Tolstoy’s timeless masterpiece in bringing his characters and their deeply internalized perspectives to life.

Kardashian talked about keeping conversations real and raw when having guests in her home for dinner parties, which is what she is aiming for with her show.

Actually, Kardashian comported herself quite well, even when asked delicate questions about the condition of her husband Lamar Odom. Sitting through her session it was not too difficult to imagine her becoming that most rare of television personalities: A successful female nighttime talk show host. Can it be that FYI and Khloe Kardashian will make television history?

Speaking of history, the network with that name kept A+E’s fast-paced and engaging three-hour session moving with an appearance by former CBS late-night host Craig Ferguson, star of its upcoming talk series “Join or Die with Craig Ferguson.” In the series, set to debut on History later this year, Ferguson will discuss timely topics with celebrity guests and experts on historical matters and events.

Also in the session, A+E Network presented its certain-to-be-buzzed-about upcoming horror series “Damien,” which continues the story of the anti-Christ first seen in the 1976 thriller “The Omen.” Sinister Damien Thorn will be 30 years old in the show; series creator and executive producer Glen Mazzara, a giant of this genre after his years on AMC’s “The Walking Dead,” said the 25 years that lapsed between the kid’s murderous activities at the age of five (in the first “Omen” movie) and his age in the show will likely be filled in via original content that will be created for “other platforms.” (The series will disregard the second and third movies in the “Omen” trilogy.)

The A+E Network monster mash – which began four years ago with the debut of “Bates Motel” – will also include the upcoming drama series “The Frankenstein Chronicles,” starring Sean Bean. A session for that series followed the one for “Damien.”

A+E also scored with a strong presentation for its upcoming 24-hour news and information channel Viceland (which will launch on February 29). The session featured the network’s creative director Spike Jonze and much of its on-camera investigative talent, including Oscar-nominated actress Ellen Page (seen in a particularly powerful and chilling clip).

In a very shrewd move, A+E Networks included a panel with the producers and stars of Lifetime’s “UnREAL,” which in its first season showed up on almost every critic’s Top Shows of 2015 list (including mine). There are few things TCA members appreciate more than a network bringing the stars of shows they have embraced back to tours after those shows have become breakout hits.

The day began with a three-hour Viacom session that included panels for two BET shows, the sitcom “Zoe Ever After” (starring Brandy Norwood) that debuted Tuesday night and the upcoming reality series “Chasing Destiny,” in which singer Kelly Rowland (formerly of Destiny’s Child) seeks to identify a female group she believes will be a future success; the TV Land sitcoms “Teachers” (set to premiere next week) and “Younger” (which will begin its second season next week), and the MTV series “The Shannara Chronicles” (a fantasy adventure that debuted this week and is based on Terry Brooks’ book series) and “Greatest Party Story Ever” (which re-creates raucous true-life stories via animation and is set to begin January 14).

National Geographic Channels rounded out the day with an array of thought-provoking panels that ran the gamut from understanding ISIS to comprehending God. Nat Geo’s session included panels for the movie “He Named Me Malala,” about an 18-year-old Pakistani girl who survived being shot by the Taliban at age 15 because she spoke out about the importance of girls receiving an education in the Middle East and later became the youngest winner of the Nobel Peace Prize (her proud father appeared via Skype); two upcoming editions of the documentary series “Explorer” in which heroic reporters embed themselves with the Kurdish military in its war against ISIS and dangerous poachers in the Congo’s Virunga National Park, and the upcoming series “No Man Left Behind,” about war heroes who were stranded in enemy territory. The panel for the first installment, titled “The Real Black Hawk Down,” featured veterans of the 1993 battle between United States Special Forces and Somali militia in Mogadishu that most Americans know only from the feature film of that name.

There were also panels for the upcoming Nat Geo WILD series “Animal Storm Squad,” about heroic individuals (including veterinary assistants and storm chasers) who rescue trapped animals from areas stricken by natural disasters and reunite them with their families, and National Geographic Channel’s upcoming documentary “The Story of God,” in which Morgan Freeman tackles the titanic title topic by exploring religious experiences around the world.

Image at top courtesy of A+E Networks. The opinions and points of view expressed in this commentary are exclusively the views of the author and do not necessarily represent the views of MediaVillage.com / MyersBizNet, Inc. management or associated bloggers.