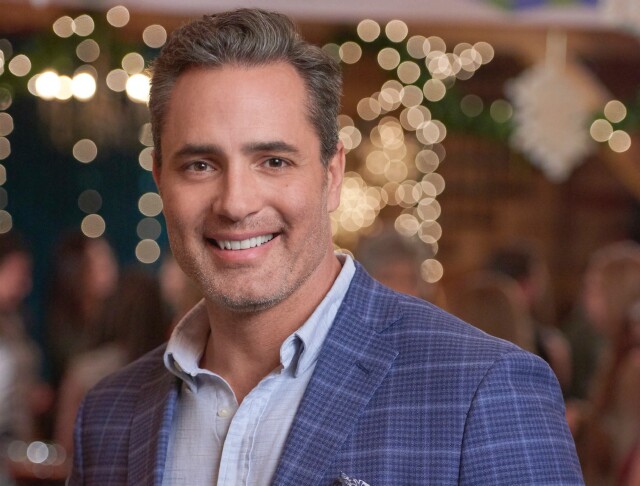 When it comes to his association with Hallmark Channel and Hallmark Movies & Mysteries, actor Victor Webster is doing something right.  Since starring in 2012's Puppy Love, opposite reigning Hallmark princess Candice Cameron Bure, the debonaire Webster has worked alongside such Hallmark favorite leading ladies as Catherine Bell (Home for Christmas), Jill Wagner (A Harvest Wedding) and his real-life leading lady Shantel VanSanten (whom he met filming Love Blossoms).  Now, in Homegrown Christmas, premiering Saturday on Hallmark Channel, Webster finds himself paired with reigning network queen Lori Loughlin (pictured with Webster below). "No pressure there, right?" he laughed during our recent conversation.  The union was, in fact, one he'd been looking forward to.  "Lori is fantastic!" he beamed of his co-star.  "I've watched her work all the way back to the movie Rad she did about BMX racing.  I watched Full House too, so I was really excited and looking forward to working with her.  She was so sweet and nurturing and really took care of everyone.  She treated everyone with such respect and she's so talented as an actress as well.  She's just a good all-around person.

"[Working] is easy with Lori as she's so easy to get along with, willing to play, collaborate and have fun," he continued.  "It was one of the easiest jobs I've had, we just got to show up on set and have fun.  As long as you knew your lines and were prepared, everything else just took care of itself." 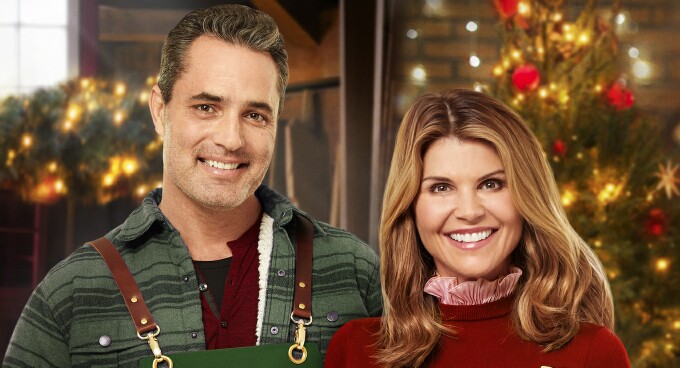 Homegrown Christmas tells the story of Maddie, the successful creator of Madd Shoes, who after selling her company returns to her Claremont hometown to regroup and spend the holidays with family.  The only caveat to the trip is having to come face to face with Carter, the man she left behind to pursue her big-city dreams and hasn't spoken to in 17 years.  Add to that the fact Carter is firmly embroiled in her family’s furniture making business and works closely with her estranged sister Hallie (Kate Isaac), and all signs point to a tension-filled gathering.

"She wanted to leave the small town and become this big shoe designer tycoon," Webster said of Loughlin's character.  "Her beef [with him] would be, 'You stood me up.  You were going to come to New York with me and never showed up, then I never really heard from you again.'

"I think [now] Carter is just jaded towards love and dating," he added.  "His life is great.  He has his niece, his sister and his extended family that includes Maddie's; he loves what he does and he's artistically fulfilling himself with some side projects of his own.  Carter is a small-town guy who didn't want the big city where everyone's a stranger and all that hustle and bustle and you have to struggle to make it yourself.  He just wants to enjoy his life and family and do the things he loves."

According to Webster, he discovered some parallels to himself playing Carter. "You'd think that my life was the opposite," he shared.  "But the more I'm in the business the more I am becoming Carter.  In the next couple of years, I'm [hoping] to move out of Los Angeles, and maybe get a small house in the woods, although probably keep a place in LA.  Just go somewhere where the business isn't influencing everything.  When you're not in the business everything's really about people, sitting down and having conversations and talking, not being on your phone all the time.  It can all get to be a little much."

He also appreciates the fact that his life these days mirrors some of his roles. "My life, literally, is kind of like a Hallmark movie," he laughed at my comparison. "I met Shantel in Belgium doing Love Blossoms and we've been together for about two years now.  So, Hallmark really does make lasting memories, at least for me!  I realize life isn't always like a Hallmark movie and we both know that, but we really try to keep things as simple as we can amidst all the chaos."

Webster's admission of small-town dreams doesn't mean a complete change of pace.  He hopes he and VanSanten will work together again soon and if it happens to be for Hallmark, it’s a call he’ll take.  "It's nice getting the call from Hallmark," he explained.  “I do love working with them.  This is my third Christmas movie.  To be honest, doing Christmas movies is fantastic because they have the best decorations!  It really gets me in the Christmas spirit because they do it so well.  I come home, look at my little Charlie Brown Christmas tree that I put out every year with one ball on it, and just sigh.  If I could take one of those trees as extra baggage, I 100% would.”

Till then, he's looking forward to eating lots of his favorite meal, turkey, and a Christmas vacation to Paris with his lady -- one that may (or may not) include a snowball fight.  "I'm an expert in snowball fights," he laughed.  "I did peg Lori with one [while filming].  I told her I wasn't pulling any punches and if I could hit her with one, I was going to.  In the scene where I’m hit by one, that was thrown by Lori!  It was great and I was so proud of her.  She's amazing!

Homegrown Christmaswill be telecast Saturday, December 8 at 8 p.m. on Hallmark Channel as part of its Countdown to Christmas programming event.