Video: NBA Launches Global “This Is Why We Play” Campaign 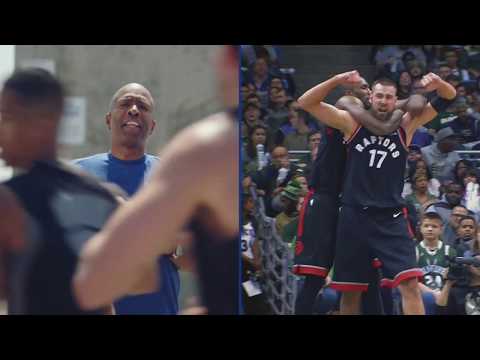 Now in its fourth year, NBA’s “This Is Why We Play” campaign puts the focus on the fans.  This season's debut spot, “Hopes,” launches online today (see video above) and Sept. 28 on broadcast TV during pre-season games.  The NBA Kia Tip-Off will also be supported with paid media across TV, online video, digital, social, radio and OTT.

Created by Translation, “Hopes” asks die-hard fans what they hope their team will accomplish this season.  Like any loyal fan, they want their team to dominate.

Subsequent spots will ask new questions and include cameos from past and present players Paul George, Julius Erving and Walt Frazier; on-air personality Rachel DeMita, and chef Eddie Huang, among others.  Launch dates will be spread throughout the season; in addition, tailored ads will run during Christmas, MLK Day/Black History Month, Saturday night primetime, playoffs and NBA finals.

Pam El, Chief Marketing Officer of the NBA and inductee into the Diversity Hall of Honors on January 9 at the 2019 Advancing Diversity Honors during CES, recently explained the evolution of “This Is Why We Play” to MediaVillage.

“The first year was emotional-based storytelling from the view of the league," she began.  "The second year was anecdotes on players.  The third year we presented 30 different stories -- one for each team -- on what inspires them and was important for fans to know.  This year, the fans are the stars.  Each ad starts with a question.  Research shows that every fan wants their team to win!”

This year’s campaign features the first custom spot to run in Canada -- both in English and in French -- to promote the Canada Series where the Toronto Raptors play the Portland Trail Blazers in Vancouver on Sept. 29 and the Brooklyn Nets in Montreal on Oct. 10.

A Mandarin ad will air in China to promote the China Games -- Oct. 5 in Shanghai and Oct. 8 in Shenzhen -- and the showdown between the Dallas Mavericks and Philadelphia 76ers.

El attributes the longevity of the "This Is Why We Play" branding strategy to strong numbers and a successful platform.  “After a certain period, brands have to decide whether to continue with same brand campaign," she said.  "We have the stats to prove that this campaign works.  [Throughout the 2017-18 season] #ThisIsWhyWePlay generated over 1.9 billion impressions seen, 289 million video views and 94 million actions (likes, comments or shares) -- all increases from 2016-17.  The hashtag was also used more than half a million times on Twitter and Instagram.”