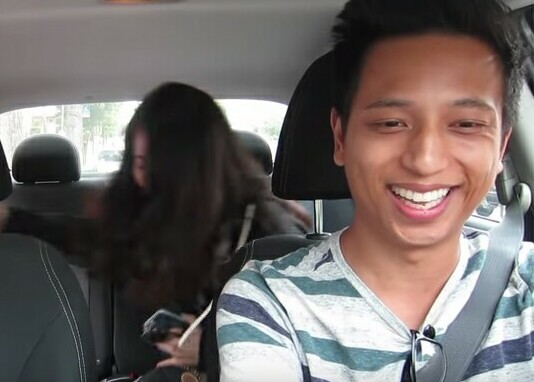 My best Uber experience to date featured a driver who served bottled water and chocolates while she transported me to my destination. It was memorable – as was my first Uber ride, during which the driver got lost and I had to give him directions for the duration of the trip. Still, I think many of driver Jonathan Gaurano’s passengers may have even more vivid Uber memories if the video he recently posted on YouTube is indicative of what it’s like to catch a ride with him.

Unfortunate update: Despite the interest Gaurano's feel-good video generated in The Weeknd's "Can't Feel My Face" and The Weeknd's joy at meeting Jonathan in Toronto (read below), Universal Music Group (his label) insisted that the video be removed due to rights issues. So you can no longer watch it here or on YouTube. You'll have to visit his Facebook page to watch it, or check with your kids to find sites unknown to media professionals that specialize in banned or removed content.

Editor's opinion: This is yet another example of why so much of the music industry is sucking gas. (For what it's worth, I bought The Weeknd's album after watching this video.) Good gravy, why wouldn't UMG or any label want Uber drivers to promote their music at no charge to millions of customers? 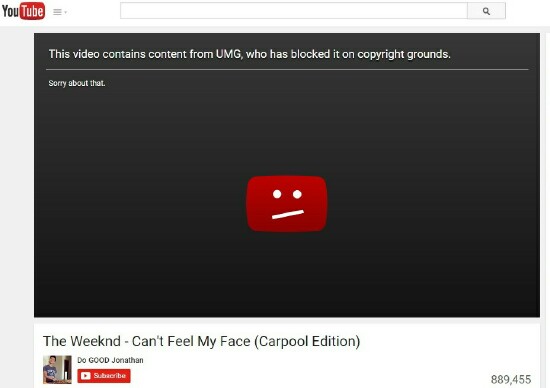 Now, back to our story:

Gaurano (pictured at top) invited a number of his passengers to sing along with him to “Can’t Feel My Face” by The Weeknd, recorded their performances and edited them together into one of the most upbeat videos to come along in a while. It caught the attention of Uber executives, who did something really nice for Gaurano (see below).

Apparently there was some concern expressed in the comments area of his YouTube page about Gaurano’s very expressive singing and car-seat dancing while operating a vehicle, especially while other people were riding in it. At times it sure looks like driving is the last thing on his mind, but never fear: He posted a response on his YouTube page, where he is known as Do GOOD Jonathan, that should put everyone at ease.

Here it is, reproduced in its entirety:

“For those concerned. Please know that my hands were always on the wheel and they were only off the wheel when we were at a red light or stopped. In addition, I made sure that I didn't start the music until we were in the clear (out of traffic). I'm a safe Uber driver!

“Many times I made sure that the passengers and I were either i) at a stop sign when I closed my eyes (fully stopped/no one behind us or in front of us), ii) at their driveway (place of destination) or iii) at a gated place where I could do things ... I was very careful.

“Also -- a couple of them were in a wide and enclosed gated area as I would be dropping them off. I probably got a dislike because of this.

“I totally understand. I care about safety first! I pay a very high premium insurance to make sure all my passengers are covered (just in case knock on wood). I've never been in an accident. (I have been hit while at a gas station and the dude didn't have insurance... so that was a thing.)

“I hope you understand I just wanted to make people smile.

“In addition -- if I wasn't in a safety zone -- then I made sure no one participated. Also - I'm someone who doesn't talk to passengers until they talk to me. So I just sat there patiently, waiting for people to talk to me (just to be polite). I'm a pretty safe driver. Very, very safe. So if you're one of those people who disliked -- just know I worked really, really, hard on this and a thumbs up would be greatly appreciated.”

Well, check this, haters. Gaurano just posted another video – of his Uber sponsored trip to Toronto to attend a concert by The Weeknd (aka Abel Tesfaye) and meet him in person! Apparently Uber executives were thrilled with his video and wanted to do something for him.

The follow up video was here, but now it's gone, too.

Here’s more from Gaurano’s YouTube page about the impact of the original video:

“During the VIP meet and greet with Abel (The Weeknd), I was told by security that I wasn't allowed to take any sort of video selfie.

“However, when I went up, Abel and his team started screaming at me in excitement! ‘Are you the dude who made the video?!?’ ‘Are you the Uber Driver?!’

“Abel came out of his ‘photographer’ zone, went up to shake my hand and gave me a hug. It was then I asked if I could take a video selfie to talk about the video. The storage on my camera ran out right when he said the words, ‘genius’ (which is in the video) ... but this is the interaction and I will remember it till the day I die!"

Gaurano goes on to recount further details of what had to be one of the best times of his life ... all thanks to his decision to become an Uber driver. It's a perfect feel-good story to give us all a lift during the dog days of summer.