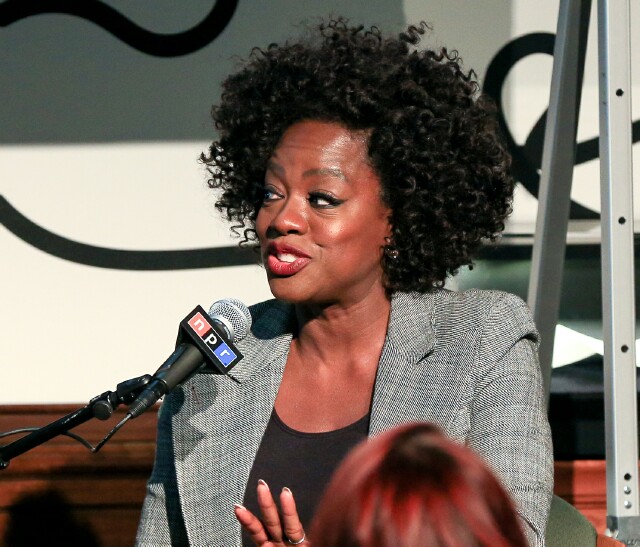 In a wide-ranging interview last week at the 92nd Street Y in New York City, Viola Davis captivated the audience as she defined truth to power and plainly laid out what it has been like for a woman of color to survive and thrive in Hollywood.  (Short answer: exceedingly difficult, but she elaborated.)  Davis managed to take people to church at the Y, which is not expected given that it’s a YM-YWHA, for Young Men’s Young Women’s Hebrew Association.  Her approach worked.  In tandem with Audie Cornish of NPR, who conducted the interview, the actress drew a mixed crowd and had everyone in the room on their feet by the end.

Just as she does on stage, TV and in films, Davis connected with her audience.  Not once during the hour-long chat did a cell phone ring or anyone interrupt.  Instead, people listened to two black women at the top of their fields.  Davis, who understands Hollywood all too well, said, ‘'People do want to see themselves on screen.  I'm saying if I were Caucasian -- and I pray you know what I am talking about -- all I would have to worry about is finding great material." 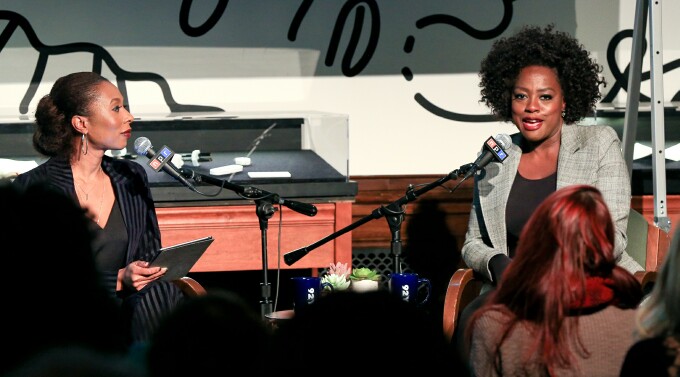 Cornish (above left), the co-host of All Things Considered, asked just enough questions to allow Davis to deliver wonderfully thoughtful answers, responding more in mini essays than sound bites.  She asked the Oscar, two-time Tony and primetime Emmy winner if she sings just so she could land in that elite circle of EGOT winners.  The answer seemed to be not really, but recording an audiobook is not out of the question.  (She  recently wrote a book titled Corduroy the Bear.)

Promoting her new film, Widows, Davis explained how she found her way into her character Veronica, who leads a multi-million-dollar caper.  “Who would go to a life of criminality after a seemingly normal life?” she asked.  “She has nothing -- emotionally, economically.”  Her son and husband are now dead, and she has no idea how to pay the bills or go on.  Desperate, Veronica opts to do the dangerous heist, score the millions and somehow go on with her life.  This logic resounded with people as they nodded, understanding that though a gun-toting thief, this fictional character was still multi-dimensional.

The reason why people in the audience were rapt and agreed with her is that Davis infuses characters with such relatable layers, no matter the role.  Over the years, she has often played a maid, or a drug-addicted mom among the woefully stereotypical parts offered to black women.  Other actors have told her they won’t allow themselves to be typecast.  Ever the wise veteran, Davis retorted, “Okay, you have to get a job first.”

In a career that began on stage after graduating from Julliard, she has worked steadily and even now, at this level of international stardom, Davis acknowledged it is not easy.  She trades neither in false modesty nor braggadocio; instead, Davis tells it like it is.  “It is a business about money,” she asserted.  “Like Denzel says, it should be called business show.”

Noting that Hollywood's favorite color is green, Davis was also honest that people with proven track records tend to get hired because it is so expensive to mount projects.  She and her husband Julius Tennon have a production company called JuVee where they employ all people of color and are "committed to changing the industry."

Once someone is successful in the industry, it carries a whole new set of issues: The demands of celebrity. That includes doing press, working out and looking put together at all times because you never know who’s lurking where.  When paparazzi pounced because Davis dared venture to Target with her head covered and no makeup, she smiled.  She and her daughter, 8, had a great time and Davis, again exhibiting an attitude that cannot be faked, did not seem to care that she was caught without fake eyelashes.

Davis grew up very poor and has spoken openly about going to the library because a librarian shared her lunch with the hungry girl.  She's known true poverty and it's clear she takes nothing for granted.  That gratitude and realization of how far she has come is obvious when she steps on a stage, radiant, and accepts a major award.  Aside from her actual awards, she is the only African-American actress to have received three Oscar nominations for acting.

In Widows, Davis’ character is married to Liam Neeson; a prospect that would not have been considered by many directors, but Steve McQueen of 12 Years A Slaveis not most directors.  Cornish had asked McQueen to describe what makes Davis distinct, and in a clip played for the 92nd St. Y audience, he said, “A great actor can translate humanity and show us ourselves, raw, bare and naked.”

As she reveals the naked emotions of people, Davis reaches deep within herself to create a fully realized woman for each part.  “Each character takes a chunk of your soul,” she said.  That includes her gutsy portrayal of tortured attorney Annalise Keating on ABC's How to Get Away with Murder, a role that was not written for a black woman, Davis noted.

Besides stage, small and large screen, books and now radio, Davis has conquered one other medium -- memes.  The one of her rolling her eyes and shouldering her purse while throwing shade is a constant text response when dealing with the unenlightened.  Cornish acknowledged she uses it all the time and many in the audience laughed, knowing they too employ it.

Davis does not use memes of herself.  As she proved yet again the other night, she does not need to.  Like her work, her voice speaks volumes.