An Emmy Telecast Unlike Any Other Advanced Diversity and Honored Heroes 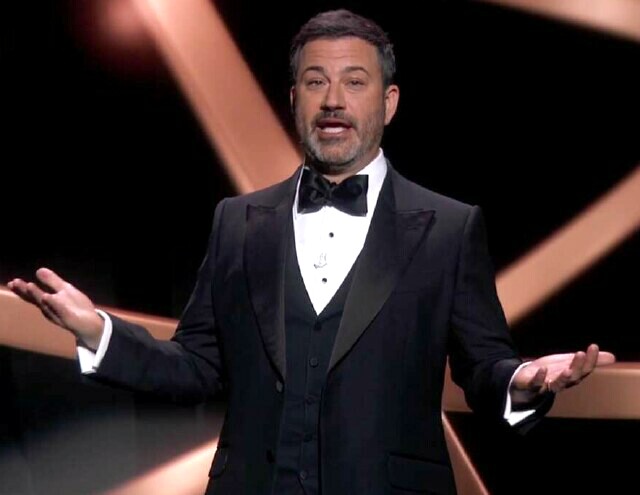 The 2020 Emmy Awards are already a fast-fading memory, so let’s give recognition where it’s due and while we can. At a time when award shows seem completely unnecessary, the Emmys nevertheless managed to put on a watchable show. Could it have anything to do with our collective hunger for something – anything – new on television after months of self-isolation? Is it the timeless appeal of award shows? Is it the growing need we are all experiencing for diversions from the mounting madness of the world right now? Regardless, anyone expecting to watch TV’s biggest night become an epic fail was in for a disappointment. The telecast wasn’t exactly a great event, but it was filled with surprises and it made history, too. Plus, it wisely made room to showcase the participation of several essential workers, reminding us that the real superstars of 2020 are not the celebrities who were busy gathering awards throughout the night, or anyone within their community. And it added to the number of Black actors who were honored with 2020 Emmys last week during the Creative Arts ceremonies, bringing the total to ten, a record for a single year.

Even with restrictions, not to mention playing to an empty room, Jimmy Kimmel proved to be as consistently engaging a host on the big stage as he is on the set of his late-night talk show (or during his annual appearances at Disney/ABC's Upfront presentation.) The Emmys famously went without a host during last year’s telecast, which I recall being tedious throughout, prompting Kimmel to quip, “This is the year they decide to have a host?” He played with equal ease and impact off a wall of screens featuring more than 100 feeds, mostly showing nominated talent at various locations looking relaxed and happy not to have gotten all dressed up to simply sit down; a cavernous Staples Center full of empty seats (except for a few that held cardboard celebrities and, briefly, one with the real Jason Bateman), and the occasional socially distanced star on stage.

So that was all good, but, it has to be said, it was beyond thoughtless for a live show emanating from Los Angeles to feature an extended (and not at all funny) bit about a fire (that actually flared a bit out of control, or so it seemed) while so much of the West Coast is burning and tens of thousands of people are coping with the horror of that, from loss of homes to loss of life. I can’t believe that Kimmel went along with it, nor his bit partner Jennifer Aniston. Further, the inclusion of silly pandemic jokes throughout -- on the very weekend when the U.S. death toll from COVID-19 surpassed 200,000 -- were insensitive and inexplicable. 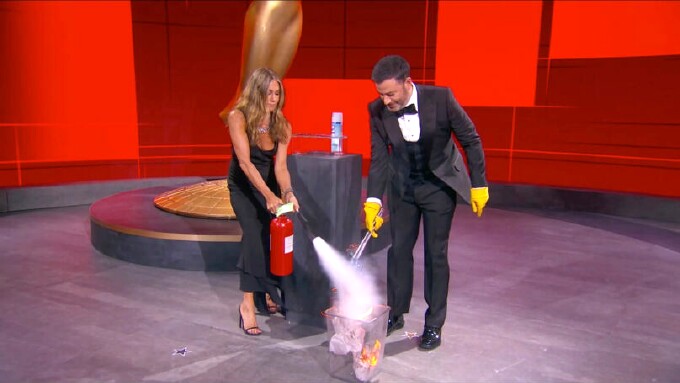 But let’s talk happy talk. Even though Kimmel cracked at the top that with 100 different video feeds coming in throughout the show from all over this country and others, “What could possibly go right?”, I don't think anything went wrong. It was, in fact, fun watching people win awards at home, or at small parties, like the Schitt’s Creek mini bash, where there was cause for celebration over and over and over again. The level of Emmy love for the show, which resulted in a Schitt’s Sweep, locates it in the Emmy history book alongside such other sitcom record-breakers as The Mary Tyler Moore Show and Frasier. I'm not sure it deserved quite that expansive an embrace, but I'm happy for everyone involved. Thank goodness the show came and went before ViacomCBS took the hook to scripted original programming on Pop.

Among the drama categories, the awards for HBO’s Watchmen and Succession -- each of them timely in very different ways -- were well deserved and very satisfying. (There is no arguing with Regina King's award for Watchmen, but I wish she had tied with Cate Blanchette for her epic turn in FX's Mrs. America.) A second consecutive win for Julia Garner of Netflix’s Ozark and the first win for Zendaya of HBO’s Euphoria caught everyone by surprise (including both performers) and destroyed anyone’s chances of having accurately guessed all the top categories.

And speaking of surprises, the reunion of Friends stars Jennifer Aniston, Courteney Cox and Lisa Kudrow and appearances by David Letterman and the beloved Bob Newhart were exactly the unexpected touches that TV fans want in their award shows. Finally, the In Memoriam segment was one of the most tasteful and touching in years, from the thoughtfully positioned clip of Regis Philbin at the beginning and to one of Chadwick Boseman at the end. What better way to say goodbye?