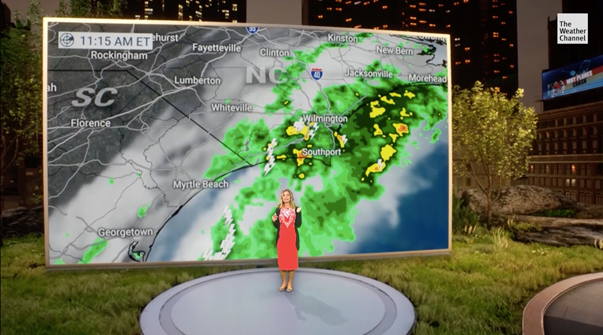 Two of the most dynamic forces in the world, weather and technological innovation, synthesize to create captivating immersive experiences via The Weather Channel's state of the art IMR (Immersive Mixed Reality) studio. What started six years ago as a casual discussion on the use of Augmented Reality (AR) evolved into a complete green screen set-up to immerse The Weather Channel's talent within virtual environments and is now a multi-level studio that brings volumetric storytelling to an exciting and future-forward experience. The Weather Channel television network is using the studio several times per day with increasing velocity, across the entire spectrum of content, from breaking weather to long-form shows.

The network's Senior Director of Weather Presentation and Meteorologist, Mike Chesterfield, is quick to credit the entrepreneurial and collaborative culture at The Weather Channel in embracing and moving forward with a significant investment (of both time and financial resources) into the IMR Studio. Says Chesterfield, "Once we explained what we were going after to enhance the consumer experience, the editorial leadership saw the possibilities and not only bought in but helped to lead the charge." 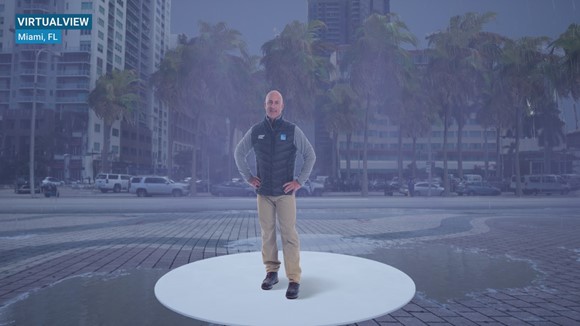 Chesterfield notes that part of the raison d'être of The Weather Channel is to tell the future, yet, as he points out, "there is no video for the future. We can use this technology to actually present the weather and show what it will look like in the future."

The studio consists of an exceptionally large green screen space with several cameras including a Technocrane camera that is hooked up to a tracking system which allows the simultaneous capture and integration of the virtual studio and the talent. Multiple computer systems "do all the hard work", and a staff of design experts work on the graphics daily. 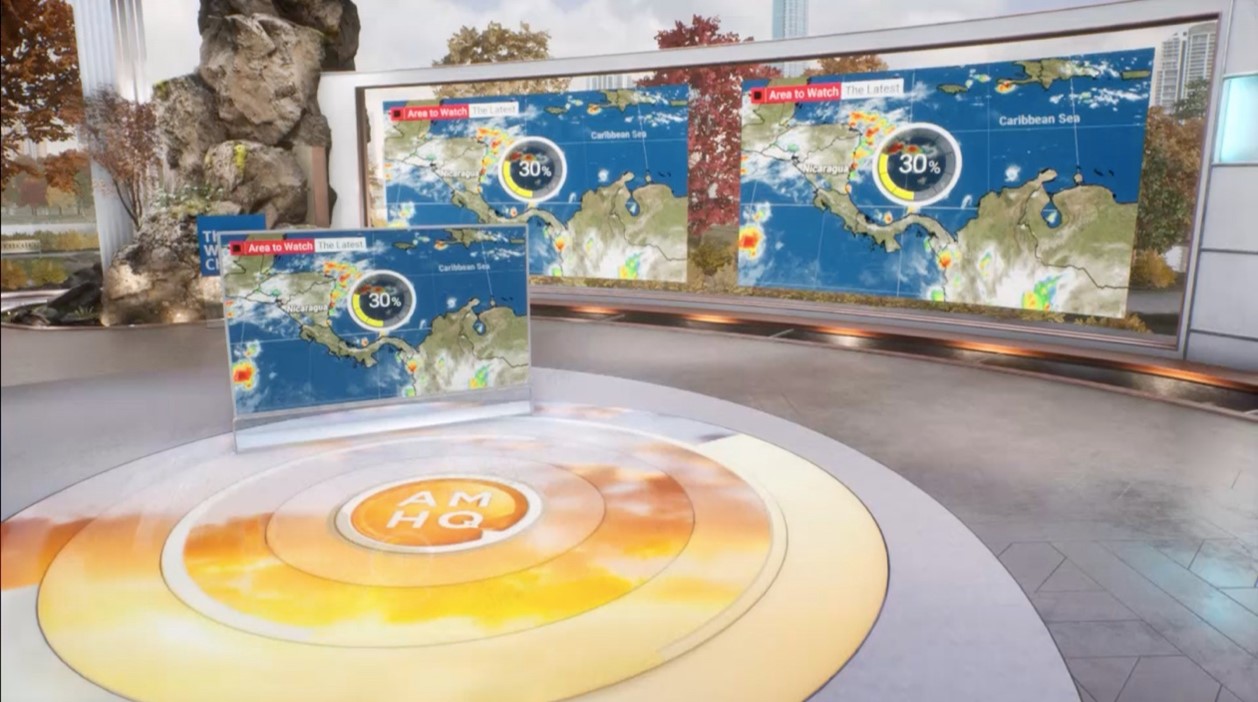 Several criteria were instrumental in determining which technology and what best practices would be in place to deliver the optimal realism and engagement with the viewer. "First and foremost, the graphics need to feel and look as real as possible. That's the only way the audience is going to buy-in," said Chesterfield. "Having the graphical capabilities of the Unreal Engine and being able to integrate that to build out our studio was incredibly important. From a workflow process and production end, we looked at technologies that we could bring in-house that would allow us to produce television, on a day to day basis, in a different way that would fit into our workflow."

Working with volumetric video and augmented reality, in real time, presents a completely new level of choreography for meteorologists who are accustomed to standing in one place. Now, they are walking around the perimeter of a hurricane or around a snow drift. Says Chesterfield, "We work with everybody from the director to the camera operators to the talent. It's not just the individual talent knowing exactly where to stand, but it's also the positioning of the camera to get the shot we want. Where can the talent walk? Where can they not walk so, we don't break the illusions that we have set? There is a lot of pre-planning and post-production that takes place, but the talent has really absorbed it and has reacted really well to it." 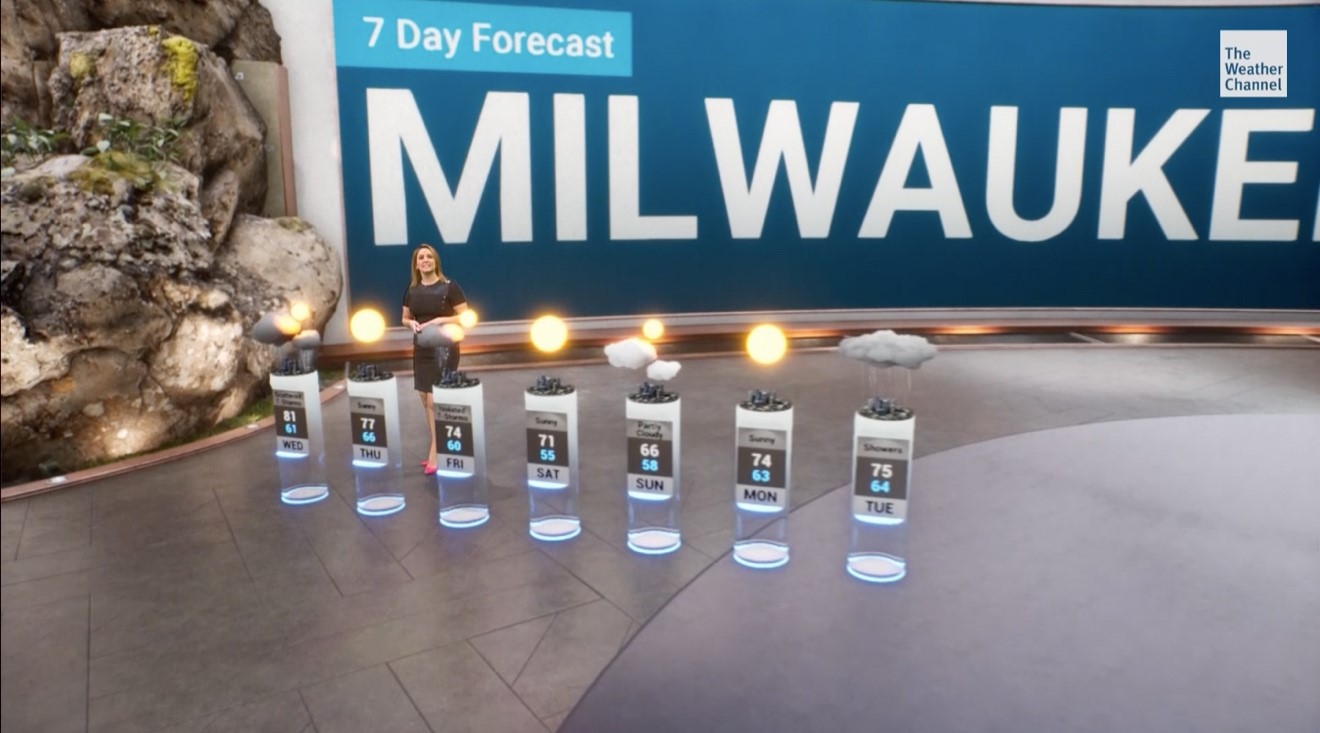 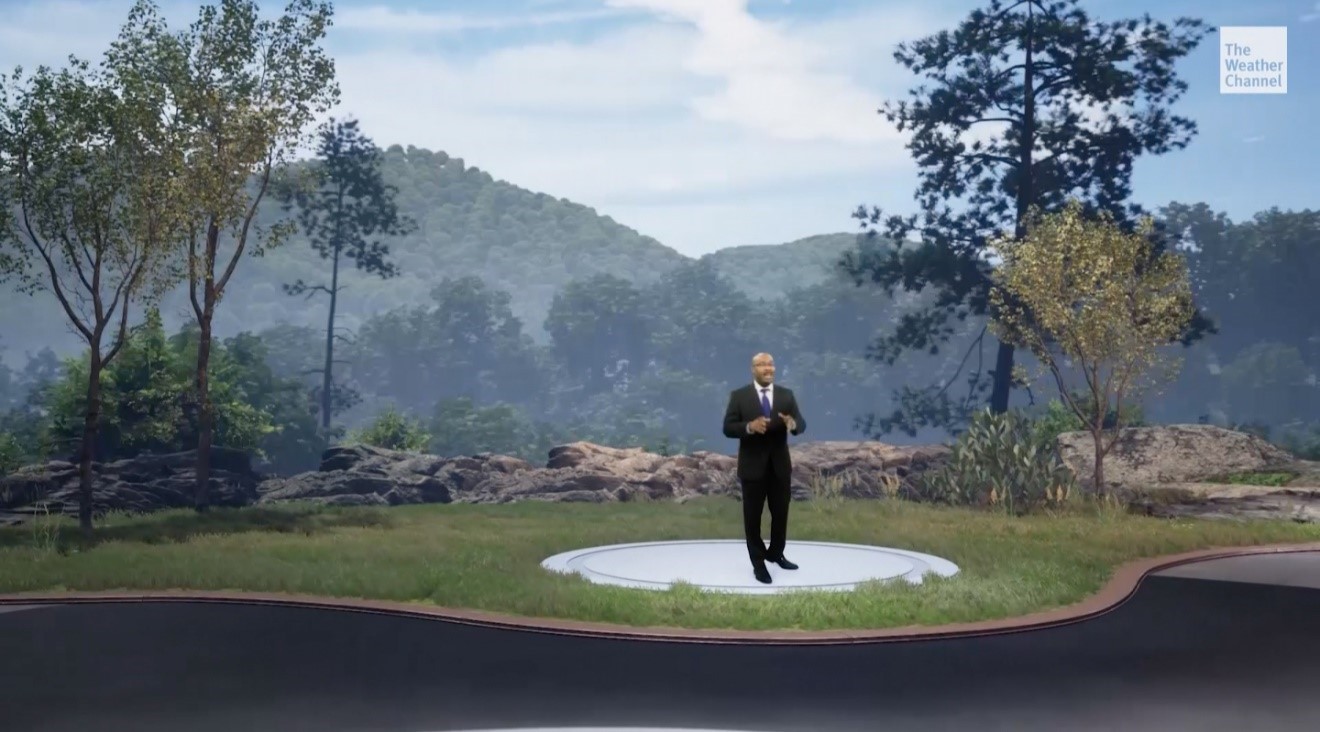 Most importantly, consumers are expressing their satisfaction with this new type of weather storytelling. Chesterfield shares that "the feedback, through social media, has been eye-opening - everything from when we do our storm surge effect explainers during hurricanes, to putting our talent in the virtual studio up against jumbo monitors that just wouldn't exist in the physical studio space - the audience sees how cool it looks, but they also tell us that they finally understand a topic, which tells us we are doing something right." 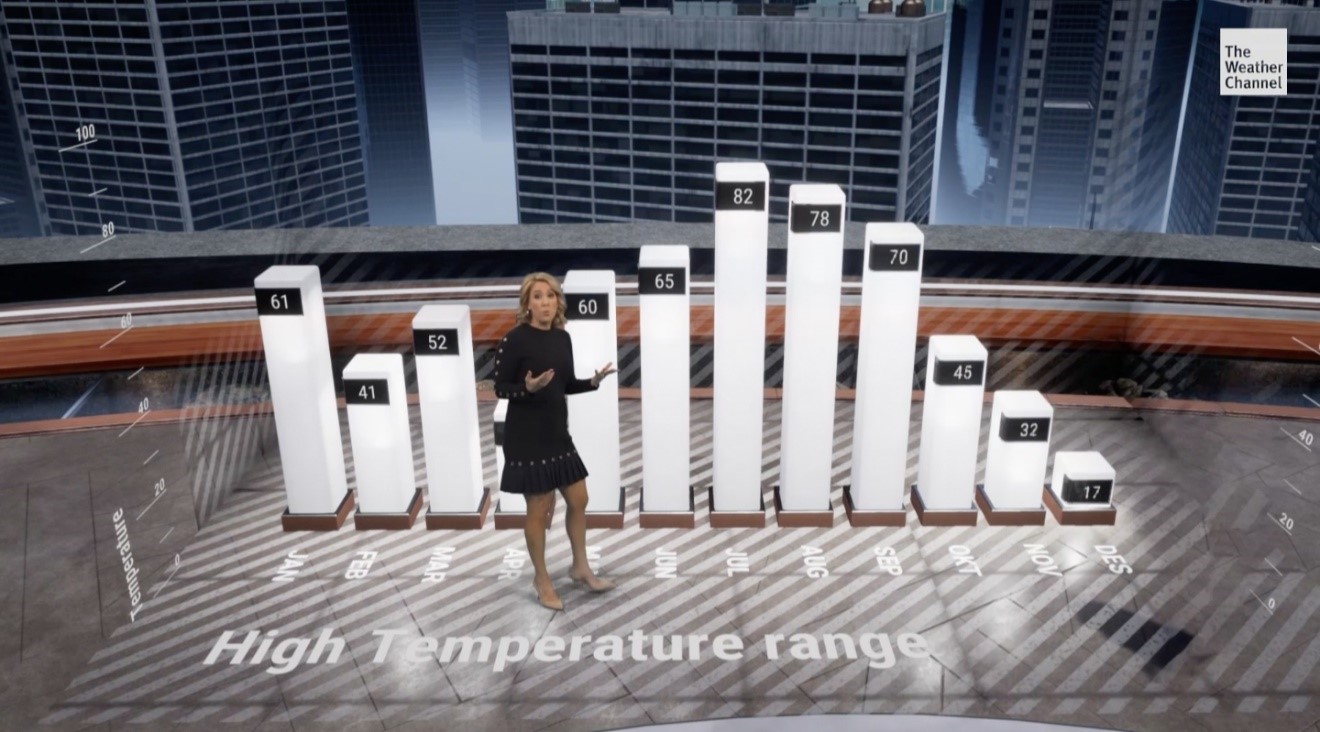 With both the positive reaction from consumers and the eye-popping visuals that the studio produces, advertisers have started to take notice. "We have the ability to bring up virtual monitors and show branding in a traditional way, but we also have non-traditional ways where we are able to integrate branding and sponsorship into background images or into the environment itself. In our Cityscape environment we have billboards. If you are looking for a subtle way to promote something, that's one way we can do it. Brand sponsorships and integrations are definitely where we see the trajectory in the near future." 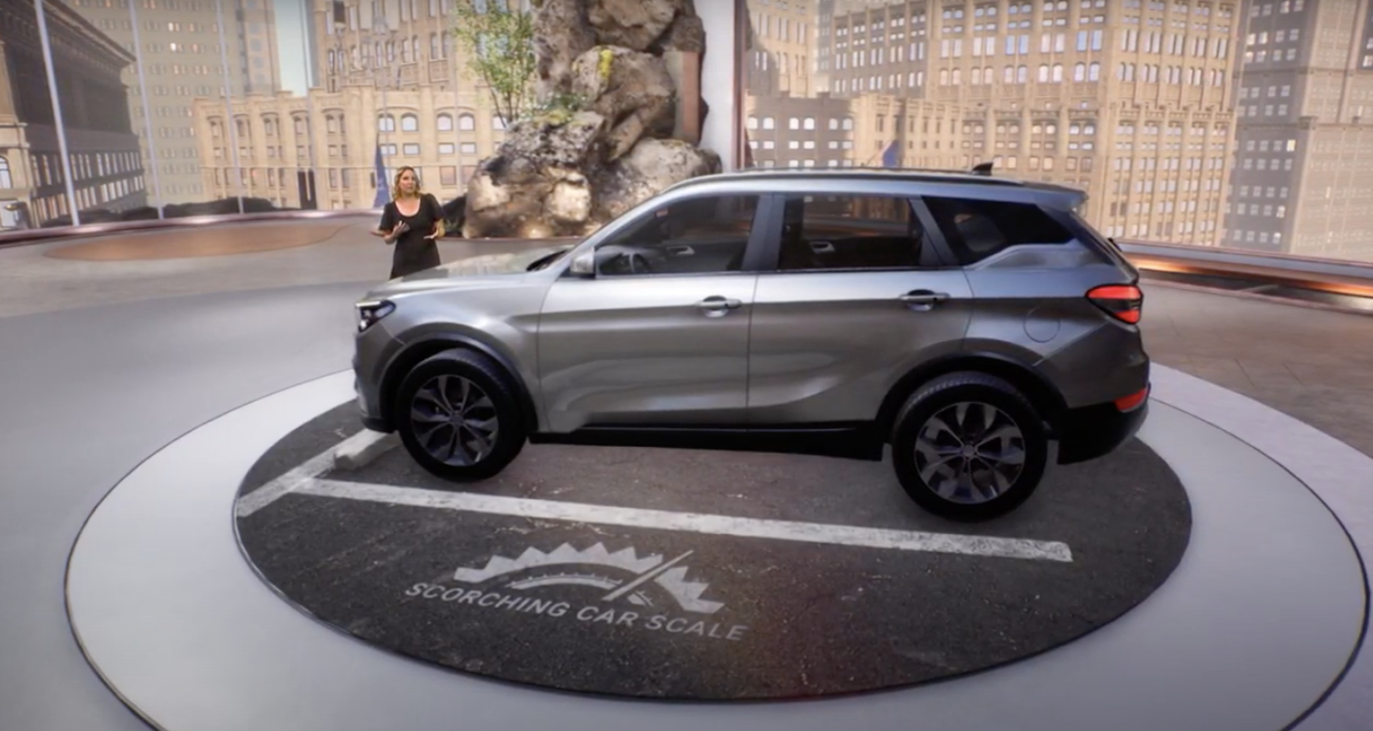 What's next on the roadmap for the IMR Studio? "The truly amazing advantage of the virtual studio is you can bend reality. You can do things that are just not possible in the physical world," Chesterfield stated. "In the coming weeks, we are going to be able to provide virtual views of cities across the country where we'll actually be able to integrate a talent into these 360-degree images and place them in an environment which will actually show what the weather conditions are going to look like without even leaving the building." 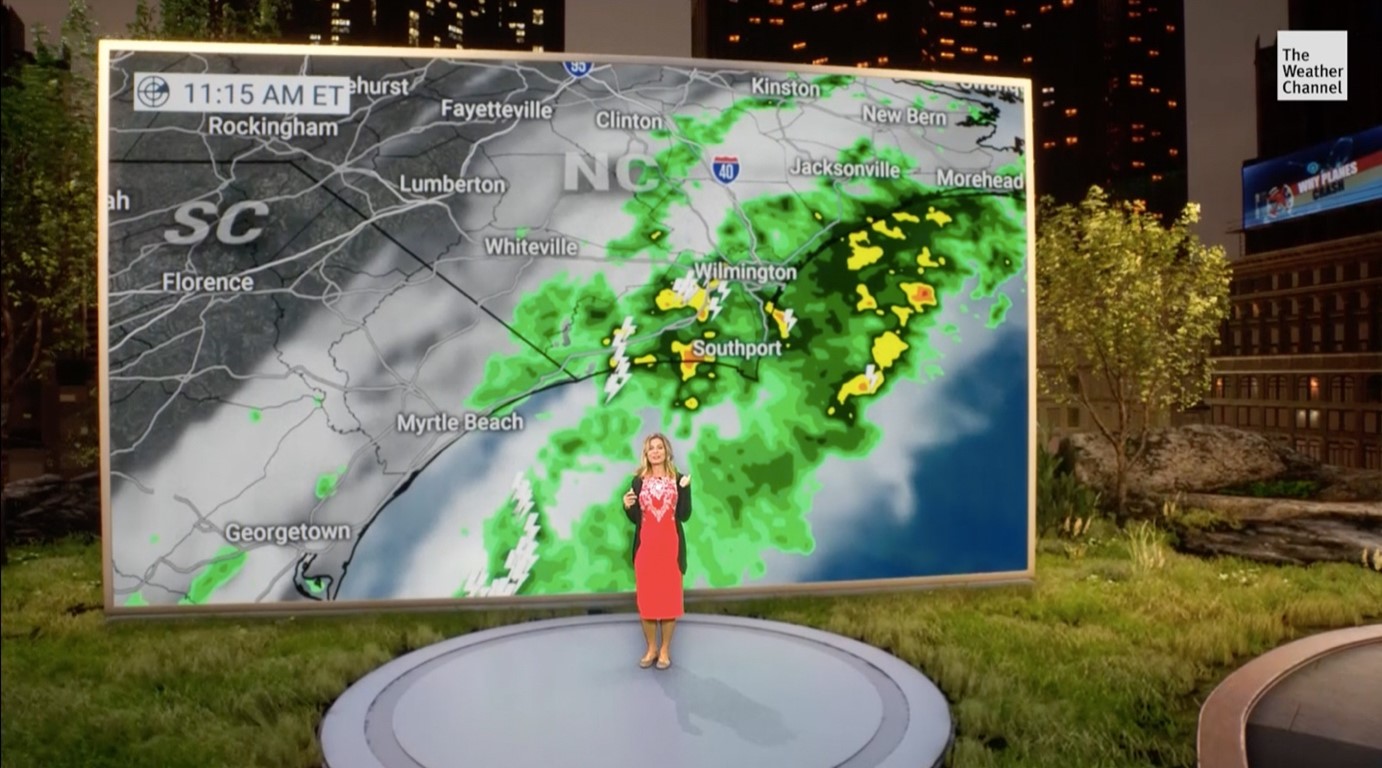 While the current IMR Studio is producing for the 2D TV space, the renewed growth of VR through the success of Oculus, coupled with the anticipated release over the next 12-24 months of AR hardware from Snap, Apple and Facebook ensure that The Weather Channel's commitment to innovation will have them well-prepared. As a content producer, Chesterfield shares "it is really exciting because it opens the door to all types of possibilities for new areas of storytelling and it allows us to invite the audience in for different experiences."

With the investment and talent that The Weather Channel has put into their IMR Studio, the forecast is clearly sunny with more than a chance of innovation.

See the inside of The Weather Channel's new IMR Studio below: