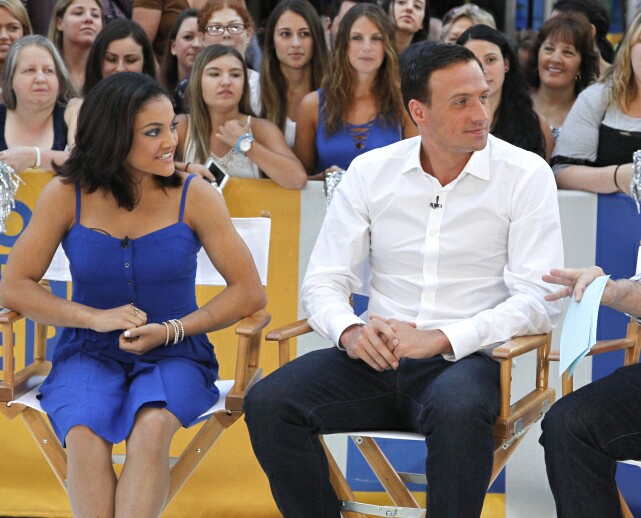 Maybe it’s the heat and humidity. Maybe it’s just the dog daze of it all. But given that the last week of August is a time when nothing much is supposed to happen in television, two things have been making me think more than I really want to right now. The annoyances are pretty much everything about MTV’s VMA Awards and Ryan Lochte being cast on ABC’s “Dancing with the Stars.”

It has become an annual ritual to complain about the Video Music Awards – remember the field day critics had last year after Miley Cyrus hosted, or the year before after Miley’s wild and crazy performance with Robin Thicke during the show? But this year seemed to set a new low both in entertainment value and, of greater concern, negative messaging to young women. I realize I’m not in MTV’s target demo, whatever it is meant to be these days, but with one or two exceptions (including Nick Jonas singing about bacon) the musical performances throughout this event were no fun at all. Aren’t the VMAs supposed to be a celebration? With all due respect to Beyonce, 16 minutes of heavy messaging wasn’t welcome in an already painfully overlong show. And four performances by Rihanna? Her considerable gifts and grace aside, wouldn’t two have been enough? Other than in medleys, has any performer ever dominated a VMA show with such frequency? I don’t think Madonna, Michael Jackson, Prince or anyone else ever did that.

Speaking of Madonna, my appreciation for her bold, boundary breaking performances throughout the ‘80s and ‘90s continues to grow as time marches on. She repeatedly shocked us all during a host of infamous MTV Awards appearances (including her seductive performance of “Like a Virgin” at the very first VMAs, which I attended), but nothing she did ever came off as desperate. The same has been true in recent years of the similarly theatrical Lady Gaga. But it seemed that almost every female performer at this year’s awards felt the need to bare as much skin as possible on camera, as if their talent and beauty weren’t enough to ensure continued fan support. There were more heinies on display than during CBS’ annual telecast of the Victoria’s Secret Fashion Show.  It isn’t necessary for talented women singers to rely on skin to fortify their popularity, is it? Let's ask Taylor Swift.

I watched with a group of friends that included women who would be classified as Baby Boomers, Gen X’ers and Millennials. By the time Beyonce spun around and bounced her behind with all the vigor of a youngster hoping to be noticed rather than the supreme ruler of all she surveys, they were all complaining about the unrelenting sex and skin throughout the event that threatened to eclipse the musical talent on display. That ridiculous segment with Kanye West, followed by a video of a largely naked woman -- a toxic blend of boring blather and egregious exploitation -- was a real problem for them. To my great relief the Millennials were particularly put off. Variety reported earlier this week that ratings for these awards were disappointing. It's not hard to understand why.

During a recent Lunch at Michael’s interview, former MTV creative titan Van Toffler, who was the executive producer of dozens of award shows during his decades at Viacom, told Jack Myers and me that the VMAs were his favorites. “I love chaos and I love live television," he said. "Musicians are uncontrollable. They’re not like actors. You can look a musician in the eye and say, ‘I need you to be at this spot in the middle of the song’ and they’ll say ‘Uh-huh’ and then do whatever they want. People would say to me, ‘Why would you keep having Kanye West back?’ I’d say, ‘Because I have no idea what he’s gonna do!’”

Sadly, there was no discernible chaos during this year's show. Frankly, it would have been welcome. Things may have gotten out of control at times during Toffler’s reign, but the VMAs were rarely boring and almost always fun. This year’s show was as heavy handed and oppressive as the weather in the northeast throughout much of this long hot summer. Even Kanye was s snore.

Plus, commentators Keegan-Michael Key and Jordan Peele were as unfunny as Neil Patrick Harris when he hosted the Academy Awards. Maybe they should revive their reliably entertaining show on MTV's sibling network Comedy Central. (On the other hand, those infrequent appearances by the fantastically funny Nicole Byer and Jay Pharoah all but saved the show.)

Moving on to the biggest media snore of late, Olympic swimmer Ryan Lochte (pictured at top with fellow Olympian Laurie Hernandez on Good Morning America), isn’t it a bit soon for The Walt Disney Company or any other conglomerate business to assist in repairing the damage he willingly did to his own reputation, not to mention America’s overall presence at the 2016 Summer Olympic Games? Am I ill-informed or did he and three fellow swimmers not allegedly commit crimes (public urination, vandalism) in another country with different laws, and did he not then spin a web of lies about the outcome? (I have only the American news media from which to piece together the facts, so forgive me if I’m confused as to the true details of the situation.) Think of the deep doo-doo the rest of us would be in if we did the things he is said to have done (and has largely admitted to). Like it or not he is now the official poster boy for the Ugly American, and not even a gold medal will help him live that down. Is the situation with the police department and city government in Rio even resolved?

Viewed in this context, isn’t ABC’s decision to include him in the cast of the wonderful Dancing with the Stars as desperate a move as all those ladies thrusting their bare behinds at the camera throughout the VMAs? According to Lochte he had agreed to do Dancing before the scandal broke. Well, that was then and this is now, and he hasn’t even fully dealt with his bad behavior yet. He got drunk (his words) and eff’d up big time. He seems to be contrite. But now he needs to put on his big boy pants and do some heartfelt damage control, at home and abroad, and he needs to do that without an American television network taking him by the hand as if he were some sort of enabled Millennial utterly incapable of solving any problem that can’t be fixed via a quick message on social media.

Will his inclusion on the show attract new fans or repel loyal viewers? It likely won’t matter, because all reality programs this fall (and everything else, for that matter) will be eclipsed by the biggest televised annoyance of all: The Presidential Debates.