The greater the number of individual consumers who watch a network, the greater the value the network brings to its advertisers and distributors, and ultimately to its owners. For this report, we looked at monthly data on reach from Rentrak from the beginning of 2011 to the present and can see that TV's reach has generally held up over the past several years, with the vast majority of American households watching each of the largest broadcast networks, whose dominance over cable networks continues.

TV: Reaching To the Converted

The greater the number of individual consumers who watch a network, the greater the value the network brings to its advertisers and distributors, and ultimately to its owners. For this report, we looked at monthly data on reach from Rentrak from the beginning of 2011 to the present and can see that TV's reach has generally held up over the past several years, with the vast majority of American households watching each of the largest broadcast networks, whose dominance over cable networks continues. Cable is growing, of course, and most network groups own properties that at least a near-majority of the population watch in the course of a given month. The value of reach helps illustrate why most programmers will continue to exercise strength in their negotiations with distributors and will help explain the relative capacity that different networks have to capture shares of national TV ad spending. 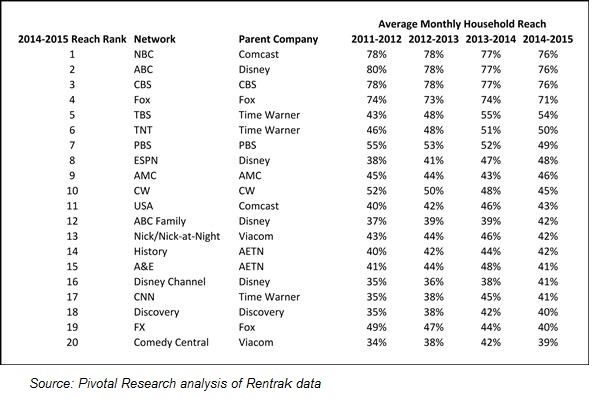 For advertisers, reach is an essential metric because agencies typically plan budgets on the basis of optimizing the reach and frequency with which a campaign will be run against specific audience targets. In a fragmented universe of options, the media vehicle with the greatest reach will, all else equal, always be the most efficient place to spend money. Everyone involved would rather have higher ratings for a given level of reach of course, but there is a significant benefit that follows from the broader (and potentially better-paying) advertiser base that wider reach brings, as wide reach means that ads will be delivered to the same consumers fewer times which can make for a more efficient buy. Although there is an academic argument suggesting that there is no such thing as too much reach (under the premise that a consumer who watches a lot of TV needs a lot of commercials to maintain the impact of those commercials) our inclination is to believe that efficient reach (and therefore breadth from individual suppliers) is critical to big brand advertisers.

Not incidentally, there are few individual digital media owners beyond Google and Facebook or ad networks that can come close to providing comparable household reach vs. large and mid-sized cable networks with video, even when aggregated across a wide range of publishers and with different context around which ads much run. Although absence of comparably "premium" content is probably a more important factor impacting the potential for online video to capture advertising budgets (and the modest scale in terms of available ad inventory is important, too) the relatively low reach of individual properties and very high frequency associated with online video is another factor which will limit the appeal of online video to advertisers.

At the other extreme, we note that FXX was only the 51st highest rated network but was the 23rd widest reaching one; Comedy Central was the 38th highest rated network and 17th widest reaching one; and FX was the 37th highest rated network but the 16th widest reaching. Wider reaching venues, such as broadcast networks in particular, help advertisers aggregate more reach than they can anywhere else, both because broadcast networks aim to produce something for everyone, and because there is a solid percentage of the population that only has broadcast TV (and even those who are poor are still desirable to advertisers who use TV as an advertising medium, whether because they are young or because they still purchase consumer goods). Wider reaching networks will generally be more appealing to advertisers because they can support a more efficient and less duplicative buy. This reach advantage largely explains why broadcast networks continue to capture a disproportionate share of advertising budgets, and also is why they effectively set the industry's pricing during the Upfront negotiating season.

There is no clear cut-off as to how much reach is too little to remain relevant, but we think that gaps between reach and ratings will remain critical factors which help explain the potential for a given owner of television properties to grow their businesses through traditional and emerging distribution platforms now and in the future.

This report has been edited. THE FULL REPORT INCLUDING DISCLOSURES CAN BE FOUND HERE: Madison and Wall 4-10-15.pdf