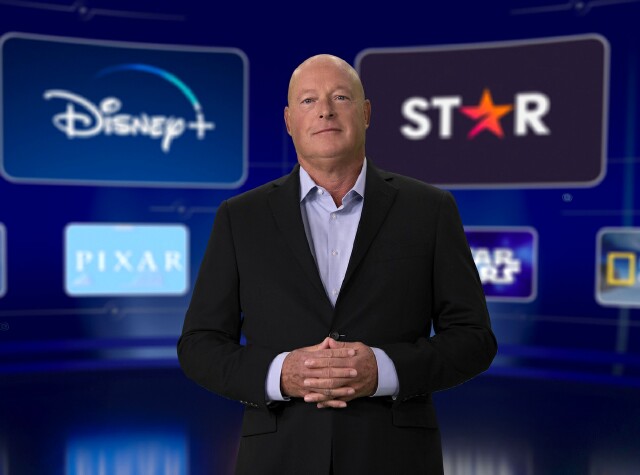 In 1954, Walt Disney became the first big maker of theatrical content to enter the television medium. Instead of selling their portfolio of classic features, cartoons and short subjects somewhere and reaping revenues that way, Disney bet on original content directly for TV. Within four years, the company had a three-on-three track record on originals -- weekly anthology seriesDisneyland and adventure sagaZorro, and The Mickey Mouse Club weekday afternoons. All ran on ABC, which Disney would acquire decades later.

With 2020 coming to an end, Disney is making the biggest TV bet of its existence. Through a spectacular four-hour plus investor presentation with more than 300,000 people watching live, company executives led by Chief Executive Officer Bob Chapek had a clear message for them and everyone in the entertainment industry. Direct-to-consumer services, directed to consumers generally through smart TV products, is the centerpiece of our current and future, and channeling a massive amount of first-run programming that way is our path to sustenance going forward.

"This will enable us to deliver great stories," Chapek declared while standing in front of a virtual Cinerama-like diorama setting. "Our goal is to serve consumers in the best way possible. Constantly challenge the status-quo and take bold risks."

All three Disney direct-to-consumer ventures -- Disney+, Hulu and ESPN+ -- will see Herculean leaps in original content spending, collectively around $16-18 billion, between 2021 and 2014, when officials project break-even or profitability for all three. Disney+ alone, which just a year ago anticipated offering 50 original titles (series/specials/made-for-TV movies) per year beginning in 2021, now will run more than 100 original titles per year through mid-decade, and that annual output may be raised before then.

Amid the bombardment of content announcements from one Disney executive after another during the presentation, ABC -- a catalyst in Disney's TV breakthrough decades earlier -- was given only one moment in this spotlight. That was when ESPN Chairman Jimmy Pitaro disclosed that the network will take over coverage of Saturday afternoon Southeastern Conference football games in 2024 from CBS, as part of an overall pact making ESPN and ABC the home of all SEC college sports.

The procession of original content disclosures also suggests that many key Disney units are all in with generous contributions to this new initiative, especially with Disney+. Take Marvel Studios, now promising to make at least 10 new series for Disney+ between now and 2024. At least half of those programs -- half, starting with WandaVision, which begins January 15 -- will be available by this time next year, with a new series premiering every two months.

Lucasfilm's contribution will be 10 Star Wars live-action and animated series during the next few years, including two spin-offs of Emmy-winning Disney+ hit The Mandalorian. In her presentation portion, Lucasfilm President Kathleen Kennedy confirmed a TV series adaptation of fantasy film Willow is in play, and suggested more non-Star Wars productions are in development.

As for Pixar, which up to now has never produced a major TV series for any Disney TV vehicle, that cutting-edge animation outlet will deliver an original Disney+ series each year, starting with Dug Days (based on a character in Up) next fall.

Hulu had a fair share of content news to make inside its slice of the presentation, including more series out of FX.  Even so, some revelations were left out, including FX going ahead with a two-season bio-drama covering the rise of The Rolling Stones.

For all the details emerging from Disney's multi-hour investor showcase, there are some interesting questions about this content push awaiting answers:

**Although numerous announcements of on- and off-camera talent of color were featured in the presentation, there was no mention of Disney's just-announced effort under Freeform President Tara Duncan to establish a new home base for series creators of color. Where does that assembly fit into Disney+, Hulu and ESPN+'s future?

**When Disney+ raises its monthly fee by a dollar to $7.99, how long will that last?

**At some point will Disney+ offer an ad-supported version, similar to such mega-content competition as Peacock and (soon) HBO Max?

**Do all three services have interactive content up their sleeve, as more smart TV products allow viewers to control them by voice and remote control?

One certainty: This era of plentiful, diverse TV is only, under Disney's new guidance, going to get more plentiful and diverse.