What’s the Best Target to Set for Your Auto Advertising? – Bill Harvey 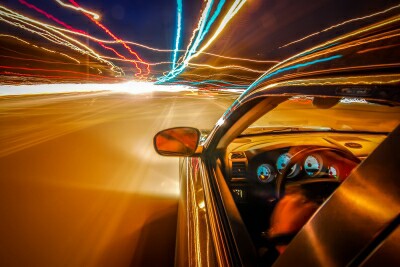 In Byron Sharp’s classic How Brands Grow he cautions advertisers against selecting media to focus on current customers to the exclusion of prospects. In auto advertising, then, this would suggest not selecting TV programs that reach your current owners so much as owners of the class of car in which one competes.

First, what target have people been using? “25-54 $75K+” or “25-54 $100K+” appear to be the two most popular buying targets for cars. Agencies also look at, and adjust the buy based on MRI, Simmons or other long-timeframe product usage data, and/or fusion (demographic prediction in most cases) with their own survey-based custom segments. The biggest complaint agencies have about MRI is the recall-based and somewhat old TV data and the sample size which allows stable breakout by make but not by model.

Nielsen has new car owners and these data are also highly useful. But the Nielsen sample size does not allow usable breakouts by make, let alone model.

Enter new services such as TiVo research (TRA), Rentrak with set top box data and some form of auto registration data. Kantar Media uses set top box data matched to J.D. Power's top 25 market POS data. TRA uses actual unmodeled Motor Vehicle Bureau registration data as compiled by Experian for every car bought or leased in America since 1992 and continuously updated. Rentrak uses modeled Polk data which Polk claims is 73% identical with the actual car in the garage. This creates a new wave of something better, being experimented with for the last few years by all the top auto buyers.

OK, so now that we have these great new data, is it practical for the first time to ask the question, “Which target should we use?” Should we just try to reach buyers who own our make? Should we try to reach buyers who own our make and the makes we consider competitors? People shop for specific body types, so don’t we have to set the target in some way to reflect the model as well as the make(s)? This becomes a complicated question to answer.

The answer, we submit, is this: Ad dollars should be spent to reach people with whom that message has a high probability of making a positive difference to get that person to buy that car.

We should not send messages to people who will not be affected by the message. That is obvious, but so what? How can we know which people to send it to then?

The probability that a person will listen to a message is something that can actually be reliably predicted, once you know the cars they have bought in the past.

In the diagram below the point is all about probabilities. From the actual data we know that the probability of a member of the 25-54 $100K+ group (the biggest ellipse) buying your make of new car (the smallest ellipse) averages around half a percent based on the number of cars sold or leased new each year in the U.S., just counting the major advertised makes/models.

Now if you just wanted to get your current customers to come back and buy this year’s version and you use addressable media including direct mail, among that group you average around a 60% probability of getting that to happen, so doing that definitely makes sense. So we have already come up with one answer as to the ideal target: It’s your current customers. Obviously you can’t stop there. You have to go out and do conquest to get buyers from the rest of the big ellipse. How do we decide which ones those should be? 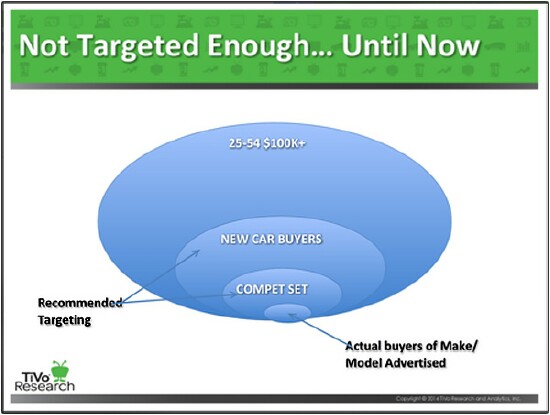 Experian defines clusters of makes/models that compete with one another. Evidence exists of switchers from one to the other within the set. People shopping for one are shopping for the other.

How do you find these people? Based on the cars they now own and/or have bought in the past and the programs they watch on television. TRA/Experian also have a cookie link solution that is privacy pure. If they have owned Volvos and Audis in the past then that home is a target for those two makers plus others who see those makers as competitors.

The probability is that the makes a home is now shopping for can be predicted pretty well from the makes they have bought before. Therefore use data to find and target these people, plus your current customers, but stay within the universe that has bought a new car before.

Is this approach then the one that is most pragmatic today? No, because advertisers have been using people not household data for a half century and therefore the currency is based on things like 25-54 $75K+ because that way the advertiser knows that an adult was actually in the room when the ad was on the screen, and said adult was in the right age and income bracket. The optimal pragmatic approach today, where regardless of the appeal of the straight-purchaser targeting, what is required is the optimal way to integrate the purchaser data and the Nielsen target.

Perhaps the simplest method is the two-column approach. In this method, MediaOcean’s extra column is used for the purchaser index for the client make/model’s competitive set. Double optimization is used to create a list of programs that win on both CPM sex/age target per Nielsen, and on the Competitive Set Purchaser Density Index. Obviously the same method can be used for any other product category, and we know of major agencies that are very successfully using this simple technique today. Its main advantage is that it is the natural first transition step toward a more complete integration of ROI predictors into the CPM calculation so as to create the most ROI-lifting buy possible, ideal for future programmatic application. 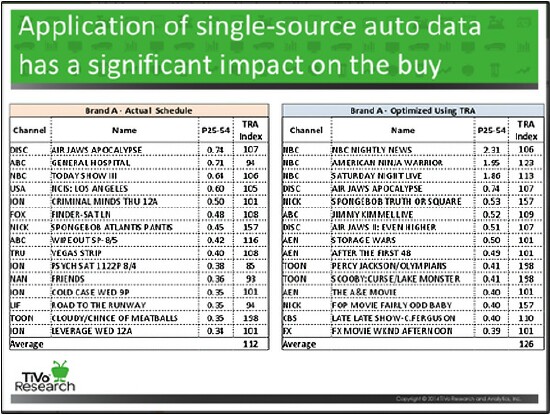 The agency supplying the anonymized actual case study data shown here allows this anonymized quote: “In changing the buy we made sure that we lost nothing in terms of reach frequency against the buying target (sans auto weight). We lost nothing. However we now had a buy that was 26% more efficient at reaching high-ROI prospects than a random buy, and 14% more efficient than the buy we would have made without the TRA make/model data for the second by second TV audience of each network. Since the ads are great and the product even better, raising the probability of influencing the most convertible prospects by that large a degree is sure to cause an ROI lift. The agency’s prior studies have consistently shown this.”

And we see this scheduling metamorphosis consistently for every brand and model: 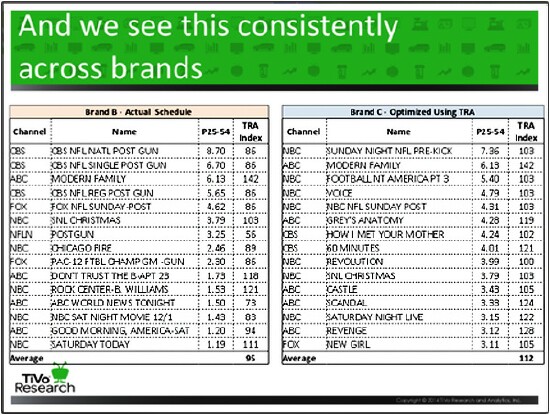 Here you can see that we have lost nothing but gained much: 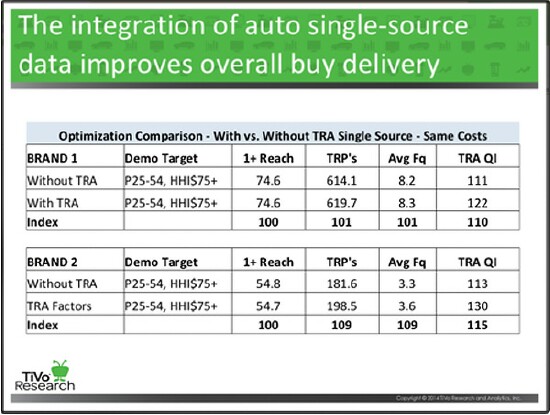 In short, here is our takeaway:

My personal takeaway is that the two-column approach is a classic example of media research ingenuity in gaining great ROI advantage by means of the simplest possible change in the workflow.

[Editor’s Note: On June 9, The ARF presented Bill Harvey with the first ever Erwin Ephron Demystification Award in honor of the late media planning theorist, Erwin Ephron. This award is 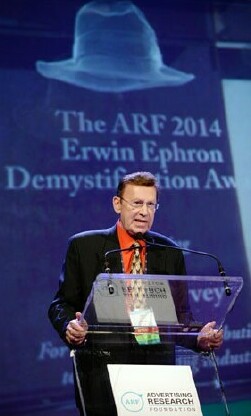 based on an individual’s demonstrated good sense and sound judgment about the business, on their communication ability as well as excelling in at least one of the practices of challenging thinking, creative ideas and translating ideas into action to name a few. Congratulations, Bill!]