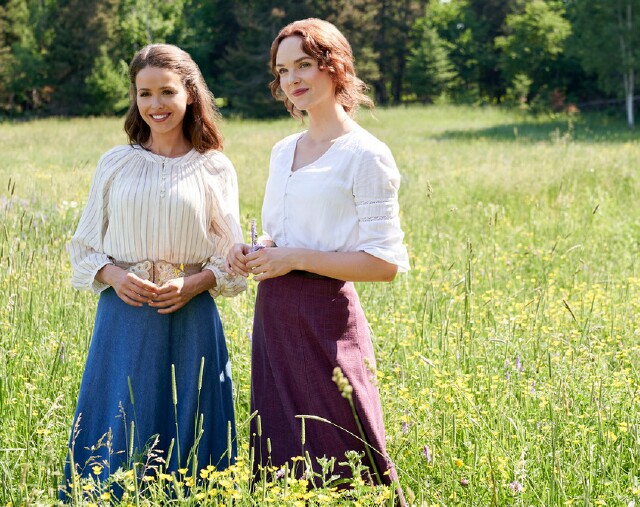 Hearties rejoice!  If you were disappointed that the When Calls the Heart spin-off, When Hope Calls, was relegated to Hallmark Movies Now (Hallmark Channel’s streaming digital platform), Christmas has arrived in September, as the linear Hallmark Channel will telecast the series’ first two episodes this weekend.  Billed as a special “One Time Presentation,” this special peek at the series is sure to attract anyone that was a little hesitant about signing up for yet another streaming service.  (Over on HMN, episode five of the ten that were filmed begins streaming tonight.)

Series stars (below, left to right) Ryan-James Hatanaka (Constable Gabriel Kinslow), Morgan Kohan (Lillian), Jocelyn Hudon (Grace) and Greg Hovanessian (Chuck) have been hard at work on the series in North Bay, Ontario, for the last three months, and they couldn't be happier about this additional exposure for their show.  “We're very excited for people that haven't [seen us] on Hallmark Movies Now to get the chance to come into our world,” Hudon said when MediaVillage sat down this week with the foursome.  “I really do think they'll get a little taste and fall in love with it. With kids going back to school, it's a great family show everyone can get together and watch on a Friday night.  It's fall, and it's a good cuddly show!” 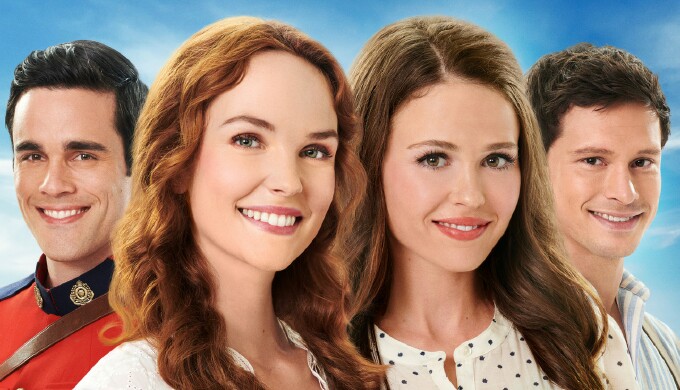 “It may have been a little intimidating for some viewers, who [know we] are half-way through the season and may not know where we [are in the story],” Kohan noted.  “So this is a nice introduction, where they get to watch on the Hallmark Channel and feel they can catch up.”

"Getting as many Hearties on board is the goal, and with this, we can do that and that is amazing!” concurred Hatanaka.  “We love it.  The Hearties are such a passionate force!"  (Hearties are the passionate fans of When Calls the Heart.  Fans of When Hope Calls already have a name, too.  They're known as Hopefuls.)

In the spin-off, reunited sisters Lillian and Grace have just opened New Hope Orphanage, only to encounter resistance from the townspeople of Brookfield.  And while we don’t want to give away and spoilers, the cast insists the two episodes will leave Hearties wanting more.  “So much happens in the first two episodes!” shared Hudon.  “There’s also a mystery right off the top, and something gets lit on fire!”

“A lot of comedy and a lot of plotlines are established in those first two episodes,” added Hovanessian.  “Action along with the introduction of some romance.”

“You get a really good taste of all the characters that inhabit Brookfield, where we are set,” shared Kohan.  “You will see crossover characters from When Calls the Heart, too, as we have a few in the second episode.” 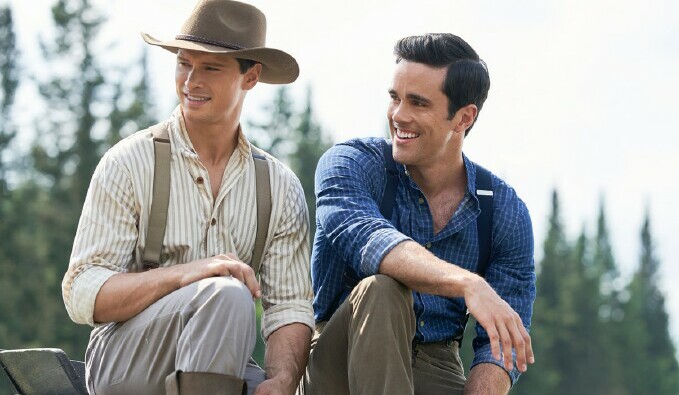 According to RJ (Hatanaka), as he likes to be known, series showrunner and writer Alfonso Marino and his team have built a rich world full of interesting characters viewers will get to know and love throughout the season.  It was also a world the actors were delighted to inhabit during filming, with those having appeared on When Calls the Heart, happy to compare the two.  “Working on When Calls the Heart was awesome,” said Hudon.  “They are a very established set and very real for us, as every detail was there, like the bakery.”

After spending an evening with the four cast members, one big takeaway is how close they all are, which bodes well for an extremely pleasant work experience.  “That all started in the make-up trailer and during lunch,” recalled Hovanessian.  “We'd all get together and bond."

To get to know each other better, the foursome rented a nearby cabin for a weekend together.  “As we’re are all housed in North Bay, where we shoot, we thought it’d be a great way to further bond,” Hatanaka explained.  “North Bay is a great town to go out together in and explore -- and [this] a great group of people.”

With production wrapped on the first season, the fun as a group hasn’t ended for this cast.  As they readjust to normal life, after living in the past for three months, all but RJ (who has prior commitments overseas) will be headed The Hilton Hotel, Vancouver, for the Hearties Family Reunion.  It’s a fan gathering and a celebration of both Hallmark series that runs October 4-6.  “That's going to be really exciting,” said Kohan.  “Joslyn and I were at the last Hallmark convention for the launch of When Hope Calls, and no one knew a lot about it then.  It's exciting to be going back [now that] people have seen a bunch of the episodes.”

“Also, having seen the love and support we’ve received from the Hearties online, it'll be really nice [for them] to get face-to-face time,” offered Hatanaka.  “We've had some great messages.  It's rare to start a show and have a massive fanbase sending you love.  To have been spun off from such a great show is both unique and awesome.”

“Other than people wanting it to be on Hallmark Channel, we have seen nothing negative about the show,” said Hudon in closing.  “And now it's going to be there – well, at least the first two episodes!”

The special presentation of When Hope Calls will be telecast Saturday, September 21 at 9 p.m. on Hallmark Channel.  New episodes of the series stream Fridays on Hallmark Movies Now.