“When They See Us”:  A 30-Year-Old Horror Story for Our Times 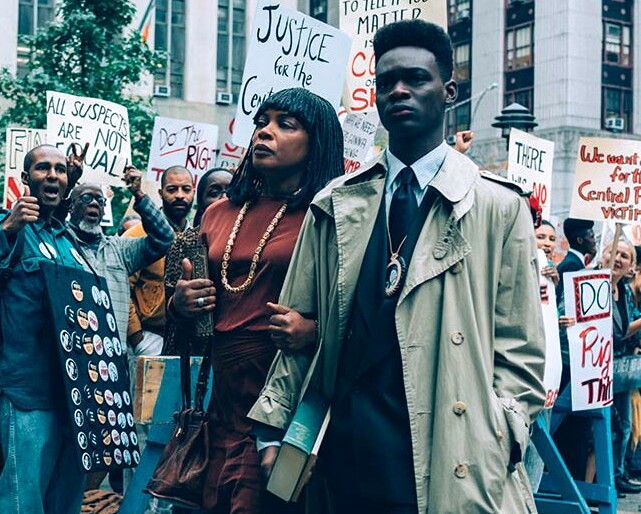 I was a little over a year old in 1989, and while my childhood was just beginning, the childhoods of five innocent black boys were being abruptly ended.  That year, on April 19, Antron McCray, Kevin Richardson, Yusef Salaam, Raymond Santana and Korey Wise (all between the ages of 14 and 16 years old) were wrongfully accused of, and arrested for, the brutal rape and beating of a woman in Central Park.  Made out to be monsters, and treated like animals, these kids -- kids who look like me, and my son, and my brothers -- were infamously dubbed the “Central Park Five.”  Thirty years later, we’ve been given a chance to revisit this debacle of a case by Ava DuVernay, writer and director of Netflix’s new four-part limited series, When They See Us.

Unlike a straight-up documentary, the scripted drama When They See Us (which is more of a film split into four parts than a series, according to DuVernay) takes a more humanizing approach when telling this tragic story of prejudice and unprofessionalism.  The story introduces each of these now exonerated men, then boys, as they truly were at the time; young, naïve and innocent.  I’ll never forget how I felt at a screening two weeks ago when I sat there watching this story that, I’m now ashamed to say, I’d only heard of in passing prior to that moment.  My heart dropped into my gut and stayed there for the entirety of the first episode, not only because I already knew enough about the case to know this wouldn’t work out well for the five boys, but because history and personal experience have taught me that dealing with a bunch of white cops usually doesn’t work out well for people of color in general.

I honestly felt like I was watching a horror film.  Every step taken, every decision made, by both the victims (Antron, Kevin, Yusef, Raymond and Korey) and the aggressors (the NYPD), was another nail in these boys’ coffins.  I wanted to yell at the screen.  “Don’t go in there, man!” “Stop talking!  Ask for a lawyer!”  The anxiety was almost too much.  Unfortunately, I had about as much control over what would happen next as these boys did, which was none.  Separated from their parents, and abused, not only physically, but mentally and emotionally as well, these kids were coerced by the NYPD into confessing to crimes they didn’t commit, all while having their names and reputations destroyed by the media.

New York’s Daily News described the group of black and brown boys as a “Wolf Pack.”  Ed Koch, New York City’s mayor at the time, called them “monsters.”  Donald Trump, the same orange nugget who is somehow now POTUS, took out a full page ad calling for a reprisal of the death penalty in New York.  The death penalty.  Against children.  In a related interview with Larry King that same year, Trump was also quoted as saying, “Maybe hate is what we need.”  Shocker.

All of these feelings, this complex emotional and mental reaction from me, are a direct result of my viewing of When They See Us.  It is a cautionary tale, if nothing else.  A lesson that another generation will be wiser for having learned through the medium of a four-part miniseries on Netflix as opposed to learning the hard way, as these five gentlemen unfortunately had to.  Not only that, though.  DuVernay’s goal was to show the world that these men, then boys, are people.  They have families, dreams and feelings.  They have hopes, and fears, and people they love.  They cry.  They bleed.  I mean, this all feels like stuff that should go without saying, but does it, really?

Since my first detailed exposure to this true-life nightmare was through When They See Us, now, when ingesting the 2012 PBS documentary The Central Park Five (by Ken Burns, his daughter Sarah Burns and David McMahon) or any other information on the topic, even when the most recent images of any of these men are being shown I can’t see their adult faces.  What I see today, thanks to DuVernay’s depiction, is the terrified gazes of children.  I see Asante Blackk as young Kevin Richardson being assaulted by the police despite the black eye already given to him by one of their brothers in blue.  I see Ethan Herisse as young Yusef Salaam being vigorously interrogated without an adult, and Marquis Rodriguez as young Raymond Santana trying to convince his father that he’ll be okay, thinking he’d be fine in all this.  I see Caleel Harris as young Antron McCray, his father begging him to just do what the police say in a desperate but ill-fated attempt to protect him.

Most of all, I see Jharrel Jerome, who plays not only a young Korey Wise, but an adult Korey Wise as well.  I see his young face as he’s lied to about his rights, coerced into making a false confession and sentenced to 5-15 years in prison.  From the day he was picked up by police in 1989, he would remain in police custody for the following 14 years.  I don’t see a “monster” or a “wolf” in a “pack,” nor do I see some “thug” or a “mugger.”  I see a kid, someone I was like, someone my son looks more like every day, getting sandbagged, because “when they see us,” some people see whatever works for them.

The point is, it’s easy to read a headline, or get just part of a story and quickly jump to a conclusion, especially when stereotypically trusted sources are the ones giving you the little bit of information you do have.  But in a society where perception and public opinion matter more than actual innocence or guilt, the responsibility of objective and fair professionalism and integrity on both the parts of the police andthe media become just that much more important; especially when it comes to historically disenfranchised groups of people.

Is this a call to action that will be heard?  Historically, no, but When They See Us does do the heavy lifting required in the effort to restore the stolen humanity to the reputations of The Central Park Five.  That’s not who they really are.  Again, their names are Antron, Raymond, Yusef, Kevin and Korey.  They are people, and they are innocent, and if we are to prevent the system from failing others as it failed them, then we need to acknowledge where and why it failed, so that we may understand how to fix it.  When They See Us is an unmistakably integral step in that direction, and I plan on showing it to both of my children.

When They See Us debuts on Netflix on May 31.