Where Are We in Addressable TV? MediaVillage Polls Agencies and Marketers

Addressable television advertising is poised to reach $3.7 billion in 2020 and the industry is primed to realize its impact on the marketplace.  In order to accelerate its adoption, leaders of addressable advertising will need to bridge the knowledge gaps among agency and brand decision makers as uncovered by an exclusive MediaVillage study.  So how knowledgeable are agency executives on the advantages of addressable television versus linear?

MediaVillage surveyed nearly 1000 advertiser and agency executives via an online questionnaire in June/July.  Respondents rated their knowledge of addressable television compared to linear; the importance of it to the future of media and advertising; their current business interest and the leadership of select companies in advancing industry interests in addressable television.  MediaVillage member company subscribers can download the detailed report below.

Thirty-eight percent of agency executives consider themselves very knowledgeable about addressable TV (based on top 3 box ratings on a 10-point scale), with the majority (53%) in the middle range, indicating a shaky confidence that could impact on addressable TV's adoption. We can assume that AT&T's highly visible launch of Xandr and the accompanying market outreach should contribute to increased knowledge among agency executives.

While just over a third of agency executives consider themselves very knowledgeable on the subject, nearly twice that many agree addressable is very important/relevant to the future of the media and advertising business.  Sixty-three percent of agency respondents surveyed rated addressable television as very important/relevant (top 3 boxes) suggesting that they recognize its value more than their own grasp of the subject.  Very few (4%) felt that this advertising form had low importance (bottom 3 boxes).  For leaders in addressable, this presents an opportunity to educate an already engaged audience -- they have already bought in, they just need to have a better understanding.

It's a slightly different story for marketers.  Notably, addressable TV's messaging has penetrated agencies more effectively than brands.  The study found that agency executives felt more secure in their knowledge of the format with only 9% reporting low (bottom 3 boxes) clarity on the subject compared to 22% of marketers.  The differential in perceived high importance between agencies (63%) and marketers (55%) indicates that more work needs to be done to reinforce the value of addressable TV among brands and to get them off the fence.

"It's logical that agencies are more knowledgeable," explained Jack Myers, Media Ecologist and Founder of MediaVillage.  "But the disconnect among marketers between using addressable and their knowledge is notable.  The industry could be doing more outreach among marketers to ensure that they feel confident in their agency's use of addressable advertising, reinforcing decisions to increase its use."

As companies work to educate decision makers on the addressable television landscape, which are getting the credit for actually moving the needle forward?  Among those polled, DirecTV leads the field with 60% of agencies and 51% of marketers ranking them high (top 3 boxes) in industry leadership.

While actual rankings varied slightly between agencies and marketers the top 10 companies were the same for both groups: 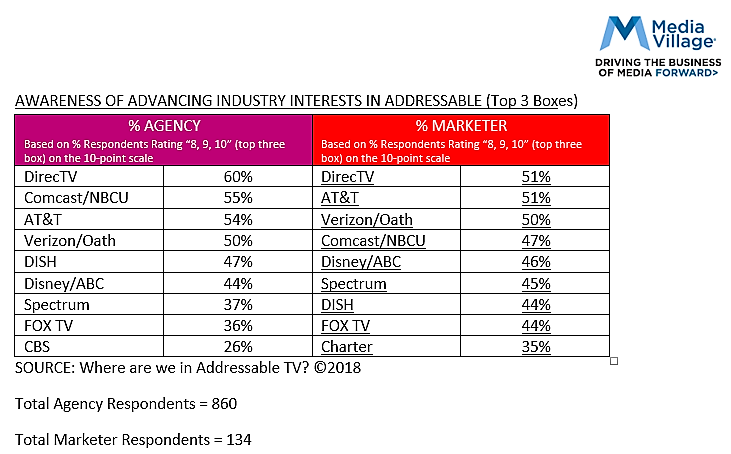 "As audiences shift to OTT platforms and as advanced technologies accelerate the reach potential of addressable media, television will have a new communications and commerce application across the consumer journey," explained Myers.  "It's important to understand how effectively the changing value proposition of television is being understood.  This initial outreach is the first in a series of studies."