Why Isn't It the Year of Gaming? 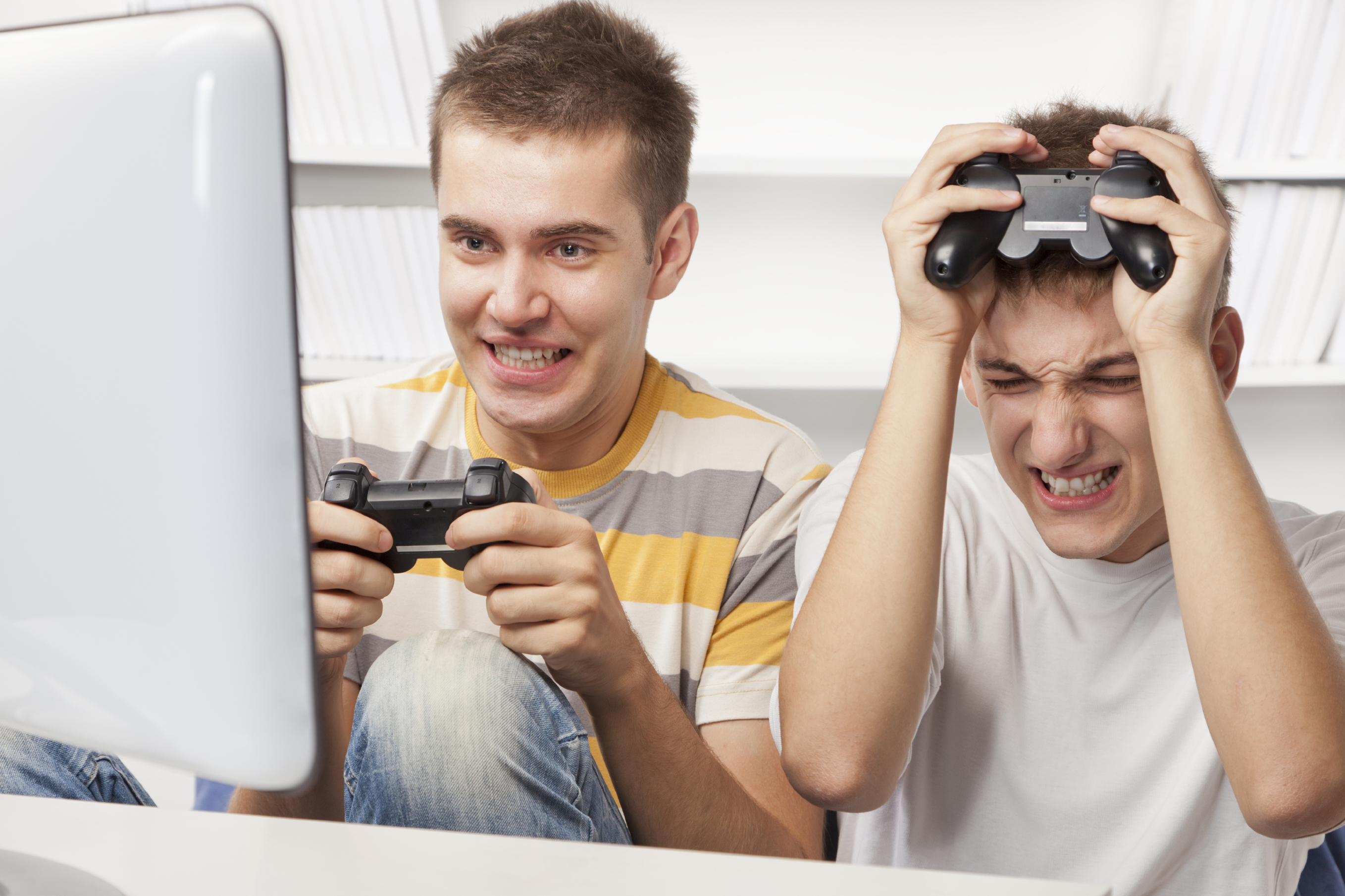 In 2009 Mary Meeker presented her annual update covering economic and Internet trends. The title of the presentation was, "Mobile Internet."

For 10 years we heard it was the "Year of Mobile." In some years, industry titans like Sir Martin Sorrel, the then Global CEO of WPP, would claim it's not the year of mobile yet. The topic became a bit of an industry joke. But not all were laughing. There was serious revenue to be had.

The definition of the "Year of Mobile" was when mobile advertising revenue started to be "on par" in terms of budget allocated for Internet media and time spent by users on Internet media.

I am a big fan of Mary Meeker as she has focused the industry on the innovation and growth topics that drive the development of the digital economy.

Recently, Nicole Ortiz from AdWeek posted an article, "Infographic: consumers want to see more brands in the esports realm not enough ad spend is being funnelled into the category" showing the disparity between time spent versus marketing dollars being spent. The graph is shown here: 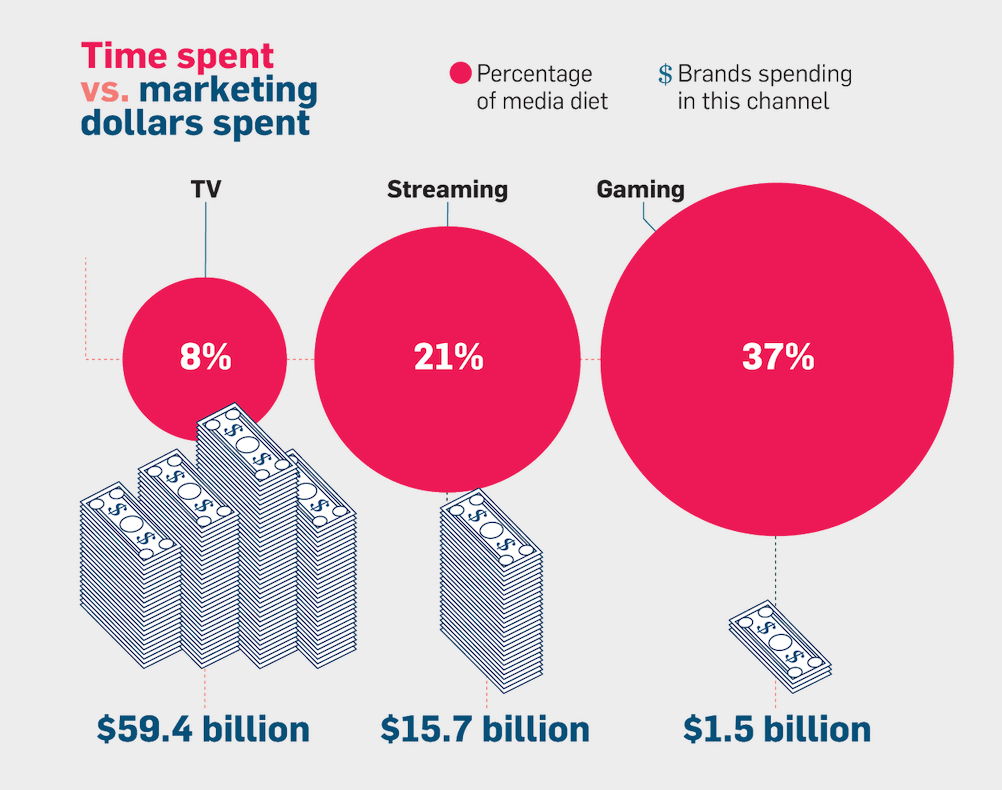 This is a great analysis and starting point to understand the gap and opportunity between time spent in the gaming channel and the other highly invested media channels of TV and Streaming.

eSports is the most hyped media opportunity in the gaming space, a popular topic in the press and with advertisers because it's easily understood. It has well-produced content, highlighting professional career opportunities for an individual, similar to sports.

Some might want to compare the total eSports marketplace in our analysis but that would be the wrong approach. The $1.1 Million forecast from NewZoo includes sponsorships, media rights, publisher fees, merchandise, tickets, digital and streaming. Only a small percentage of revenue goes to the game developer and can be associated with the advertising market comparables. In 2019 NewZoo forecasted the eSports ad revenue to be $189.2 Million.

Here's why it's limited. The existing in-game advertising marketplace is defined by placements like rewarded videos, interstitials and playables. These video game media placements do drive revenue opportunities for game developers, especially in the free-to-play category.

The current in-game opportunities, ads around the game environment like rewarded videos, interstitials and playables, are under-indexed relative to the time spent playing video games.

On average, video gamers spend six hours, 20 minutes each week playing games according to Limelight Networks. Although gamers are very open to advertising according to a recent NewZoo study, while gamers are spending time playing video games, they do not appreciate the game being paused or disrupted with advertising content.

For advertisers and game developers the big opportunity is to connect with the gamers while they are playing the game by leveraging intrinsic in-game advertising.

Intrinsic in-game advertising are ads that are placed in strategic locations within the video game itself. One example of an ad space is a single-sided virtual billboard with advertisements easily and intrinsically placed within game environments without interfering with performance or experience. It is similar to ads on the internet or mobile web, but it's in the game.

Currently the global display advertising revenue is $179.4 billion, which is a bit more than half of the overall global online media spend for 2020. 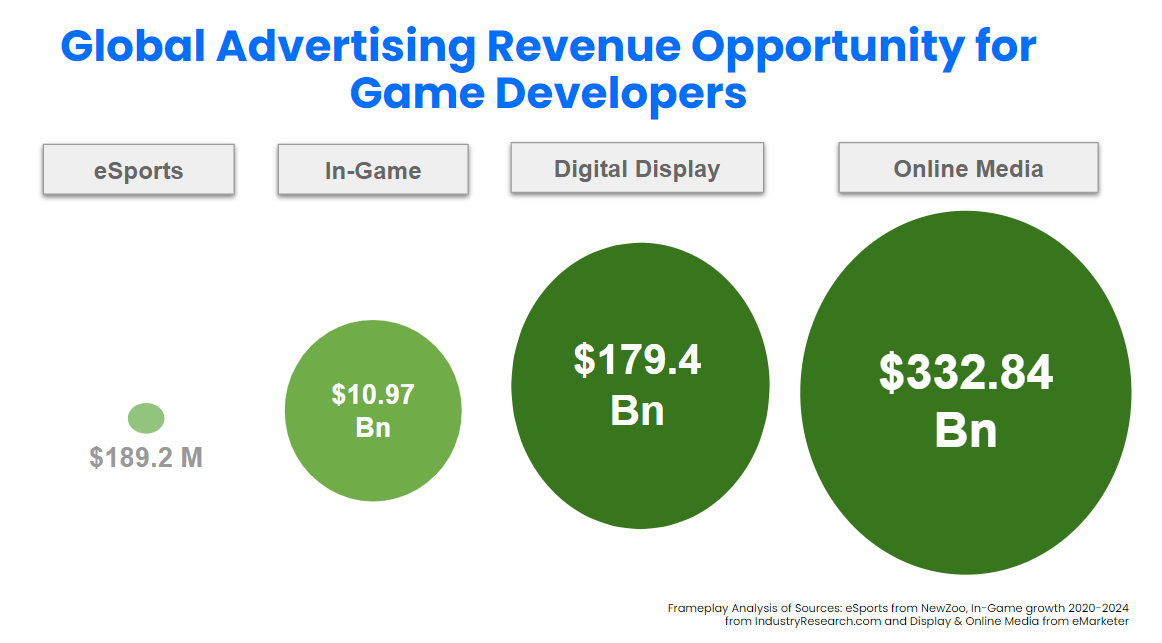 The new capabilities afforded to place ads inside of the game itself opens up a brand-new revenue stream. The global advertising revenue opportunity for game developers is significant and it's only going up. The Myers Report reinforced this trajectory with the forecast that the video game advertising industry will grow at an annual rate of 6.0% to $3.0 billion in 2025.

Advertisers will have the opportunity to reach consumers in a meaningful, contextual way during those six hours and twenty minutes each week people are playing video games. And, just so it's clear the gaming audiences across all age groups is massive. In the US alone according to the ESA, "More than 214 million people in the United States today play video games one hour or more per week. 75% of all U.S. households have at least one person who plays. In sum, 64% of U.S. adults and 70% of those under 18 regularly play video games."

In 2017 Mary Meeker said, "Global Interactive Gaming=Mainstream / Evolving Rapidly /Still Early Days…" In 2018, Mary didn't highlight gaming. In 2019 Mary Meeker wrote, "Interactive Gaming…Increasingly Relevant Way to Communicate" with a bit of a nod to time spent watching gaming. Why isn't it the year of gaming? What's it going to take for the advertising industry to join the game?