Will Robert Buckley Become Known as the Paul Newman of Hallmark?

By Steve Gidlow February 20, 2020 Behind the Scenes in Hollywood Archives 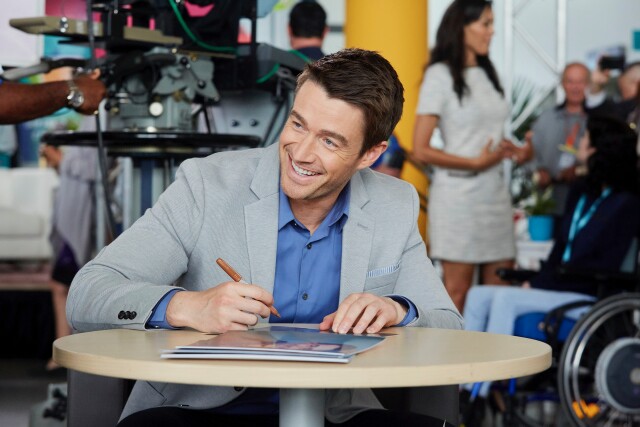 We often like to compare the talented actors of Hallmark Channel to those of the Hollywood system of yore, where the leads were commonly re-teamed from project to project.  So, with the addition this weekend of actor Robert Buckley, the network may have just added its own Paul Newman to its ever-growing roster of leading men.  Buckley stars in Love in Store opposite Alexandra Breckenridge and the always stellar Jackée Harry, and after spending the better part of the last four years battling zombies (not to mention becoming one) as Major Lilywhite on The CW’s iZombie, the less frantic pace was refreshing.  “I loved that change,” Buckley said during an exclusive interview with MediaVillage.  “I had such a great time doing iZombie, but with Major’s storyline the stakes were incredibly high all of the time.  To come in and be able to do a film where I was a guy simply responsible for his feelings, and not worrying about a race war or WW3 and every scene was all ‘My gosh, everything’s on the brink,’ was wonderful.  This time it was, ‘Let’s go ride a tandem bike!’  I welcomed that change so much, along with a healthy dose of bronzer instead of eight hours of zombie makeup.”

Seems Buckley’s Hallmark debut has been a long time coming.  Yes, he’s been a little busy over the past few years, so when the perfect opportunity arose, he pounced.  “Better late than never, right?” he laughed when asked why it took so long.  “I like to think that Hallmark was playing hard to get, and I’m glad they waited.  I was wondering why they weren’t asking, so when this project came around, I was like, ‘Absolutely!  Well played, Hallmark!’

“I guess it came down to timing,” he continued.  “While I was shooting this film two Hallmark executives came to visit the set, and at some point during the conversation they said, ‘It’s great that we finally got you on a movie because we’ve been trying for a while.’  I was like, ‘Wait!  This is the first time I’ve been approached about doing a Hallmark movie.  What do you mean?’  They were like, ‘Well, you’ve always been tied up.’  At that moment I wondered what my agents were doing.  I mean, I love Hallmark movies, and I love Christmas movies, so I always thought there was a natural synergy to work with Hallmark.  I’m a little surprised it took over a decade to happen.” 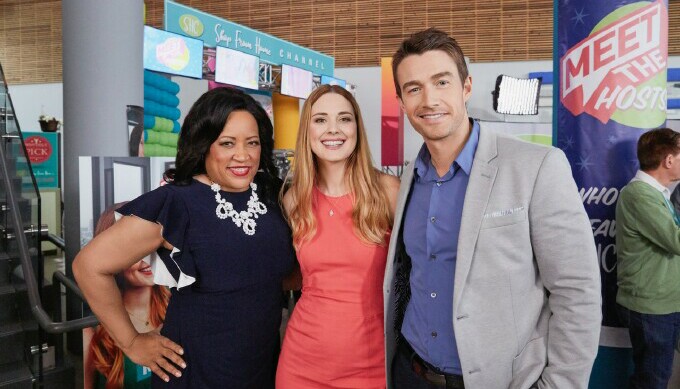 Buckley’s Love in Store character, David Crabtree, is a popular segment host at SHC (a home shopping network) and not at all the typical Hallmark leading man.  He’s a little chauvinistic and somewhat cocky.  When he’s paired with another dynamic on-air presenter, Terrie Carpenter (Breckenridge, pictured above center with Harry, left, and Buckley), who is up for the same huge promotion he is, on-air sparks fly.

It’s Buckley’s adeptness at effortlessly weaving cheeky with charm that makes David even remotely likable.  “Hey, even the jerks in Hallmark movies aren’t reprehensible jerks,” he laughed of the character.  “David isn’t too bad of a guy, and I liked the fact he wasn’t immediately charming and lovable because that gives you somewhere to go with the character.

“If you’re going to tell a love story, and see someone fall in love, change generally does happen within that person,” he continued.  “That’s something we see in this film.  I loved it because for the majority of my career I’ve played nice guys, while in this one I get to play someone maybe a little abrasive, and that was something I had fun with.  It felt like a fun opportunity to play a little bit of an arrogant, sarcastic wise guy, which is something I enjoyed and can relate to, but [David] also has a big heart.

“I liked that there’s more to him that he allows people to see,” he added.  “I also liked the fact that he worked at a home shopping network.  It’s one of those things I grew up knowing was a huge business but had no idea what the behind the scenes looked like.  Going behind the curtain intrigued me.  If I’m at home sick I can easily burn a couple of hours watching those [shopping] shows.”

When it came to our comparison to a young Paul Newman, Buckley laughed, taking it in stride.  “That’s very flattering,” he said.  “I’ll take it, and I am going to tell my wife, and she will never hear the end of it.”  He also understood the meaning behind it.  “There is a little bit of the old Hollywood feel to the way Hallmark does things,” he said.  “They have a great stable of actors, so it’s like the old studio system.  You see the same thing happen with directors like Wes Anderson, who uses a lot of the same actors, and it makes sense.  If you find good people who work hard that you get along with, why not continue working with them?

“I sure hope there’s a lot more Hallmark in my future,” he shared in closing.  “I had a blast working with them.  I’m excited for the fans of Hallmark to see the movie and I’m ready to embrace and welcome whatever they want to give me.  I enjoy Hallmark films, so I’m pretty sure we're all going to be like-minded watching this movie.”

Love in Storewill be telecast Saturday, February 22 at 9 p.m. on Hallmark Channel.