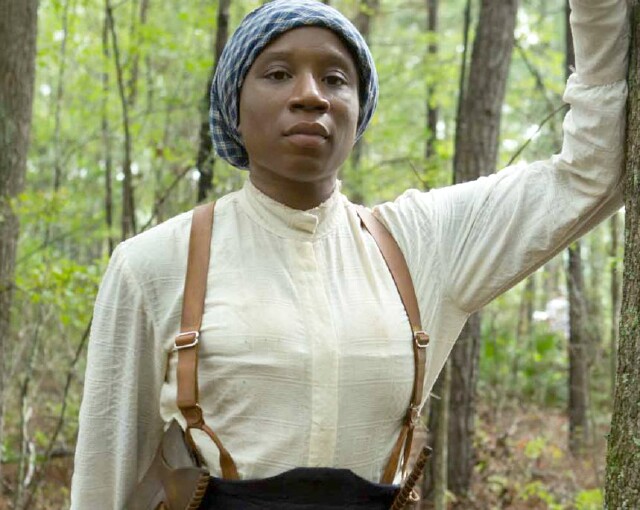 Given what WGN’s Undergroundhas attempted and accomplished, words like “ambitious” just don’t seem sufficient anymore. They’ve raised the bar just that much more by doing something that I’ve personally never seen done. During the sixth episode of the second season, titled Minty and scheduled to be telecast Wednesday night at 8 p.m. ET on WGN, Harriet Tubman (played by the supremely talented Aisha Hinds, pictured at top) gives a speech to a crowd of mostly white abolitionists -- for the entire episode.

When I initially heard about this episode, “ambitious” was definitely not the first word to come to mind. Don’t get me wrong, I have plenty of faith in the Underground family, but I simply could not fathom sitting through an entire episode where the only thing that happened was this speech. Sitting through speeches in real life can be tedious, and it’s not normally something that most people would volunteer for, let alone watch from their sofas. Fortunately, my concerns were alleviated about two minutes into the speech. This is more profound work from series creators, writers and executive producers Misha Green and Joe Pokaski and director and executive producer Anthony Hemingway.

Harriet Tubman was a remarkable person to say the least, and she did things that were infinitely influential while leading a life that was unimaginably oppressive and painful. It goes without saying that it takes a special kind of person to see the things she saw, get treated the way she was treated and still be able to do the selfless things that she did in the face of constant danger. That being said, it takes a special kind of actor to bring a legend of this magnitude to life on screen. Aisha Hinds is definitely that actor.

The first time I remember seeing Hinds was in a minor role on True Blood. More recently, she’s been playing Pastor Janae James on Fox’s new crime drama Shots Fired. One look at her resume and you’ll see a body of work loaded with notable titles. She’s always been a strong actor, but this particular endeavor has proven that she’s more than just solid -- she’s a force to be reckoned with. During this episode, Hinds captivates while conveying both authority and vulnerability. She tells the stories of her childhood with a magnetic presence that allows viewers to go on these emotionally charged journeys with her.

Other elements are also at play in an effort to keep the episode as engaging as possible. For instance, the cameras are constantly panning and switching at regular intervals. Combined with the lighting and the almost complete absence of an underscore it really paints a vivid picture of the room and the somber mood that permeates it. Certain sounds are even set at slightly higher volume to punctuate the more emotional moments. And let’s not forget the fact that the anecdotes given life by Hinds’ performance are truly enthralling themselves.

Personally, I found Harriet’s speech to be extremely humanizing. I think that when we’re taught about people like her and the things they’ve done, they can seem very far removed from the ways in which we live our lives today. The showrunners at Undergroundare well versed in bridging that gap, drawing many parallels between the people of that time period and ourselves.  Tubman’s speech is a perfectly executed example of that. Prior to this episode I had never thought of Harriet Tubman as a little girl unfairly born into this oppressive world, or even really as a woman who had the same needs, dreams and desires as any other flesh and blood woman. Coming to that realization added weight to her words and gravity to her plight.

A lot has happened in this season, and while I enjoy the increase in pace we’ve seen so far, I can appreciate the brake-pump that is this speech. We learn more about Harriet as a human being and hear about the experiences that forged her into the person in front of us. Above all else this speech has a point, and considering they gave the conductor of the Underground Railroad the floor for the night I don’t think it’s farfetched to assume that what she says will affect and possibly set the tone for the remainder of the season. What I know for sure is that sitting through this speech wasn’t the chore I’d imagined it’d be. It was an edifying experience that truly exceeded my expectations, and now I know better than ever to doubt WGN and the Undergroundtruth.