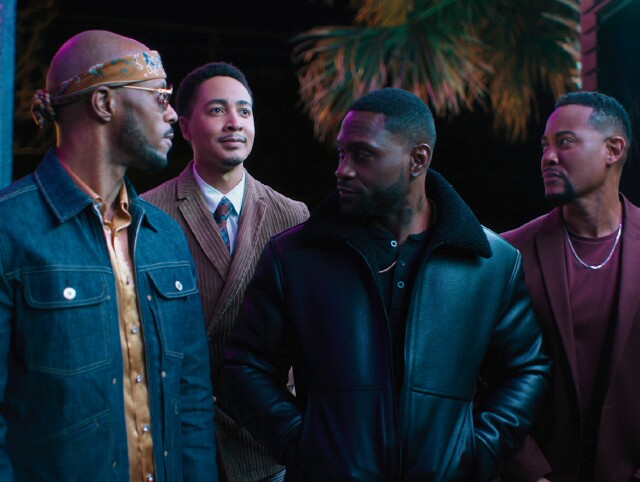 From creator and writer Deji LaRay, and executive produced by LaRay, Cedric the Entertainer and Reesha L. Archibald, among others, comes Johnson, the first Black show in a while that actually exceeded the notoriously high standard I set for shows from creators of color. I’ve written pieces that were basically along the lines of, “Here’s what this show did wrong, and here’s what they should have done,” especially when said show is on a network that focuses on content for the Black community. Johnson, and Bounce TV, a subsidiary of E.W. Scripps Company, fit that bill, but that’s where the similarities end, as far as my previous critiques go. Johnson is fresh, relatable, current and authentic, while also maintaining a distinctive sense of humor. I’m almost afraid to ask, but … could this be the show I’ve been looking for?

Johnson stars D.L. Hughley, Derrex Brady, Thomas Q. Jones, Philip Smithey and Deji LaRay, as Eugene, Jarvis, Omar, Keith, and Greg, respectively. All their last names are Johnson, though most of them are not related. Jarvis, Omar, Greg, and Keith are friends since childhood, and Eugene is Omar’s uncle and locally famous Atlanta radio personality. Honestly, this show is particularly adept at weaving culturally relevant conversation into the fabric what’s basically a modern-day buddy sitcom. Think UPN’s Girlfriends, but if it had Insecure’s production values and starred guys instead. I assume they decided against going with Boyfriends as the title and went for the vaguely euphemistic Johnson instead, but I digress.

Jarvis is a successful real estate company owner whose arc seems to be that he married a white woman, something that some members of the Black community still take issue with. Keith is an up and coming professional photographer who’s also a hopeless romantic. Greg (who, I remind you, is played but the writer and creator of this series) is ironically the most broke of them all, which I’ve surmised from the apparent fact that he derives his income solely from being a rideshare driver and Airbnb-ing his house. Omar, who legitimately looks like he used to play in the NFL, actually comes from the tech world and is in a custody battle with his wife, from whom he’s separated. This is a solid mix of origins and walks of life, and it really creates a sturdy foundation for an appropriately grown and sexy level of messiness.

To top it all off, these guys can act. Brady, Jones, LaRay and Smither all very much pull their weight in the performance department, and it does wonders for the show. I believe Jones as Omar, just as I believe Brady as Jarvis. There’s a scene halfway through the first season where Jarvis gets in a verbal altercation with one of the guys, and the looks of betrayal and anger he conveys essentially make the scene. Smithey, who’s character Keith is responsible for a legitimate amount of the comic relief in the series, was also a pleasure to watch, even when Keith was being his usual sucker-for-love self. This group of guys is an entertaining one to watch, period.

All my favorite things -- the camera work, the soundtrack, the lighting -- worked together like instruments in a symphony. The writing is lighthearted and jovial, yet conversation-starting in a self-aware and conscious way. It sounds silly to have to say, but the Black people sound like Black people, as in, people who also just happen to be Black. Much like actually being Black, it is an ever-present part of our collective experience, but not it’s defining trait. Johnson treats Blackness the same way. It’s refreshing that it doesn’t cash in on the stereotypes of old.

Remember those self-aware and conscious conversation-starters that I mentioned before? Well, they’re all over the place. In the very first episode there’s a short conversation the guys have about white people using the N-word. A couple of episodes later the guys have a squabble over the efficacy of voting, and after that there’s a talk had about Omar's situation with his wife that covers the stigmas men of color face in regards to expressing themselves emotionally in the context of mental health and self care. The best part was how these conversations were just that: conversations. There didn’t seem to be a specific agenda being pushed during any of these back-and-forth exchanges. Just valid points, and food for thought, for the most part.

Look, I am genuinely relieved that this show exists at all. I’ve been looking forward to the day that someone other than Justin Simien, Issa Rae, Donald Glover or Kenya Barris would bring us something worthy of mainstream attention, and today is that day. Admittedly, the short list I’ve just mentioned isn’t all that there is, but in terms of the lane that this particular series finds itself in, those are the big dogs.

I’m thinking LaRay just earned himself a spot at that table. Seriously, ‘cause I need that second season, fam.

New episodes of Johnson premiere Sundays at 8 p.m. on Bounce.