Without a Host to Call Its Own, CBS’ “Late Late Show” is Must-See TV – Ed Martin 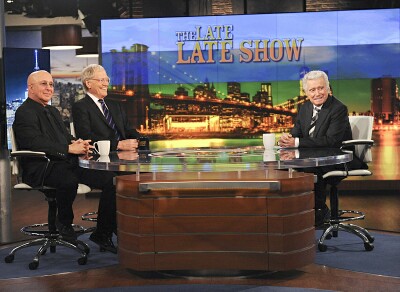 For all the fuss last year about the current round of musical chairs among CBS’ late night talk shows – Ferguson is gone, Letterman is leaving, Corden is on deck, Colbert is coming – surprisingly little attention is being paid to something the network is doing right now … keeping “The Late Late Show” alive during the approximately three month gap between Craig Ferguson’s departure and James Corden’s arrival (on March 23) with special guest hosts typically sitting in for two or three days each.

This week has featured a two-night stint by Regis Philbin, a man with more experience hosting talk shows than most, and another (concluding tonight) by actress and comedienne Whitney Cummings. (How long has it been since we have seen a woman behind the desk of any late night broadcast talk show, except for that one edition of NBC’s “The Tonight Show Starring Jimmy Fallon” in which he insisted that guest Barbra Streisand, in her first appearance on “Tonight” in a half-century, do the honors? She did, but Fallon, perched on the chair next to the desk, still conducted the interview.)

Actor Adam Pally sits in on Friday. Next week, actor Sean Hayes is scheduled to take over the show Monday-Wednesday, with musician John Mayer filling out the week on Thursday and Friday. (I have no idea how well he will conduct himself as an interviewer, but having a musical superstar of Mayer’s stature on board for two nights leading up to the network’s telecast of the Grammy Awards on Feb. 8 seems like a shrewd move.)

Drew Carey started it all the week of January 5, which was more than appropriate, since he is a long-established CBS personality (he has been the host of “The Price is Right” since 2007) and Ferguson was part of the supporting cast of Carey’s long-running ABC sitcom. (In the final moments of Ferguson’s final night on “Late Late” – and in tribute to the legendary final episode of “Newhart,” the best series finale of any television series ever – Ferguson and Carey awoke in bed together as their characters from Carey’s sitcom, with Ferguson shaken up by a long dream about being a late-night talk show host.)

Others personalities have also stepped in of late on “Late Late,” including the ladies of CBS’ entertaining afternoon talk show “The Talk” (pictured below). Give CBS credit for knowing how to maximize its talent and aggressively maintain that family feeling. (Now let’s get a star of “The Young and the Restless” or “The Bold and the Beautiful” into that chair. How about Eileen Davidson? She has plenty of free time.)

I realize this “Late Late” free-for-all is just a strategy calculated to fill a hole between hosts, but at the very least it represents the most dramatic experimentation any broadcast network has done with its precious late night talk show real estate in longer than I can remember. I suspect that no talk show, especially one in late night, could survive long term without at least one permanent personality at its center, but there is something to be said for keeping things fresh, perhaps with a rotating roster of hosts who may or may not include one or more women, people of color or LGBT personalities along with the standard issue middle-aged straight white male so cherished by late night executives.

Anyway, it was an older straight white male -- two of them, actually -- who brought “Late Late” to my attention earlier this week, on Tuesday to be specific: Regis Philbin and David Letterman (pictured at top). Philbin was concluding his two-night gig and Letterman (an executive producer of “Late Late”) was his first guest that night (accompanied by his long-time bandleader Paul Schaeffer). Watching Letterman be interviewed (rather than doing the interviewing) is always interesting, but what really grabbed me about the show was that it was taped in New York City (in the somewhat cold and cavernous “CBS This Morning” studio, with guests seated around that giant clear table with the CBS eye in the middle) rather than the usual “Late Late” studio in Los Angeles.

At first I was impressed by the fact that Philbin and Letterman (and Schaeffer) were engaged in an actual adult conversation that spanned two full segments. The grown-up conversation continued with Philbin’s other guests, including Donald Trump (who mused for the umpteenth time about considering a run for the presidency) and Charlie Rose (who was right at home at that table, for obvious reasons). Admittedly the hour skewed a bit old, at least until the band Counting Crows showed up to end it on a musical note.

But as I watched I started to wonder: Why hasn’t a network tried a bi-coastal late-night talk show? What better way to mix things up and keep viewers interested than by moving back and forth between New York City and Los Angeles? Wouldn’t that represent a bold attempt at something new by a broadcast network at a time when all broadcasters continue to fight the assertion that everything about the “broadcast model” is old and outdated?

I think that’s a very good idea – almost as good as the one Philbin suggested to Letterman. Once Dave is finished with his “Late Show” duties, Reege said, he ought to shift from five-night-a-week status to a once-weekly program, “Sunday Night with David Letterman.”

“It’s perfect for you!” Philbin declared.