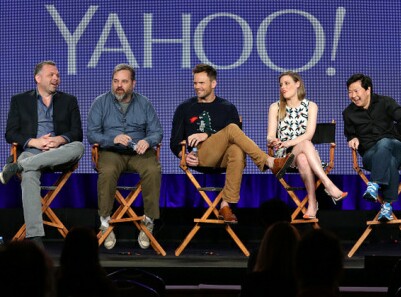 Pasadena, CA – Tuesday was one of those rare nights off at a TCA tour – a night off being defined as one that gives critics and reporters extra time to write columns and screen programs. It also means we are on our own for dinner.

In the interest of brevity and cost effectiveness, a small group of journalists (including me) decided to head off to the local In-N-Out Burger. We took advantage of the free shuttle service here at the Langham Huntington Hotel, home of the Winter 2015 Television Critics Association tour.

Something interesting happened during the ride to In-N-Out. Our driver -- a young, articulate, well-spoken and very polite twenty-something man -- asked about our day. We had been in Manhattan Beach that afternoon on the sets of CBS' new hit adventure series "Scorpion" (one of the younger skewing hours on CBS) and The CW's "Jane the Virgin," arguably the most talked about television series in the media this week because series star Gina Rodriguez was honored Sunday with a Golden Globe Award. (The photo below, by the way, is the first-ever TCA selfie. It was taken by "Jane" co-star Justin Baldoni while we were all on the set.) 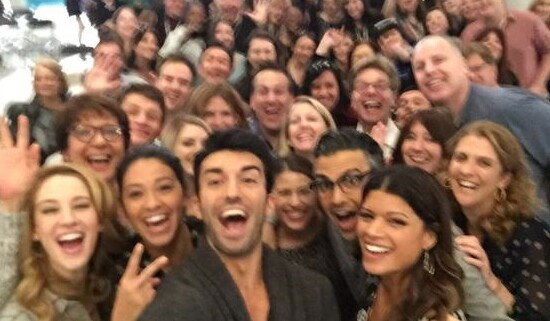 When we mentioned "Scorpion" and "Jane" to our young driver his response was, "Are those shows?" He had never heard of either one. As our conversation continued, it became clear that he didn't watch anything on broadcast or cable television except for AMC's "The Walking Dead." Apparently he was also somehow immune to the ever-present marketing for television series that surrounds people, especially in Los Angeles. He explained that he pretty much only watches movies and shows on Netflix; most recently "House of Cards" and "Breaking Bad." (There is so much talk at this tour about "Breaking Bad" whenever streaming or bingeing comes up that I am convinced it has done more for Netflix and other such services than any other show to date.)

And so it was that the critics in the shuttle van – average age 40 – were once again made to feel prehistoric because of their appreciation of the broadcast and cable experience. Our driver very politely explained that television networks aren't really relevant to him or to his friends. He made a point of saying that he refuses to watch anything that has commercials in it.

The driver's remarks felt especially timely coming at the end of a day that began with the announcement by Amazon that it would be producing Woody Allen's first-ever television series (an idea that at least one critic finds problematic) and, at TCA, included morning sessions with Yahoo and Crackle. Also, TCA is still buzzing about the Netflix panels that kicked off this tour early last week and about the big wins by Amazon (for "Transparent" and its star Jeffrey Tambor) and Netflix (for "House of Cards" star Kevin Spacey) Sunday at the Golden Globes.

The panel Yahoo presented was for the comedy "Community," which it picked up after it had been cancelled by NBC last spring. As happened last week at the Netflix panel for the Tina Fey comedy "Unbreakable Kimmy Schmidt," which was developed and then passed on by NBC only to become a streaming series, the cast and producers of "Community" talked with great excitement about the creative freedom they had at their new home.

Interestingly, Yahoo will debut two episodes of the show on March 17 and then one episode a week after that, defying the full-season drop-and-binge approach that has come to identify the streaming model. "Community" creator and executive producer Dan Harmon is cool with that. "The way that the show is marketed, released, distributed, whatever, that's the privilege of the people that pay the money for the show," he said. "I worry about the content, and I don't consider it in my jurisdiction to tell them what to do. [At] Yahoo, it should be said, they're always asking me, 'What do you think?' They want me to be happy, and we just sort of defer back and forth. I just go, 'That sounds great. Whatever you guys want to do, you bought the show.'"

Harmon asserted that in terms of physically producing "Community" little has changed, even though the Sony-produced series will now be distributed on Yahoo rather than NBC. One critic wanted to know if there will be profanity or nudity on the show when it is seen on Yahoo.

"I think there's stuff we can do that we couldn't have done on TV," Harmon said. "It would be very easy to completely corrupt the tone of the show, even with a single sort of thing that hit your system as something that can't exist on network TV. I definitely don't want to make the mistake of making the show unrecognizable. However, there's a natural kind of loosening of the corset."

One thing Harmon won't miss in the transition to streaming is the constant worry about Nielsen ratings. That freedom, he said, "is gonna be the coolest thing in the world. Those numbers felt bad to me.

"The worst part was that in that world a .8 could mean the best day of your life and a .7 meant no donuts!" he continued "It was such an odd, weird religion to live under. I don't know what will replace it. I can't wait to find out how that's going to work. [Is Yahoo] going to just go, 'This is how many clicked?' I don't know what they'll do."

Harmon also doesn't know how commercials will be handled … only that "Community" will be advertiser supported on Yahoo. "I don't want to speak out of school here," he cautioned. "I know it's not subscriber based. You will go to the Yahoo app, and you will be watching it, and it will be free. It will be advertising supported. Whether or not that means there will be classic commercial pods placed within the playtime, I'm a little out of my jurisdiction saying that, but I do know that I'm writing it as if there will be, because as a writer, three act stories are what work for me."

In the session for Crackle that followed, Sony Pictures Television Executive Vice President of Digital Networks and General Manager of Crackle Eric Berger reminded TCA members that his streaming service was producing original content several years ago. "Long before other networks announced their streaming plans Crackle had been operating as a television network with a core focus on creating entertainment content, programming it and delivering it on every platform," Berger said. "I'm proud to say that our model is at the forefront of future television, and speaks to how the industry will increasingly address consumer behavior.

"I've always said that our goal is for Crackle to be a playground for talent, producers, writers and directors," he continued. "We're not afraid to take risks and experiment. We're lucky to be in the business with incredibly talented artists and some great franchises. Jerry Seinfeld produces and stars in our flagship unscripted show, 'Comedians in Cars Getting Coffee.' Today we announced our sixth season of that two-time Emmy nominated series."

The reason Crackle came to TCA was to promote its original movie "Joe Dirt 2: Beautiful Loser," which Berger described as "the first-ever made-for-digital sequel to a major motion picture." (That may or may not be true: Netflix's sequel to the 2000 theatrical film "Crouching Tiger, Hidden Dragon" is coming in August 2015, when it will be simultaneously available on Netflix and in IMAX theaters. "Joe Dirt 2" is scheduled to premiere sometime during the summer on Crackle.)

"Joe Dirt 2" is currently in production, with David Spade reprising the title role from the 2001 movie, which still plays in heavy rotation on cable channels. Spade credited fan enthusiasm as expressed on Twitter and Instagram for stoking interest in a second movie. "Something about the first one, whatever it was, resonated, at least with fans of mine. So when it comes up this much, we had to take it seriously, because I felt like that was a demand, in a way, from my fans. We're not saying it's a demand for the whole world. But we like it and the people that like it really like it. I was really glad to do it."