Yet Another Daytime Drama Rocks Disney/ABC 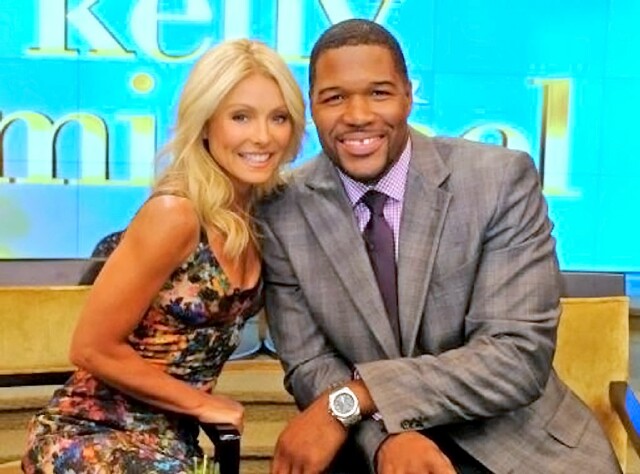 What is it with ABC’s handling of its daytime schedule? Looking back over the last ten years the words “staggering ineptitude” come to mind, but never more than in recent days with the dust-up involving Kelly Ripa, arguably ABC’s most popular daytime star and a veteran of its daytime programming since she joined the network’s soap opera “All My Children” in 1990. For the record, she was also a part of ABC’s primetime lineup from 2003-2006 as executive producer and co-star of the sitcom “Hope & Faith” (which was, in its own way, a promotional vehicle of sorts for ABC with its proclivity toward featuring actors and personalities from the network’s daytime and primetime shows in guest roles, some of them recurring).

(Editor's Note: For another take on this situation, check out the latest Stuart Elliott Report.)

The media frenzy surrounding Disney’s and ABC’s shabby treatment of Ripa in the matter of her “Live with Kelly and Michael” co-star Michael Strahan’s impending move from that show over to a full-time position at “Good Morning America” has been so intense it eclipsed the other huge television story of the moment, the return of HBO’s “Game of Thrones.” (The cover pictured below from the always-dependable New York Post says it all.) 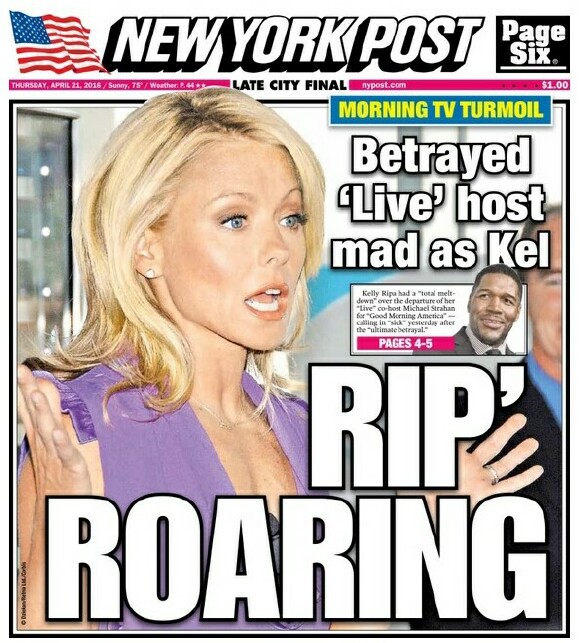 It ain’t over yet. Strahan will be gone in three weeks. What happens then? Among the rumors that are creating a media firestorm of their own: Disney/ABC would like to cancel “Live” and expand its weakening “GMA” into a four-hour daily program so that it might be more competitive with NBC’s resurgent “Today” show, which runs daily from 7-11 a.m. ET. (That’s only a rumor, folks. But it’s a hot one.)

On Tuesday’s edition of “Live” a somewhat nervous but unquestionably formidable Ripa took the stage after returning from a “break” of four days (three of them a planned long-weekend wedding anniversary trip with her husband and sometime guest co-host Mark Consuelos). She thanked her fans for their very vocal support during this time and then subtly and with great dignity stuck it to Disney/ABC.

“Our parent company has assured me that ‘Live’ is a priority,” she told viewers. (Funny the way the parent company has handled a “priority," isn’t it?) The “priority,” of course, will be finding a new co-host for Ripa. (I’d like to nominate Consuelos if he’s interested and available. Kelly and Mark worked together on “All My Children,” where they met, and I think they are equally great when they team on this show.)

Ripa also said that one good thing to come out of this mess is that it “started a larger conversation about communication and respect in the workplace.” (My take-away from those carefully chosen words is that Disney/ABC is currently the poster child for corporations that do not effectively communicate with their employees and don’t show them the respect they deserve. In other words, “ouch”!)

This isn’t the first time that executives at Disney/ABC have treated one of the leading ladies of ABC’s daytime lineup with such callous disregard. Remember when they all sat back and let hugely popular “All My Children” star Susan Lucci go on a national book tour to promote her biography and, ever the team player, her long-running show -- without telling her that they were planning to cancel it? Or how about the time they turned an argument between Rosie O’Donnell and Elisabeth Hasselbeck, then co-hosts of “The View,” into a split-screen catfight without making the women aware of what was happening?

Of larger concern, I see the Ripa ruckus as the latest in a recent rich tradition of bungles by Disney/ABC involving ABC’s entire daytime lineup, which for much of the ‘80s and ‘90s and even during the first few years of this millennium was a sterling example of television at its very best. It won awards. It commanded young demographics the other networks could only dream about. It created stars that went on to movies and primetime series.

And then it all inexplicably went to hell in a manner that can only be described as awe-inspiring.

It wasn’t that long ago that ABC’s daytime schedule was rich with powerful live news and entertainment programming and compelling daytime drama – all topped off in the markets that matter most by an hour of the syndicated “Oprah Winfrey Show.” The audience, the media coverage and the awards were all there for most of ABC’s daytime offerings, year after year, making everybody happy. CBS may have had the largest daytime audience during that time, but it also had the oldest demographics, and it didn’t enjoy the buzz, the attention or the outsize advertiser support that ABC was receiving.

And now? ABC’s daytime schedule is, in the simplest and most polite terms, perpetually problematic. It has been for several years now, and as the tumult at “Live” has proven, the situation just keeps getting worse. Strahan will likely be a huge asset to “GMA,” because he offers the big personality and effortless charm that seem to be required for an on-camera position on that program. Interviewing skills are plainly of less importance. The exception to that general criticism is the extraordinary Robin Roberts, who should have a daytime talk show of her own, or – here’s a thought – should be teamed with Ripa! Talk about a dynamic duo.

It’s hard to believe this is the very same daytime schedule that once offered viewers and advertisers two hours of smart news, talk and entertainment on “GMA” with co-hosts Charlie Gibson and Diane Sawyer leading the way; a consistently engaging hour of storytelling and interviews on “Live” with Regis Philbin and his co-hosts Kathie Lee Gifford (currently killing it with Hoda Kotb on the fourth hour of “Today”) and, later, the now-rattled Ripa; a dazzling hour of daily entertainment from Rosie O’Donnell; smart and sophisticated talk (during its early seasons) on “The View” and then, after a half-hour break for local news, three-and-a-half hours of compelling daytime drama consisting variously of “Loving”/”The City”/”Port Charles” at the start, followed by the unbeatable and much-missed triple play of “All My Children,” “One Life to Live” and “General Hospital.” It was all topped off by “Oprah,” as noted above. (Yes, I realize that “Live,” “The Rosie O’Donnell Show” and “Oprah” are/were syndicated fare, but Disney/ABC is responsible for “Live” and ABC was always associated with the latter two.)

All of that is gone now, replaced (in the New York City market, at least) by the largely dumb-downed “GMA,” the compromised “Live,” “The Rachael Ray Show” (which isn’t bad as long as food is your thing), the remains of “The View” (now a cold mess rather than a hot one, and utterly unbearable), the not-ready-for-The-Food-Network cooking show “The Chew,” an hour of syndicated emptiness and ABC’s sole-surviving soap opera, “General Hospital,” which isn’t nearly as grand as it used to be, though it has significantly improved in recent years under the oversight of talented executive producer Frank Valentini and head writers Ron Carlivati (now off the show), Shelly Altman and Jean Passanante.

It seems all the daytime excitement is happening these days over at CBS (with provocative soaps “The Young and the Restless” and “The Bold and the Beautiful” and chat sensation “The Talk”) and NBC (with those four hours of “Today,” the increasingly daring “Days of Our Lives” and the syndicated “Ellen DeGeneres Show”).

This was ABC’s game to lose. It did, and it continues to do so. When will it end?