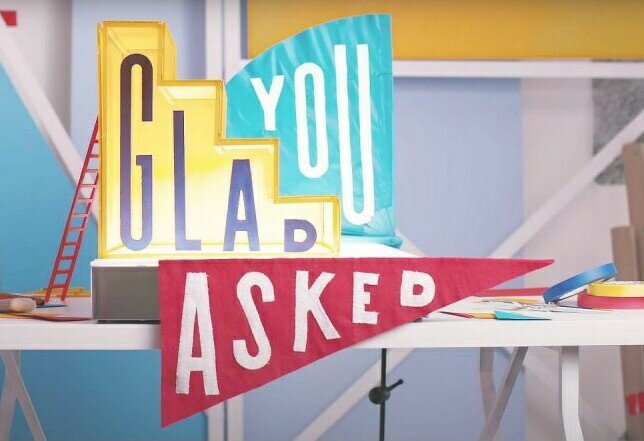 I'm going to be honest here: The more I learn, the more upset I get. Angry, even. I've always felt there was some credence to the idea that the smarter an individual was, the less happy they'd tend to be, kind of like the other side of that whole "ignorance is bliss" coin. The thing is, I used to use intelligence as the metric by which I'd measure how "smart" someone was but, in reality it's not intelligence, it's education. Anyone, regardless of their level of intelligence, can be educated, and that education is … well, it's freedom.

This brings us to Glad You Asked, an educational YouTube Original series developed in partnership with Vox. Originally created with the intention of using scientific methodology to answer the internet's frequently asked questions -- think things like "Should we be worried about GMOs?" and "How does the internet work?" -- Glad You Askedis now using its very recently released second season to answer questions that have a lot more to do with race, and let me tell you, I know I've just been further educated, because now I'm really pissed.

Glad You Askedis hosted by a multicultural group of Millennials who spend every show answering the hell out of whatever titular question each respective episode poses. Delivery-wise, the producers hit the metaphorical nail on the head by hiring hosts that are young, relatable and good-looking to deliver the facts and data behind these questions and their answers. Production-wise, the show was equally as clever to go with a visual style that feels very tactile and hand-crafted, especially with things like graphs and title cards. This not only helps to simplify the more complicated data for its viewers, but also adds to the show's overall style, which gives a colorful, new age spin to the kind of stuff we used to see as kids on PBS.

More important than all that, however, is the subject matter of each of this new season's episodes. Over the past year, it's become obvious that, to some extent or another, the big word on everyone's mind is race. More specifically, terms like racial bias and systemic racism have been getting their fair share of the limelight, and everyone needs to be educated about the former if we as a people have any real shot at dismantling the latter. That's where Glad You Asked comes in.

The first episode, titled How Racist Am I?, opens on host Cleo Abrams explaining the intent of the episode which, in this case, is to figure out how one measures one's own biases. Why is this important? Because it is apparently the basis of racism as a whole.

According to Dr. Nilanjana Dasgupta, Professor of Social Psychology at the University of Massachusetts, "Racism is structural bias. Racism is residential segregation. Racism is policies that oftentimes intentionally try to create and then justify inequality." Dr. Dasgupta said this in response to a question asked by Cleo's co-host and Vox's lead reporter on race, Fabiola Cineas, during a segment in which the three of them discussed the "cultural thumbprint" of biases on both the film and television industries. "Implicit bias, if you built it out from the individual mind to that environment, to the institution, to the society, the end result is racism," Dasgupta explained.

The following episode, Are We Automating Racism?, takes it a step further with host Joss Fong, who opens up her episode with a way to test Twitter's picture-cropping algorithm, which purportedly seemed to prefer white faces over those of people with darker skin. The subjects of her first test were her co-hosts, Lee Adams and Christophe Haubursin, who are dark and light skinned, respectively. Of course, the Twitter algorithm failed the first two times, beginning an overall conversation that doesn't really demonize any particular group, but does help one determine where the fault may lie.

"Part of it is a deep attachment and commitment to this idea of tech neutrality," said Ruha Benjamin, the author of Race After Technology,to Joss during a discussion on this topic. Benjamin described how people are attracted to this idea that technology can be unbiased and pure, so to speak, especially in a world so "drenched in the muck of all of human subjectivity," as she put it. "It's a systemic issue in the truest sense of the word."

Enlightening as it all was, I didn't feel that anger I mentioned up top well up inside of me until GYA's third episode, Does My Neighborhood Determine My Future? According to the episode's host, Lee Adams, it very much does.

During the New Deal, the federal government instituted housing programs and policies to save the severely distressed housing market. One of the first of such policies was the creation of the Home Owners Loan Corporation or H.O.L.C. This company sent real estate appraisers to towns all over the country in order to create maps to be sent to the nation's banks. These maps were then used by said banks to determine how risky offering their services to areas in each town or city may be. Sure, it sounds legit, at least until you read the corresponding reports that came with the maps and see shit like, "The area is well laid out and the improvements are attractive, but the proximity of Negro families on Spruce Street at the southern edge precludes the district from a better rating and is retarding its development."

The sad truth is that the origins of the bigotry and oppression that systematic racism allows and enables goes far enough back in our country's history that unless people educate themselves (through watching programs like GYA, for example) it is damn near impossible to see the metaphorical strings that are controlling this little puppet show called "your life." That's honestly what gets me the most -- how blatant it all is, and how blind a lot of us have been.

It's not unlike that quote that superstar Pharrell Williams once said at the start of a song: "The truth shall set you free, but first it'll piss you off."