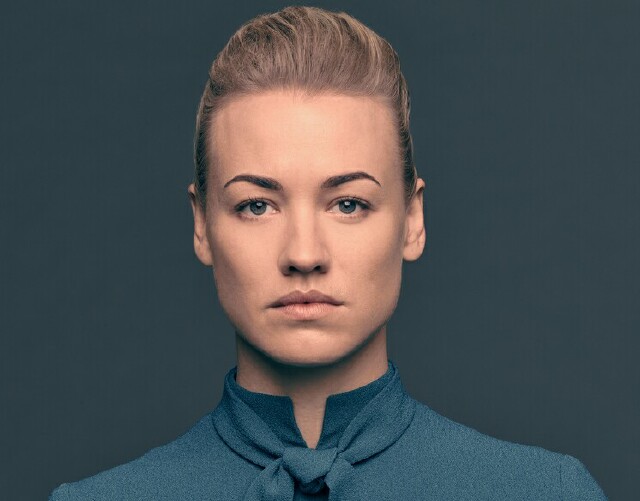 It’s been quite the year for Yvonne Strahovski.  In addition to the accolades she received for her riveting performance in season two of Hulu's accalimed drama series The Handmaid's Tale, which have included Emmy Award and Critics' Choice Award nominations, she became a new mom just a couple of months ago.  The happiness she is experiencing has made transitioning into the dark dystopian world of Gilead even more challenging than usual.  “I've actually come in quite late to the game this season, just now joining my Handmaid’s family,” she explained.  “They have been hard at work for several weeks while I was off giving birth to my son, so that is at the forefront of my mind.

“I’ve just come off day four of shooting,” she continued.  “So, I'm really in the thick of it all and that's been the biggest thing for me, the juggling act of going dark and in between scenes being so happy to see my son, breastfeed him and just hang out with him.  It's very much a Jekyll and Hyde situation and I do feel I'm having a personality crisis in my life.  I'm sure I'll get into more of a groove, but I really hit the ground running while juggling motherhood, long shooting days and the crazy scenes.  We'll see what happens.”

Thankfully for the actress, season two revealed a softer side to Serena Joy Waterford, something Strahovski appreciated after making no secret of what side of the fence she is on when it comes to the heinous behavior that circumstances have forced upon her character.  “It was really lovely to explore Serena's vulnerability and I was happy about that,” she said.  “I think I'm naturally drawn to finding the good in someone, so it was a strange place to be, trying to find the good in someone so evil.

“Ironically I saw her as someone very vulnerable when first reading the script,” she added.  “I hadn't read the novel and there was a lot of information in the pilot about her, so I pieced things together from the script.  I remember thinking she's obviously in a relationship where she doesn't trust her husband and that would be a miserable existence.  The impending arrival of the handmaid and that whole scenario would leave someone pretty vulnerable no matter how evil a person they are.  That was a key element for me in Serena from day one, so I did enjoy diving right into that and finding a deep open wound in her.”

When it comes to the often brutally realistic scenes she plays opposite Elisabeth Moss, Strahovski admits the level of comfort she shares with her co-star helps.  “I love the scenes with Serena and Offred,” she shared.  “They're juicy and kind of my favorite scenes to play.  They are something I've always looked forward to doing and I know at the end of the day, they're just fun to play … kind of like having a big tennis match.”

Behind the scenes, Strahovski’s Handmaid’s Tale experience has been almost as complex as Serena’s tumultuous journey.  Pregnant while filming the second season, Strahovski managed something of an internal juggling act between her real-life experience and playing a woman desperate for a child, even if not hers.  “In season two I [tried] separating my pregnancy and that experience from playing Serena and what I had to do in my profession,” she revealed.  “I was so concerned that playing Serena, the nature of her and the nature of her scenes, would affect me negatively during the pregnancy.  I really didn't want that to happen at all, so I kept envisioning a safety bubble around my belly and nothing was going to touch it and everything in there was safe and not susceptible to Serena or anything I was doing for my work.

“Interestingly, [as we film] season three, I think the fact I've become a new mother is quite inspiring and I think it will continue to be, especially as I now know what it's like to have a child and all those clichés that every parent talks about,” she continued.  “It's the best thing in your life; you do fall in love, and it's the ultimate feeling of love.  It’s something I'm experiencing now and find it really inspiring and formative in a lot of ways.  I think it will help me in my journey this year.”

Viewers will have to wait until 2019 to see where that journey is headed.  But when it comes to The Handmaid’s Tale and its uncanny mirroring of present-day events (especially as related to women’s rights), the upcoming season is right on track.  “I do love that this season is more focused on women banding together,” Strahovski reflected.  “I'm looking forward to seeing what's happening in real life as the show is streamed, as we seem to be like a weird crystal ball for real life in the way things have previously aligned.  So who knows?  If it's anything like what we've historically done, it could be pretty interesting.”

Seasons One and Two of The Handmaid’s Tale are currently streaming on Hulu.