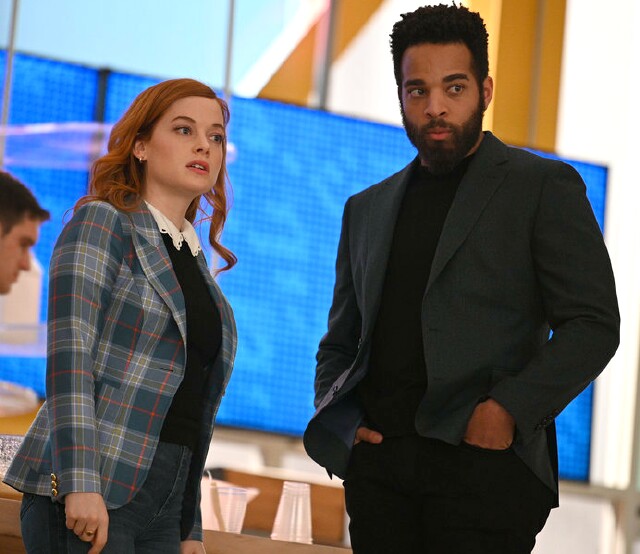 I said in my last piece on this show that watching NBC's Zoey's Extraordinary Playlist unfold as a series would be a "colorful, hilarious, emotionally grounded experience," and you know what? I was right. Starring current Golden Globe Award nominee Jane Levy (above left), Zoey's -- a dramedy about a young woman who can read people's emotional minds in musical number form only -- ended up being so damn good it was green lit for a second season. It earned that renewal by gracefully walking the fine line that exists between impressively doing something that could be lame and beating said thing to death by overdoing it. This week, through the same storytelling mechanism the series uses to bring us deeper into these rich characters, Zoey's used its powers for good to bring us a powerful message about racial bias.

The episode, titled Zoey's Extraordinary Reckoning, is lowkey kind of a two-parter. I'll explain. In the previous episode, titled Zoey's Extraordinary Trip, Zoey's boss Danny Michael Davis (Noah Weisberg) comes back into power as CEO of SPRQ Point and tells marketing executive/Zoey's friend Simon (John Clarence Stewart, pictured at top right) that he must hold a press conference in order to spin the fact that the company's facial recognition software has serious issues when it comes to recognizing people of color -- like not being able to see them at all. Simon spends the rest of the episode feeling some type of way about all this, until he finally decides to speak his truth to power at the previously mentioned press conference. That's exactly where that episode ends.

The meat and potatoes of Reckoning, the episode that follows, is the aftermath of Simon's remarks, and of (arguably) more importance, how people choose to react them. To be clear, Simon called out SPRQ Point for not being as inclusive and diverse at high levels as it should be, and for how that configuration created a work environment that encouraged racial bias in both the staff and the A.I. they were creating.

I'm not gonna lie. I did not see what the big deal was at first. I mean, Simon was already a hotshot marketing exec prior to this episode, so handling public relations and what not is literally his job. It's not like Davis hired him specifically to deal with this one issue. Also, they're a tech company and, well, tech shit breaks. In my mind it's entirely possible for any company to create a product (especially a software-based product) and for it to fail in some way that hadn't been foreseen. That right there is the whole point, however, and that's what the show was trying to tell me.

The fact is that SPRQ Point is/was filled to its metaphorical brim with instances of racial bias that went far beyond technological oversights, and the choice Danny Michael Davis made to have Simon be the (too coincidental to not be intentionally black) face of the apology squad was, at best, wildly insensitive.

Then, things got worse.

After feeling pressure from SPRQ Point's almost completely Caucasian board of directors, Danny Michael Davis asked Simon (via Zoey) to publicly retract his entire statement and recategorize it as a singular experience. We saw something similar happen during the season finale of Hulu's Woke when Lamorne Morris' character Keef was asked by the police to semi-publicly forgive the officer who used excessive force on him in the show's first episode. The police on that show, not unlike the board in Zoey's, were trying to use the blackness of the wronged party to undercut the severity of the original offense. SPRQ Point wasn't asking Simon to just do his job, they were asking him to lie about his day-to-day existence as a black man at that company. 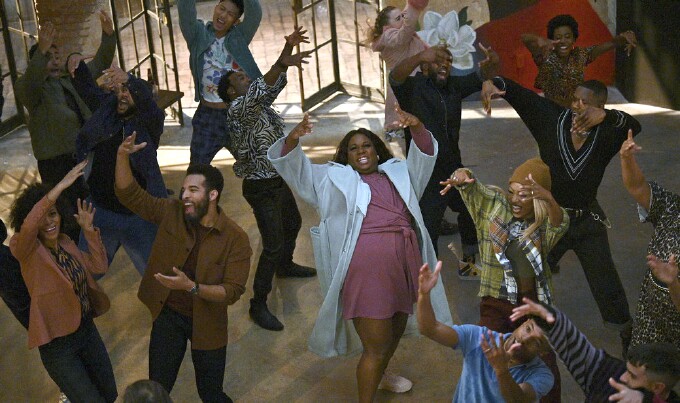 I also originally recoiled at how hard all the people of color in the show were on Zoey about the whole thing -- specifically Mo (Critics Choice Award nominee Alex Newell, pictured at center in photo above) and Simon. Sure, in the episode prior Simon did make the attempt to talk to Zoey about what happened but, unaware of how that day would unfold, Zoey had already dropped what I'm pretty sure was acid, so she wasn't really paying attention. Mo also got pretty salty with Zoey over her asking him how she should talk to Simon. In response, Mo said, "So you're gonna ask your Black friend how to talk to your other Black friend?" Then Mo sang "No More Drama" by Mary J. Blige and told her to go figure it out.

Before I sound crazy, allow me to explain. Everyone (who was Black) was right to react the way that they did, but because of Levy's likability as Zoey I was quick to mentally defend her good intentions. The truth is, she was right to be embarrassed that she had been so blind to the experiences of those close to her. She tried to see it was because she didn't see color when she saw Simon, but like Simon said, "Simon is a Black man." Seeing him as "just Simon" denies a huge, fundamental portion of who he is.

At a time when many shows are striving to handle the discussion of race, biases and microaggressions in the workplace, the Zoey's team has found a fresh way to do so that is quite unlike the rest. NBC long ago coined the phrase Must-See TV. That certainly applies here.

Zoey's Extraordinary Playlist is telecast Tuesdays at 8 p.m. on NBC.