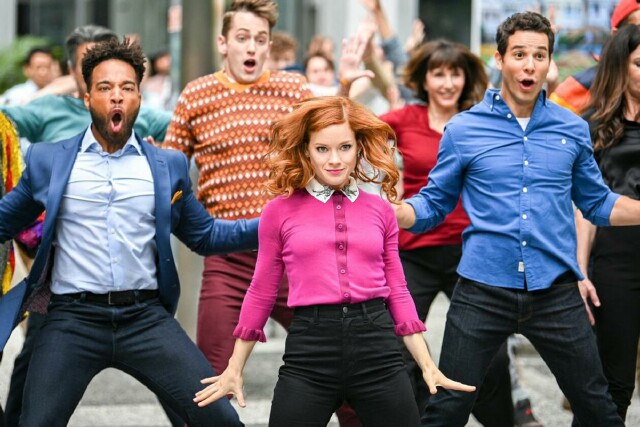 Even though I happen to be a huge fan of musical theater, something about people singing and dancing in my TV shows usually turns me off.  So, when Zoey’s Extraordinary Playlist came along, I had an intense feeling of “Yeah, me watching this isn’t gonna last long.”  (Kind of like I felt about Glee.)  Then, much like in the show, something miraculous happened, and I began to see/hear the truth of this series and what it has to offer.  Now, Zoey’s Extraordinary Playlist is one that I’d definitely like to hear the rest of.  Let’s talk about why.

This comedy with song and dancefollows a young woman named, you guessed it, Zoey (Jane Levy, pictured at top in pink), who lives on the West Coast and works as a coder at a tech-based company (one that has what appears to be the coolest office space ever created).  Her mother Maggie (Mary Steenburgen) lives at home with Zoey’s father Mitch (Peter Gallagher), who suffers from a degenerative condition that affects at the very least his motor skills, and possibly even cognitive function.  Zoey expresses some concern about the possibility of ending up like her father, who was fine just six months prior, so she goes to get an MRI.  While that’s happening, the technician plays a playlist from one (or possibly all) of the major audio streaming services, and wouldn’t you know it?  A small earthquake occurs.  That’s where the magic happens.  Literally.

Zoey is shaken up, both literally and figuratively, after the quake ends.  In that ‘80s-movie “I was holding a thing while getting hit by lightning and now I have powers” sort of way, she can also now hear people’s thoughts -- in musical form only.  As I mentioned above, at first that sounded to me like a special kind of hell.  I mean, a forever-musical?  Lin-Manuel Miranda would probably shudder at the thought.  (Oh, who am I kidding?  He’d probably love that.)

That said, after the big post-MRI number, all the musical stuff is relegated to specific plot-related points.  Unlike your classic run-of-the-mill musical where everything from deep thoughts to the day’s events are sung, Zoey’s only puts on a show when one is called for by the scene we are watching.  It almost makes me look forward to those musical moments, because I know that whether they are funny or dramatic or emotional -– or some combination of the three -– they will always advance the plot and carry the narrative forward in some way.  This show took something I typically steer away from and made it appealing to me because it is also functional.  It also helps that the characters are so damn likable.

Mary Steenburgen has been a favorite of mine for a long time, mainly because of her affinity for both comedy and drama.  I’ve never seen her in something I didn’t like her in.  Peter Gallagher (Schmidt’s dad on New Girl) does a lot of straight-faced staring off into the distance due to the nature of his character’s ailment, but there are moments when he gets to shine, as well.  (For more on that, see the show.)  Alex Newell, who plays Zoey’s neighbor Mo, can sing her ass off, to put it plainly, and her character is bubbly and hilarious to boot.  For as little as she and Zoey supposedly know each other, it’s funny how much clarity she gives to Zoey’s life and what is/may be happening to her.  Again, that added functionality makes her character not only likable, but also necessary.

The rest of the cast -- which also includes Skylar Astin, Lauren Graham, John Clarence Stewart and Kapil Talwalkar, among others -- does an amazing job of making this surprisingly grounded world of surprise serenades from strangers seem like something much better than the nightmare I had envisioned.  Nobody in the cast is more responsible for this, however, than our eponymous lead, Jane Levy.  She embodies a character that’s grounded and approachable, and who has an experience that is, if nothing else, bizarre as hell, and handles it the way most levelheaded people her age would.  Like Steenburgen, Levy has that funny/dramatic duality to her talent, and it shows.

In accordance with its pattern of surprising me, the first episode of Zoey’s (which, in a weird move, debuted way back on January 7 and has been available for streaming ever since) stays true to form throughout, right to the end.  Spoilers ahead for those who are behind -- Zoey has a moment with her father that I anticipated but assumed wouldn’t happen until the end of the show’s first season.  She sits next to him, alone and sobbing, vocally wishing he could give her some reassurance about life like he used to before his illness.  And then, he does -- in song form.

It’s a moment that is heartwarming and emotional, and it also raises a lot of questions.  What happens if Zoey loses her powers now?  Will her father’s condition worsen if he loses his only subconscious outlet?  Can she do this with anyone else who has his illness?  If it turns out that she doesn’t have some sort of superpower, is she making this all up?  The corner the writers quickly paint Zoey (and themselves) into is a pretty damn interesting one.

So, they got me.  I’m on board.  I gotta know; is Zoey going insane, or is she now the proud owner of musical theatre-based superpowers?  Either way, finding out is going to be a colorful, hilarious, emotionally grounded experience that combines elements of some mighty fine sitcoms and dramas with story-based performances of the kind found in one of America’s favorite entertainment past times.   I’ll be right there, singing along.

Zoey's Extraordinary Playlist will be telecast Sundays at 9 p.m. on NBC beginning February 16.  The pilot will be repeated that evening at 8 p.m.