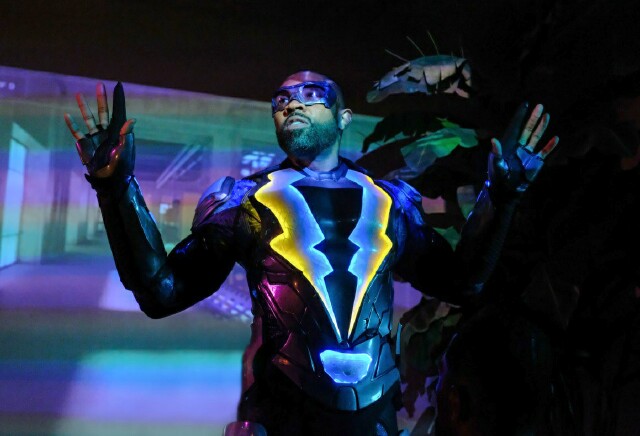 Black Lightning, based on the classic DC Comics character of the same name, is The CW’s latest addition to its burgeoning superhero drama roster.  It’s also the first CW show of its kind with an almost entirely black cast.  I was super skeptical at first, seeing as this isn’t exactly the territory The CW is known for, but after watching the show I can honestly say my hesitation wasn’t justified.   As it turns out Black Lightning is, in a word, electrifying.

The original Black Lightning character was the first African American D.C. character to get his own self-titled comic series, and first appeared in Black Lightning No. 1 in April, 1977.  Over 40 years later, this iconic title has been brought to television by director/producer/writer Salim Akil, whose resumé very much speaks to his experience working on successful “black” shows (Being Mary Jane, The Game, Girlfriends, etc.).

The comic book backstory and the one from the show vary slightly from one another but are still fairly simple.  In the comic, Jefferson Pierce was born with the ability to generate and manipulate electricity.  Additionally, he was an Olympic-level athlete and expert martial artist so, after the death of his father at the hands of The 100, a dangerous and powerful local gang (not to be confused with the CW show of the same name), Jeff left his hometown, having opted instead to become a gold-medal winning decathlete.  Some other things happened, then tragedy struck and he returned to his hometown where he tried to better his community not with his powers but as the principal of his former high school.  Although his less physical methods do have a huge positive impact they prove to not be enough, and eventually he is reeled back into a life of one-on-one crime fighting. 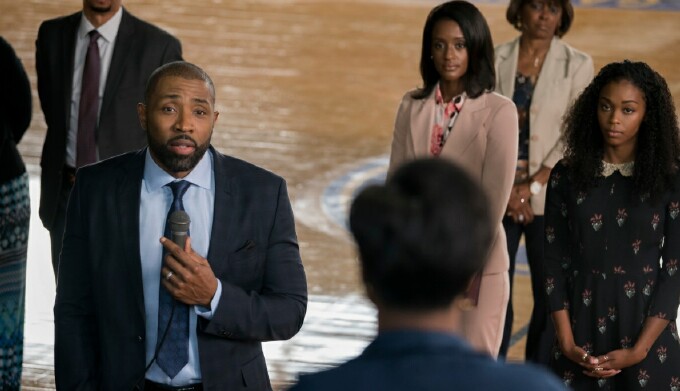 In the TV show, Jefferson Pierce -- who we get a killer portrayal of by Cress Williams (mostly known for The CW’s Hart of Dixieand 1998’s Never Been Kissed) -- does all the same stuff, just a little differently.  I don’t envy the man, either.  He’s got it rough.  This time BL sustained near lethal injuries, which inadvertently exposed just how life-threatening his night job was to his eventual ex-wife, Lynn (Christine Adams).  In an attempt to repair the damage to his family, Jeff promised to never again use his powers to fight crime, a promise he ended up having to break after nine years, which is pretty much where the show picks up.

Although Lynn, the ex-wife, she seems pretty adamant about not wanting Jeff to bring Black Lightning back, she still loves him and seems to be constantly fighting the “stand by your man” part of her personality.  She and Jeff disagree, but she never gets ratchet, or even cusses, and almost always comes off as levelheaded and supportive.  I dig that about her.  Kudos to Adams for bringing that to life.

On TV, the catalyst for Jeff’s return to the vigilante life was a combination of his love-driven need to protect his girls, the system he adhered to continually failing to work, and the race-related mistreatment he suffers at the hands of his town’s local police officers while the town suffers at the hands of The 100.  I love the idea that Black Lightning being fed up with injustice is what puts him over the edge; especially since, as a black man, injustice is something he’s more than familiar with.

On to the cool stuff …

Thankfully, Black Lightning’s superhero outfit is hotter than the ad spots initially made it look.  In the commercials I came away with the impression that the suit was kind of bulky and a little hokey.  However, it’s appearance and functionality in the actual show is much more solid.  Cress Williams (pictured at top and above left) has got the TV superhero body type down, so there isn’t as much padding as I initially thought, and BL’s suit comes with a built-in voice changer, which alleviated some of my concerns about how people didn’t recognize their principal running around whupping ass at night with that tiny mask on.

Also, the action scenes are more legit than I thought they’d be.  In fact, the tone of the entire show is grittier, darker, and more realistic than I originally expected.  The music is as soulful as the musical references by the students are current (though I’m not particularly fond of the theme song), there’s the threat of actual death (which is a welcome addition to any narrative if you ask me), and then there’s that whole “You were sitting next to this guy at a party, so now you have to become a sex worker to pay off his debt” situation that happens to one of Jeff’s daughters during the pilot.  Talk about immediately setting the mood, right?  Trust me, it doesn’t let up, either.

This reincarnation of a legendary black D.C. Comics character has a rich and colorful narrative to pull from, and apparently it’s already been poking its head out in some places.  Comic book arch villain Tobias Whale (Marvin “Krondon” Jones III) already seems to be a major player on the TV show, and Peter Gambi (James Remar), an older Italian gentleman who’s basically Black Lightning’s Alfred, plays a huge role as well.

In the show as in the comics Jeff has two daughters: Anissa (played here by Nefessa Williams) and Jennifer (China Anne McClain).  In the comics both of them gain superpowers of their own, causing Anissa to take on the name “Thunder” and Jennifer the name “Lightning.”  Since the pilot episode of the show, Anissa has gone from accidentally breaking her bathroom sink during a “panic attack” to almost crippling her first three bad guys, so I’m thinking the writers aren’t going to waste any time getting at least the first two legs of this (probable) tripod on its feet.

Black Lightning is a more than solid superhero show.  Even if the superhero aspects of the show were removed, it would still be a gritty drama built on excellent performances and thoughtful writing.  This series represents a positive fictional character of color, and that character brought into modern times and combined with the collective voices of his ex-wife and daughters represents a huge cross section of our country: modern-day black families trying to survive in America.  It shines a mindful light on issues that face inner city school systems and neighborhoods filled with poverty and crime without making any of its main leads drug addicts or criminals.  These people exist outside the stereotypes.

If anyone tells you The CW dropped the ball on this one, they’re lying.

Black Lightning is telecast at 9 p.m. Tuesday on The CW.