Hulu’s “The Act”: Actor-Driven and Stranger than Fiction 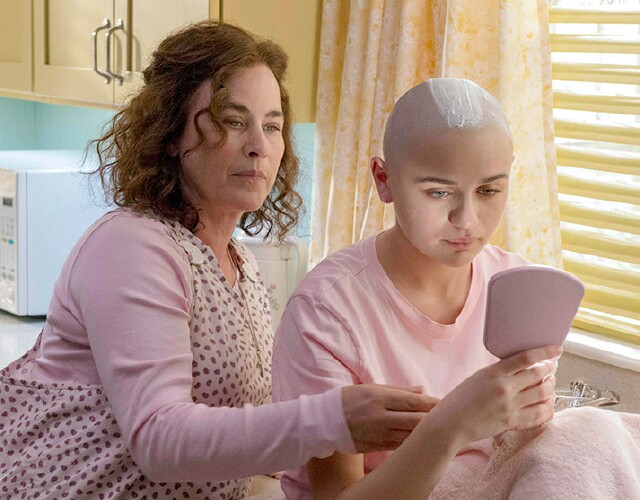 Hulu’s crime drama The Act gives new meaning to the phrase, “You can’t make this stuff up.”  Based on true events, this seasonal anthology follows mother-daughter duo Dee Dee (Patricia Arquette) and Gypsy Rose Blanchard (Joey King) on a journey that’s chock-full of lies, secrets and eventual murder.  Created by writer/producer Nick Antosca and Michelle Dean, this dramatization brings viewers a story that feels too over the top to be real, but definitely is.  The fact that it is so damn good and detailed makes sense, as Michelle Dean is the journalist who produced the definitive documentary about the Blanchards, Mommy Dead and Dearest, which more or less makes her the authority on this topic.

Long story short, Dee Dee Blanchard was a con-woman who convinced everyone she met that her daughter suffered from a myriad of serious conditions (including, but not limited to, ear infections, sleep apnea, chronic seizures and muscular dystrophy).  She had Gypsy’s saliva glands extracted, shaved her head to mimic the look of cancer patients, had her constantly use a wheelchair instead of walking (even though her legs worked just fine) and fed her all her meals through a tube, because realism, I guess.  She even had Gypsy convinced she was at least a couple of years younger than she actually was, all so that they could live off of the charity provided by their neighbors and other well-intentioned benefactors, including organizations like Habitat for Humanity.

Eventually, Gypsy Rose got hip to all this trickery and decided that she’d prefer a life out from underneath her mother’s abusive thumb.  This did not end well for Dee Dee.

As crazy as Gypsy and Dee Dee’s story is, believe it or not, finding out what happens next isn’t the real selling point of the show.  What actually puts this series over the top (in the best way) are the performances by Arquette, King and Chloë Sevigny (who plays the Blanchards’ rightfully suspicious neighbor, Mel).  Arquette delivers a perfectly duplicitous Dee Dee; a woman who convincingly comes off as equal parts sincere and sinister.  Dee Dee attentively waits on Gypsy hand and foot, painting a clear picture of an ailment-ridden daughter and her guardian angel caretaker/mother, but behind the scenes she is controlling and manipulative.

Then there’s King, who, as far I’m concerned, knocks her portrayal of Gypsy Rose clear out of the park.  Her desire to be like the other girls in her neighborhood is damn near palpable, as is her ever-increasing level of disillusionment with the realities of her life.  King’s eyes are absolutely magnetic and her expressive face allows her the ability to convey everything that’s going on below the surface without ever having to say a word.

Sevigny’s character, Mel, feels like the viewer’s entry point into the situation.  Yes, it’s technically her daughter, Lacey (AnnaSophia Robb), that first befriends Gypsy Rose, but it’s Mel who gets the inkling that something’s off with the Blanchards.  Nothing is more telling than that death stare only women seem to know how to give, and no one can cut their eyes at you better than Sevigny.

Later in the series we meet Nick Godejohn, who’s played by the remarkably talented Calum Worthy.  Younger viewers (or their parents) may remember Worthy from Disney Channel’s Austin and Aly, but in this show he’s nothing like the silly ginger goof he used to play.  Godejohn -- the man who Gypsy Rose eventually talks into murdering her mother -- is on the autism spectrum (something that ended up being pivotal in his legal defense).  The level of commitment by both Worthy and King is more than apparent, as evidenced by scenes that I feel are better watched than described (remember, it’s about the journey and all that).  The connection that they shared, the way that Gypsy saw him as her escape, the way that he saw himself as her rescuer, all paint a very genuine and humanizing picture of these two.  It’s very conflicting, because one could only imagine suffering all those years of mental and physical abuse, but at the same time murder is obviously still a big no-no.

The Act was an interesting watch for me because, as with other true crime shows, how the story plays out is already common knowledge.  It almost makes this series spoiler-proof, because how could one ruin something so easily Google-able?  The journey is what kept me coming back episode after episode – and the stellar performances.

I’m looking forward to seeing what real crime ends up being the focus of this new Hulu franchise's second season.  It likely won’t have anything to do with this one, which is fine.  I’m on board for whatever sensational headline The Act decides to dig into next.