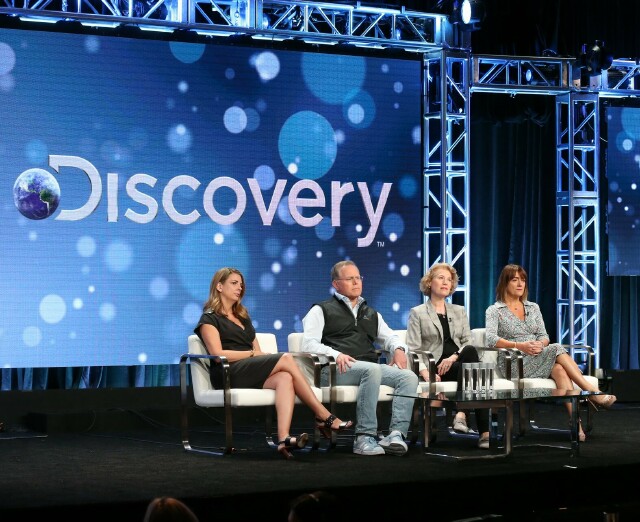 Beverly Hills, CA -- Nancy Daniels, Chief Brand Officer, Discovery & Factual; David Zaslav, President and CEO, Discovery; Kathleen Finch, Chief Lifestyle Branding Officer, and Susanna Dinnage, Global President, Animal Planet, stopped by the Summer 2018 Television Critics Association Tour to explain the structure of the new Discovery and how the 18 newly combined networks of Discovery and (the former) Scripps will work together going forward.  (Daniels, Zaslav, Finch and Dinnage are pictured above, left to right.) Separately, Discovery presented six program panels including one for HGTV and one for Food Network.  This was the first time that any of the (now former) Scripps Networks have appeared at a TCA tour in more than a decade.

Zaslav noted that with the strong female skew of so many of the networks this expanded group is “aggregating 22, 25 percent of the audience of women in America on any particular night.”  Further, the company can readily cross-promote between all the networks.  “With the broad reach that we have now, we have an ability, day and date, to tell people on HGTV and Food and ID that something great is going on over on TLC,” he said.  “We're kind of just growing into our new set of assets, but we're working together really well, and things are going better than we expected.

“Kathleen was running all the Scripps Networks and we added to them for her TLC and ID,” he continued.  “It's the Lifestyle group; but it's a lot of our female networks.  When we look at all our networks that lean toward women, it's quite a collection.  We have four of the top five channels for women in America with ID, HGTV, Food and TLC.  Actually, we have the three top cable networks for women.”

Reminding the room that she is one of the legacy Scripps team members that moved over to Discovery, Finch noted of the four months since the merger, “One of the things that’s been really fun is the way we're able to sort of look across the landscape at the incredible audience that we now command and how can we work together.  On the legacy Scripps side, Food Network leaned in really quickly to have a lot of fun with Nancy's group around Shark Week.  There are so many things that we can do now that we're in the same family and not on opposite ends of the spectrum or competing with one another.  It’s really been exciting and invigorating to get all of our creative people together to think about how big we can make this as one team.”

Asked about how the merger might alter programming development, Daniels replied, “Our mission for Discovery Channel and Science Channel remains the same.  There hasn’t really been a shift in that because of the merger, but what we have seen is that it's been amazing to come together as a bigger company and understand how we do business together, how we interact with the community, and to be introduced to people we haven't been working with before.  That’s exciting and new for us as well.”

One definitive change is that Discovery is moving out of the scripted business.  “We did two big scripted projects, both of which were critically well-received,” Daniels recalled.  “But at the end of the day -- and before I came onto the network -- we decided [to] do what we do best and focus on nonfiction programming.  There's a lot of scripted content out there.  It's hard to break through.  We decided to really focus on what we do best and what we're known for, which is nonfiction.”

Zaslav noted that putting Dinnage in charge of Animal Planet on a global basis is part of the expanded company’s decision to experiment with new business strategies.  “Directionally we think this may be a way that we want to go; but rather than program a cable network in the U.S. and then have teams around the world working with Kathleen and Nancy we have one person programming one channel everywhere in the world.”

“I'm developing content very much with a global consumer in mind,” Dinnage added.  “We have some of the strongest global brands in entertainment.  Animal Planet alone is in 360 million homes.  The North American network remains our foundation and incredibly important to us, but I'm throwing the doors open, alongside Nancy and Kathleen, to the whole world.  We have great digital partners with Group Nine and the world's our oyster.  We've been thinking about the globe, not just about one market.”

Daniels said that she sees the widespread digital presence of the new network group as a big opportunity for the company.  “When I look at our digital presence and our digital platforms, Discovery is a very strong brand,” she explained.  “It's really meaningful on a brand level and I see opportunities for us on digital platforms to build up our connections, whether it be through Discovery GO or through our different social networks.  [A lot of] my focus is going to be on building those up and making those stronger in the years to come.  We can cultivate a whole new, different, younger audience when we're really firing on all cylinders across all platforms.”

“An example of that is Shark Week,” Zaslav noted.  “Nancy and her team have had some great success this week with [it].  We got over 750,000 streams yesterday and the average age of the people that were streaming on Discovery GO was 26 years old.  That’s in one day.  What it used to be was, you'd wake up in the morning and you'd say, ‘What's the Nielsen rating for what we did last night?’  Now it's, ‘What's the Nielsen rating?’ and then we call up our Discovery GO team and say, ‘How many people were on Discovery GO yesterday and how many streams of content were consumed?’  A very young demographic starting to approach a million streams a day of consumption at a very young age is a big positive for us.”

Zaslav was asked if Discovery is now “big enough” or if he thinks the company needs to get even larger to compete in the digital world.

“I wish I knew how all the chips are gonna fall, but we've placed a lot of chips as bets in areas of the field that most of our competitors haven't,” he replied.  “We're feeling quite good about it.  If you look at our industry, the majority of media players are playing in scripted series and scripted movies.  It's very competitive, it's very crowded.  And you get one of the great leaders of our industry, Rupert Murdoch, saying he is gonna sell 21st Century Fox.  At first we were surprised but then we said with the competition of Amazon, Apple and Netflix, the competitive nature of that side of the business has really changed.  The amount of scripted content has changed.  The amount of dollars going against movies has changed.  We really see the media business as being two sides.  One side is scripted series and movies, and we've moved away from that.  We see what we have as everything else.  We have all this great quality content and we own all of it globally, we're a global IP company, and in terms of where are within the media business, we have a lot of scale.  In the U.S. we're the second largest TV company in terms of reach in the U.S.  NBC Universal is No. 1.  We're the No. 2 TV company in the world."

“Eventually we can go direct-to-consumer with some or all of that,” he continued.  “We think an offering of all our content for six, seven, eight dollars would look very different to consumers everywhere in the world that love and know our brands.  As we see the future, for five, six, seven or eight dollars you can get these great global brands with characters and shows and a fantastic library.  People are consuming more of our content, our share is growing, and so we feel good about where we are right now.”

“One of the things that we really do like to do is figure out what [our] brand lens is and then we never veer from it,” Finch said.  “We double-down on something that feels authentic, that feels like it belongs on our brand, and it's really all from a consumer's view back.  So, when we're thinking about the brand, what we're thinking about is what does our viewer want to watch in the home space, in the food space, in the relationship space -- which is what TLC is all about -- or in the investigative space, which is what ID is all about.  We are very, very brand-specific.  We sit in a development room and the question is, ‘Will the viewer like it?’

“If it's across the line a little bit, if it's outside the wheelhouse and if somebody else could do it -- if it's a food show, for instance, that belongs on Bravo -- and Bravo has some great food shows -- we aren't going to do it because Bravo has a way of doing food and Food Network has a way of doing food,” she continued.  “Keeping that lens really tight and really focused is really what we want to do because we super-serve our audience.  We want to make sure that our audience knows that 24/7 we're going to give them the content that they expect.  That's how we keep our audience as big as it is.”

“We're not putting stuff on just for ratings,” Zaslav noted.  “We're trying to really nourish these audiences.  But we're also a very safe environment.  More and more in media, you go out onto the web and who knows what you're going to find or what you're going to be near.  For a mom or a dad to be able to say, ‘I'm going to take the full portfolio that Discovery has in the U.S. or around the world -- and we're in 52 languages, we have on average 12 channels in every country -- and I'm going to make that available to my family [means a lot].  They never have to think twice about what they're watching.  In the current environment where it’s hard to tell who produced what, what it really is, what’s going to come up when you type in what name on the web, this environment that we've created globally at Discovery is one that we think is quite attractive.  It’s safe and it’s fun and we can grow it.”