A Defining Moment: NYI's Betsy Rella on The State of TV Today -- Part 2 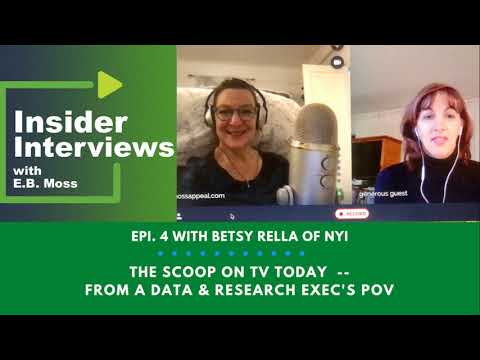 In an informative podcast conversation, Betsy Rella, vice president of data and research for New York Interconnect (NYI), the joint venture of Altice USA, Charter Communications, and Comcast for 7.5 million TV households in the New York DMA, walked E.B. Moss through explanations of everything from "what is TV today" to the importance of impression-based buying. Read the topline of those topics here, or listen to the podcast in its entirety. The following are takeaways on her explanations of holistic media planning, how NYI solves for cross-platform viewing measurement, and the state of news viewing in today's work-from-home environment. The Insider Interviews podcast is available wherever you prefer to listen.

E.B. Moss: How does "Holistic media planning" dovetail with impression-based buying and what's the actual definition?

Betsy Rella: Holistic means pulling everything together. Right now, you get TV in one place, digital in another place. Ideally you would have one platform where everything's feeding into it in terms of your TV piece, your digital piece, your OTT piece, your set top box, video on demand piece. That way you can look at them all separately, but put it all together for an advertiser and have everything ideally flow through from the planning, targeting, reporting, and attribution, all the way down to that backend. At NYI, we're in conversations all the time with vendors out there who are really starting to change the game and have that ability to pull different pieces into the platform. I don't think anyone's 100% there yet, but they've definitely made a lot of progress.

Moss: What are the challenges then? Is it adoption?

Rella: Part of it involves legacy thinking and workflows that have existed for decades, and quite honestly, the systems themselves. It all needs to feed into one platform so you're not operating on a siloed basis.

At NYI we sell all these different platforms, in addition to our Linear+ product. It's a full footprint execution -- different from our addressable offering, which targets only those households in the segment -- and it is data-driven, so it utilizes either first or third-party data. Or, it could be a TV-viewing segment that we create on our own based on the set top box data that we have access to through Altice, for example. Those segments are used to inform the media plan. And at the end of the campaign we provide the Nielsen impression data based on the campaign to the client, as well as the impression delivery based on that targeted segment.

And there's our Audience One product, which pulls it all together, so we are essentially one-stop shopping for linear TV or addressable OTT, set top box video on demand, even live streaming in selling over a hundred basic cable networks across over 70 geographic zones as well as hyperlocal news channels.

Moss: What IS going on with local news versus network news?

Rella: It's exploding. People are flocking to news right now as the situation changes every day. Cuomo Prime Time keeps hitting its highest ratings. We're seeing News 12 and New York One as well as CNN, Fox News, MSNBC all up in double digits.

Moss: So, news is powerful now, but then people want to maybe chill out? What's going on with traditional versus OTT?

Rella: People certainly aren't abandoning regular live TV, but we know that about 130 million adults nationally are streaming nonlinear video to their TV set through an interconnected device or a smart TV. So that's about 56% and it differs by geography; the top streaming markets are in that 60 to 70% range. New York is just below that at about 59%. If you look at Nielsen data, the average time spent on video is about five and a half hours a day, basically flat versus the prior year. But we see an increase in TV connected devices -- growing from 47 minutes a day to nearly an hour a day -- while traditional TV viewing is dropping off a bit. But we're seeing that live plus time shifted TV still accounts for the most time spent in an average day -- about four hours. So, it's still the largest chunk of the day whether it's live or time shifted viewing.

Rella: What we've been seeing is the different tone that advertisers are striking now. I saw a study that cited 22% of consumers say they want brands to share information on how they're supporting their staff and customers during this time. Others are saying they want the ads to provide a sense of continuity and normalcy. Some people are looking for upbeat ads. So, while advertising has been impacted for sure, it's not going away. And based on studies over the past many years, the data shows that even in downtimes, you still want to stay top of mind. You still want to have your message out there and you still want to tell consumers that you're there for them. So, we want to be there to help get their message out.