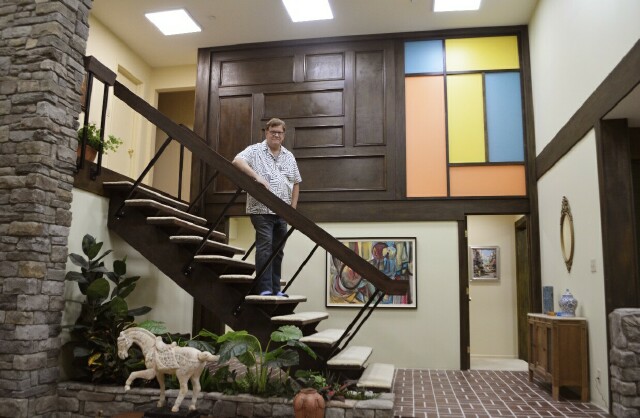 When you’ve built so much of your career around television – or even if you haven’t, but have spent a lifetime watching it – you generally have a visceral response when you meet a favorite performer whose work you have enjoyed for decades, or even when you see a costume or a prop from a long-ago favorite show.  I’ve been fortunate; over the course of my career I have met almost everyone that I used to watch and admire on television, from the late Lucille Ball, Mary Tyler Moore and Larry Hagman to such living legends as Betty White and Carol Burnett, and I have seen more than my share of pop-culture artifacts, often on the sets of shows I used to watch and/or still do.  But none of that prepared me for the rush of feelings that stopped me cold last week when I entered the recently “altered” Brady Bunch house on 11222 Dilling Street in North Hollywood, CA, that has been at the center of HGTV’s recent sensation A Very Brady Renovation.

Standing out front looking at the iconic house, the exterior of which has been seen in homes around the world since 1969 when The Brady Bunch premiered on American television (on ABC on Friday nights, before TGIF was even a thing), was an experience in itself, though my excitement dissipated a bit when I remembered that over five decades thousands of tourists have stood on the sidewalk or in the street and taken pictures.  Reportedly, the most recent owner of the home never did much to alter its exterior, lest legions of Brady fans be disappointed.  Still, in the 30 years that I have been visiting L.A. on the regular, nobody ever said to me, “Let’s go see the Brady Bunch house.”  Odd, considering that it is widely known to be the second most photographed house in America.  (You-know-who currently resides in the first.) 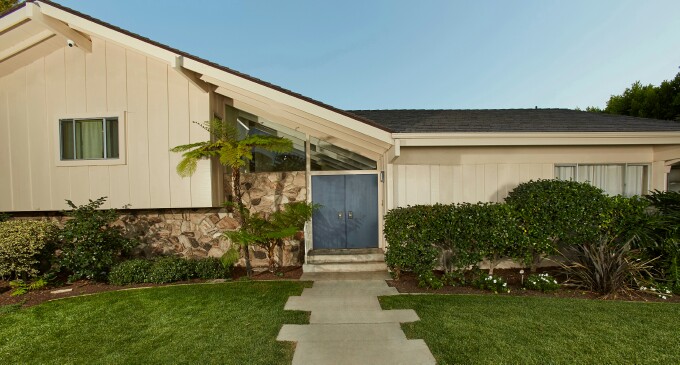 I was joined in the yard by various folks from HGTV and my colleague Steve Gidlow, and then we entered the house.  I could hear people gasp up ahead of me as they filed in, stopping on those familiar brick steps (on the inside of the home) and gazing out over what may be America’s best-known living room, focusing almost immediately on that staircase.  The last time I remember hearing people gasp before I saw what they were looking at, and then gasping out loud when I did, was in Paris at the Sainte-Chappelle, across from Notre Dame, as tourists emerged from a circular staircase into the building’s upper chapel and were awestruck by its historic stained-glass windows.

Okay, this wasn’t that.  But it was impactful in its own way.  We spent almost an hour in the house, with only a few other people, making it easy to maneuver about, take pictures and absorb the amazing details that went into the creation of every room, from the bowling jacket in Alice’s bedroom closet and her nearby bucket of cleaning supplies to the blueprints on the desk in Mike’s home office to the Kitty Karry-All doll on little Cindy’s bed and the wedding photo in the master bedroom.  Tiger’s doghouse in the backyard.  The clay vase in the living room that the kids once broke.  The small couch Jan sat on when she couldn’t help but complain about “Marcia! Marcia! Marcia!”  (You can see many of the rooms and interior details here.)

There are a few inauthentic but loving tributes and reference points scattered throughout, such as a photo of Brady Bunch executive producer Sherwood Schwartz on Alice's dresser, a paperweight on Carol's nightstand with a heart inside that came from Florence Henderson's personal collection of hearts (she was born on Valentine's Day) and a handwritten "note" from Marcia on her desk to her crush, Davy Jones of The Monkees, asking him to sing at her school (which he did in one episode), amusingly signed "Marcia, Marcia, Marcia." 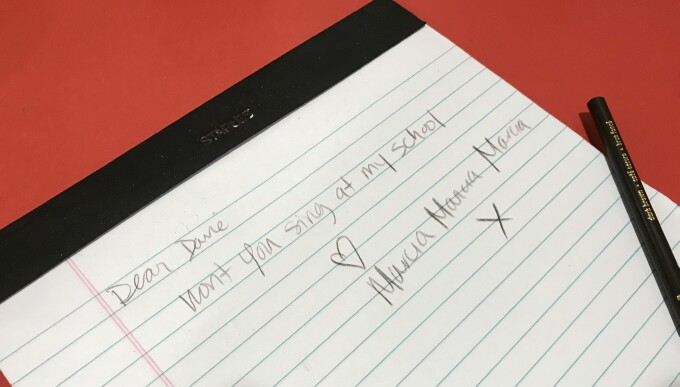 In terms of total immersion into something that never really existed, the only experience I can compare this to is visiting the Wizarding World of Harry Potter attraction in Orlando, which is meticulous in its re-creation of villages, castles and other locales from the Potter novels and movies.  But the Harry Potter attraction is an expansive world unto itself, so big and busy that it is easy to feel overwhelmed.  And it has rides.  The Brady house is quiet, and much more intimate, as befits an “attraction” that has been integral to the entertainment of the masses for a half-century.

If you are reading this article you already know that HGTV brought together many of its on-camera stars along with the six original Brady kids -- Barry Williams, Maureen McCormick, Christopher Knight, Eve Plumb, Mike Lookinland and Susan Olsen --  to do whatever it took to transform the inside of 11222 Dilling Street into the home millions of people know and love.  That involved bumping out the back (so as to not alter the precious view from the front), building Greg’s attic bedroom in the basement, tracking down as many existing props as could be found and re-creating specific fabrics.  It was all filmed for the six-part series A Very Brady Renovation, which concluded this week.  Two additional specials, one set for the Christmas season, have been scheduled, but given the popularity of this project I have to believe HGTV (and other Discovery networks) might be looking for ways to keep the Bradys in the family.  (Barry Williams already worked with the Gas Monkey Garage crew on a special episode of Fast ‘N Loud in which they located a 1969 Plymouth Wagon and turned it into the Brady family car.) 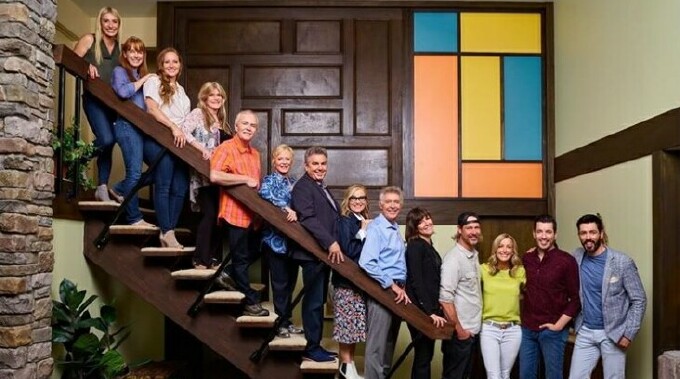 My time in the Brady house got me to thinking:  Are there other iconic television homes still standing, the exteriors of which were used in series that became timeless classics?  Southfork (from Dallas) seemed too easy and obvious.  I immediately flashed on the house in Minneapolis that served as 119 North Wetherley, where Mary Richards, Rhoda Morgenstern and Phyllis, Lars and Bess Lindstrom resided on The Mary Tyler Moore Show (which debuted just one year after The Brady Bunch began).  Imagine if HGTV (or another network) purchased that home (pictured below) and converted the interior into the apartments occupied by those characters.  I would walk from Connecticut to Minnesota to get a look at that.  Perhaps the surviving cast members of TMTMS could participate in some way.  But most likely not.

Regardless, the idea of 119 North Wetherley becoming a reality in any fashion would be a dream come true.  Which brings to mind another idea.  What would it take to develop a small theme park featuring iconic TV homes that visitors could pay to walk through, busily taking selfies inside and out?  The number of homes that could serve as attractions is quite large, but not at all unmanageable.  This pop-culture paradise could be called TV Land!  Are you listening, Viacom? 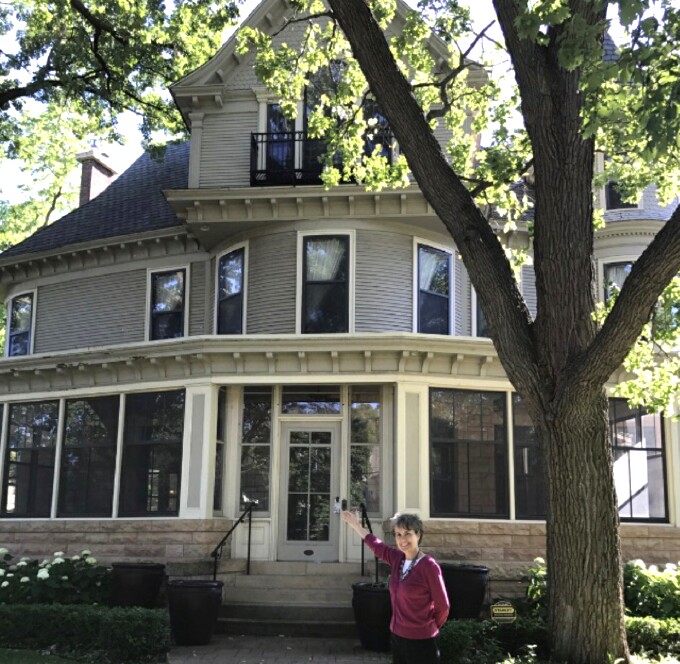