Adomni, Amobee, and All Things Out-of-Home 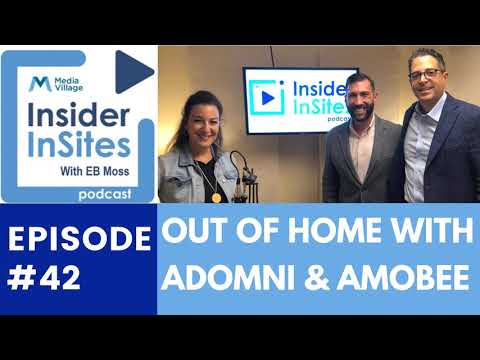 Jonathan Gudai was in the process of selling his e-commerce business in 2015. He'd spent his entire career since college in online sales when he met the founders of "this Adomni thing," who owned a bit of out-of-home inventory in the Las Vegas area. When he learned that most of the ads in the OOH world were sold person-to-person, and handled manually, he "got really excited about the opportunity to help bring my e-commerce and online buying prowess to a medium that we all can agree is here to stay."

After all, he realized, "we're all traveling throughout the world, and there are always going to be ads." So, Gudai dove in. In our recent conversation, he explains how, "by 2016, we had the first billboard running the Adomni software" that would help the company raise the bar for ease-of-buying and programmatic OOH, and how, as of today, the company has amassed more than 130,000 connected screens.

Gudai, who is now chief executive officer of the company that also aims to democratize digital out-of-home screens so they're easy and affordable, brought along Matthew Gussin for Episode 42 of the Insider InSites podcast. Gussin — also something of a media maverick — is national vice president at Amobee, an omnichannel advertising partner to Adomni, that uses data insights to identify where high-value customers actually spend time and generates bespoke campaigns for each customer.

Listen to the complete podcast to learn more about their joint efforts to shake up the marketing world with out-of-home, and how:

They also share insights on what worked and what could work again in the upcoming election season.

The following has been edited for clarity and length. Subscribe to MediaVillage's Insider InSites (just named a top podcast for digital advertising professionals!) on any or all of these platforms: Stitcher, Spotify, iHeartRadio, GooglePodcasts, Apple, TuneIn, and YouTube.

E.B. Moss: You've penned someMediaVillage articlesand in one, you wrote that out-of-home isn't just in your car or when you're walking around; it really is your entire life outside the home. That's a lot of inventory.

Jonathan Gudai: Out-of-home advertising is actually the second largest reach medium behind television in terms of impressions. It reaches 90 percent of consumers and comes in a lot of different shapes and sizes. People think about just roadside billboards, but there are also screens in bars and restaurants and shopping malls..., point-of-sale screens, and tops of ride-share vehicles driving around New York City and Los Angeles.

Moss: And the buying process for all that?

Matthew Gussin: [We had to] go source the inventory from each person in every single market in out-of-home in its previous existence, before Jonathan and his team helped pioneer this.… Instead of [needing] 50 campaigns to launch one campaign across the entire country — if you wanted the entire U.S. reach — you can now access one platform.

Moss: And the symbiotic relationship between Adomni and Amobee?

Gudai: Amobee is an omnichannel advertising partner.… There's a convergence that's happening. Marketers are caring less about … screen [sizes] and type and medium, and more about results. How they can drive those results… in as easy and transparent a way possible, has really been our focus…. Over the years, we realized that there's this amazing combinatory power of mobile devices; serving ads there to people that were exposed to the out-of-home screens was what actually got Adomni and Amobee together to say, "How can we … connect these two [to] bring more value to our customers?"

Gussin: It had been a fragmented journey. Amobee lacked a digital out-of-home partnership; Adomni lacked a mobile extension in some of these other things and it really just brought us together… so you're able to then reach an audience that is in-market — a digital out-of-home audience — but also capture them when they're on their mobile device or listening to Audible, or even listening to this podcast!

Moss: Jonathan, describe where out-of-home is today, where it's going in the next several years, and its new-ish ease-of-use in buying.

Gudai: …For us, it started on the supply side. For out-of-home — this very rich, impactful medium — to be harnessed in a platform, you needed to have critical mass. And buyers need to be able to come in, find what they're looking for — audiences or geos — and be able to have their budgets spent and measured in a way that fits to what they're doing with the rest of their objectives. For the last three years, we've seen an evolution in the major media owners embracing programmatic — like Lamar and Clear Channel in the billboard space and Lightbox in the shopping mall space — who have reformatted their selling models and reforming of their technology stacks to make this possible.

Gussin: …And to complement what Jonathan's doing, we're able to triangulate, [take advantage of deep learnings by either use first-, second, or third-party data, as well as CRM] to really understand the characteristics that make up who the ideal customer is. Once a company gives us some of their learnings, together we're going to understand where their hidden audience is. If you think your sweet spot is California and New York, and I show you Des Moines, Iowa is over-indexing, is that a value? We help them fish where they didn't even know the fish are.

Moss: Were there a lot of women who responded to theKylie Jenner campaignin, say, Des Moines or were they more in Las Vegas and LA?

Gudai: Des Moines, Iowa, and 1,099 other cities! [To explain], they're a client of ours that really had not done much in the out-of-home space, instead focusing on social channels and that's worked pretty well for them, I would say. But … within two business days, we were able to identify the markets and media types they wanted to reach, and we launched the largest programmatic billboard campaign ever: 4,300 roadside billboards at the same time, and over 300 shopping malls that had video ads...

Moss:  We have a big election coming up and, historically, there has been buzz around how some elections may have been influenced, or will be, by programmatic. Thoughts?

Gussin: … In the last election, you had one party that thought everybody was their customer, and that means you're going to target all 50 states and every single demographic, 18 plus. The other party said, "We don't need to be in every state." Meaning, by putting together a big data campaign, versus a spray-and-pray model, you're able to target the specific coal workers when you needed to in Pennsylvania to get those specific votes….

Gudai: So, in this next coming election, to me, it's very much the Wild West right now. Being able to tap into what we're doing with big data in applying a digital out-of-home screen, too, I think it's just very complementary…

There's a targeting side to it and then, ultimately, it's just having an open mind to use new approaches or new innovations, and do some testing, and then take that testing, and apply those learnings towards something bigger….

The difference is that this landscape has never been more fragmented. So, when we look at the traditional ways, which has been TV or online, and to some extent out-of-home…, we say, "Wait a minute, we have an opportunity now with programmatic where you can target your audiences using the data sets that Amobee and Adomni have with PlaceIQ, and all the various proprietary datasets."

Moss: … In terms of creative, inmy last episode, Jennifer Zimmerman of mcgarrybowen was talking about the essential need to marry data and creative. What's the most creative aspect we can see implemented in digital out-of-home?

Gussin: …By using dynamic creative that's changing based on where the customer is in their journey, whether it's going from digital out-of-home, realizing they saw it on their mobile, and then transitioning it to continue further down that funnel, you're able to really engage with them, so they feel like it's a one-to-one connection, versus just being broadly spoken to.

Moss: It can also be storytelling, like the oldBurma Shave days. It's the evolution of outdoor and telling the story in the right time and the right place.

Gudai: Yeah…. Now it's limited just by the brands and the agencies saying, "OK, let's harness this. Let's tell a story, so that we're not placing the same ad on the large format screen as we're putting on the mobile ad, but they need to be connected in a way.…"

Gussin: The moment that we're in now feels eerily similar to what I experienced in 2009 when people were like, "What's programmatic? We already work with these specific publishers. Why would we buy from you?" ... Fast-forward to today, there are 50 billion impressions available. So, what's happened in the market? They've adopted it. Publishers have pushed more inventory there and I really think that they're on the cutting edge of taking advantage of what's really going to blow up.