After Some Early Turbulence, HBO Max's "The Flight Attendant" Has Leveled Off 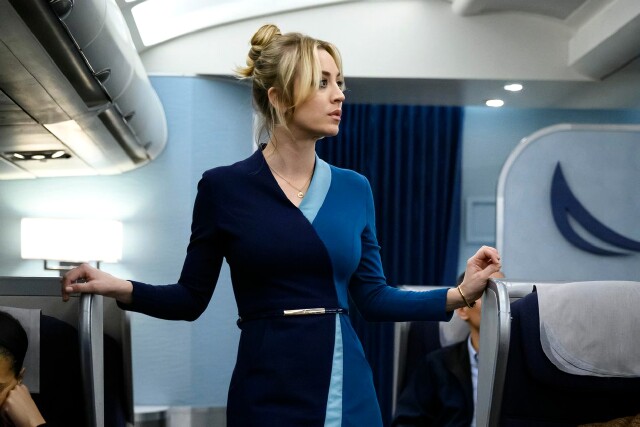 The HBO Max limited series The Flight Attendant first took flight about three weeks ago, and while its takeoff was a shaky one, it has since corrected its course. Starring The Big Bang Theory's Kaley Cuoco, Game of Thrones' Michiel Huisman, Girls' Zosia Mamet, Doctor Who's Michelle Gomez and New York's own Rosie Perez, this thriller asks the question, "What happens when a hapless, alcoholic flight attendant finds her life becoming more of a train wreck than she is?" The answer is "just make things worse," which is great, because that answer actually made the show better. (Warning: Spoilers abound!)

In The Flight Attendant, Cuoco's character, Cassie (the titular flight attendant), is more or less a total mess. They sell it to you like she's just a reckless party girl who maybe has too much fun at first, but as things progress it becomes clear that she's been on a destructive path for a while. Anyway, she ends up flirting with a charming passenger named Alex Sokolov (Huisman), with whom she ends up going out later that night. After a whirlwind of drinks, dinner and dancing they retire for the night at Alex's, only for Cassie to find lover boy dead -- his throat slit right where they slept -- when she wakes up the following morning. What follows is basically a montage of Cassie making every damn mistake that someone could possibly make in a situation like that; almost frustratingly so, at times.

The hook of this show is the actual unraveling of the mystery itself. It took time to get into that, though, because everything during the flawed first episode was overshadowed by the absence of any reason why viewers should care at all about this chick Cassie. There also was some early ambiguity around the intended tone of the show, but that may have been the effect of seeing Cuoco in a role that wasn't all that different from the woman she played on BBT. If they had HBO'd it up a little at the start it might have shaken that feeling and made for more impactful storytelling at the top, and that might have lessened the PG-13-ish vibe that hung over it.

Fortunately, that all seemed to drop away by the end of the second episode.

Once it was "on it's legs" (or "in the air," so to speak), the momentum TFA gained became its saving grace. Now we have the FBI breathing down Cassie's neck; we have her best friend and lawyer, Annie (Mamet), involved to an overtly dangerous degree; we have Megan (Perez), a coworker of Cassie's, in a subplot where she's doing corporate espionage on her husband's company for some shady international types, and all the while a woman named Miranda (Gomez) is doing her damnedest to get to Cassie and shut her up once and for all.

And then there is Cassie's deteriorating mental state and the fact that she's been working things out via hallucinations of Alex that seem to stem from memories she barely has of him from just one night together. Turns out that, just like Alex's mysterious death, there was a lot more going on in this show than just how it seemed in the beginning.

Somewhere during that second (and even the third) episode, actual character development started to take place, and the parts that seemed to feel thin suddenly had substance. Now, the show is moving right along, leaving the audience not only with solid cliffhangers, but also a balance of dramatic tension and comic relief that doesn't feel awkward or forced.

After a rough climb, this plane has leveled out.

All of that said, I do have one or two questions. For example, why is Cassie so hung up on Alex? It's clearly a question that the writers meant for viewers to be asking themselves, but seriously … why? She had one date with the man, and the entire premise of the show is that he was some charming stranger for like, I don't know, six hours, and then only existed as both the reminder and cause of the most traumatic night of her life -- a night that she can barely even remember. She's a single adult woman, so I doubt this is her first one-night stand, so why did he make such a big impression? It's probably because having Cassie talk to herself via a projection of his character in her mind is a way more entertaining way of disseminating exposition than say, just having her talk to her own reflection, or worse, her breaking the fourth wall and talking directly to us.

TFA did what good shows do: It grew on me. Now the only question is how many seasons will this series get to fly? Given what's happened in the story so far, I can't imagine them dragging this Alex thing too far into the next season. I mean, the name of the show is The Flight Attendant, not Passenger 3-C, so odds are we'll find Cassie bumbling her way into yet another high stakes mystery that she'll spend another whole season only making worse. But who knows? I could be wrong. Either way, The Flight Attendant is a trip, and with only three episodes left, I guess I'm onboard with finding out.