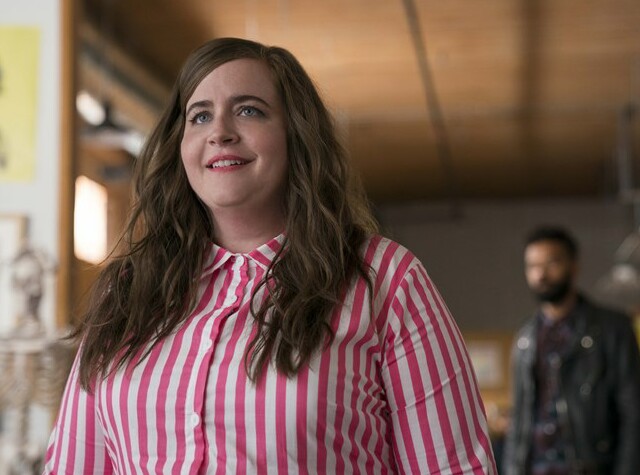 The crazy talented Aidy Bryant, a regular on Saturday Night Live since 2012, now stars in her own comedy on Hulu, and while it would be easy for any show to feel like nothing more than white noise in the onslaught of new content being dropped on our digital doorsteps every day, Shrill is a huge exception.

Produced by Elizabeth Banks and Lorne Michaels, among others, Shrill centers on Annie Easton (Bryant), whose story is based on a memoir of the same name written by Lindy West (writer, comedian, activist and executive producer of this series) and was adapted for TV by Ali Rushfield (also an executive producer).  Simply put, Annie’s a big girl, and she’s tired of being constantly confronted and judged because of her weight.  She’s also a writer at “The Thorn” (a fictional Portland-based news publication) and while she’s got the passion her vocation requires, she’s yet to be given the opportunity to really showcase her skills.  As we go through this surprisingly short six-episode season, we follow Ms. Easton on two main journeys:  One professional, one personal, both revolving around how she feels about herself and how she lets people treat her.

First of all, I love the casting choices made here.  Bryant (who’s also a co-producer on the series) is perfect as Annie.  She brings a sweetness and vulnerability to the character that’s unbelievably endearing.  Her SNL-honed comedic chops are on full display, as well.  Then we have Fran, played by Lolly Adefope, and Amadi, played by Ian Owens.  Fran is Annie’s housemate and best friend, and Amadi is Annie’s “work husband,” more or less.  These two are definitely her main source of support and friendship, and they are both cool as hell in that way that only TV best friends ever are.  Fran has a snarky straightforwardness to her that I can’t help but love.  My favorite quote from her?  It’s a tie between, “Get an abortion, before it becomes illegal or something” and “I don’t apologize to white people.”

Annie is also dating a guy … kind of.  Does having sex under the cover of night and then sneaking out the back door before anyone sees you count as dating?  If so, Annie and Ryan are dating so hard.

Played by Luka Jones, Ryan is lovable as lovable goofs go.  Maybe “lovable” isn’t how Annie would describe him -- “a disrespectful baby, but a man who knows better” is how she puts it, I believe -- but there’s a genuine sincerity to his shock and remorse when confronted with how he’s hurt her (at any given time) that leads me to believe there isn’t a malicious bone in his body, even if he is kind of a dummy.  Jones very easily conveys what’s unappealing about his character and what Annie sees in him at the same time, which is probably why I spent a lot of time rooting for Ryan to get his shit together.

There are other supporting players (Patti Harrison and Jo Firestone are both hilarious, and John Cameron Mitchell’s “Gabe” is integral), but I’d say none are more important to Annie’s overall narrative then her parents, Vera and Bill, who are played by Julia Sweeney and Daniel Stern, respectively.  (Both of them are legends in their own rights and it’s so great to have them back on TV in great roles.)  Sweeney steals every scene she is in as the passive aggressively controlling Vera, and Stern is an absolute joy to watch as Annie’s ever-optimistic, cancer-fighting Dad.

The best moments in this show are when Annie, whose modus operandi is normally a metaphorical tail tuck, finally decides to stand up for herself.  Her “feel good” moments genuinely made me, well, feel good.  Same thing on the flip side, when people belittled her, or were outright disrespectful, I found it both enragingand sad.  The people who seem to echo those #TeamAnnie sentiments are mostly people like Fran -- who doesn’t even understand the concept of biting her tongue -- and Amadi who, like Fran, does and always will have Annie’s back.

In the episode “Pool,” Annie is invited to the “Fat Babe Pool Party,” an event meant to be a safe place for large women to have fun and be body positive in a world that is anything but.  I loved this episode, for many reasons, but mostly because of the effect the party had on Annie.  Long story short, she was being all tense and reserved when she first arrived at what seemed like a pretty baller pool party -- one she wore jeans and a button-down to, by the way -- but before long she relaxed, ditched the extra clothing and then jumped directly into the pool with everyone else who was enjoying being in their own skin in a way she never had before.  The release of all that tension was so cathartic, not only as if she’d been holding back much more and much longer than anyone had realized, but also because, for a moment at least, she was free from the mental prison of societal expectation.  Pure joy is rarely seen on TV.  Who would have expected it in a show titled Shrill?

Fat-shaming is a serious issue; one that’s more hurtful than most people realize.  Why does anyone feel it’s okay, or their place even, to challenge or mock someone about something so personal?  Is it because of the implied autonomy we all supposedly have over our physical appearance?  I don’t know, but I feel like the point of Shrill is that none of that matters, because it’s nobody’s damn business.  No one has to be what another person wants them to be, nor do they have to look the way another person thinks they should look.  Confronting someone about their weight is like asking a woman, “Why haven’t you had any kids yet?”  Maybe she doesn’t want to.  Maybe she can’t.  Who cares?  Leave.  Her.  Alone.

Annie’s journey is ultimately about owning it.  Own who you are and tell anyone who doesn’t like it to go to hell.

In an industry riddled with male voices, I’ve got to say that I’m a huge fan of this new wave of female written and run shows.  Russian Doll, Better Things, Broad City and even going “back” to shows like Girls, The Mindy Project and New Girl -- every single one of these shows used its platform to make the world a little less ignorant, make TV a little bit funnier, and make women feel a lot more empowered.  Shrill is a very worthy addition to the group.  My biggest gripe -- in fact, my only gripe -- is the fact that the season is only six episodes long.  There should have been ten, but I’m sure they’ll fix that during the inevitable second season.