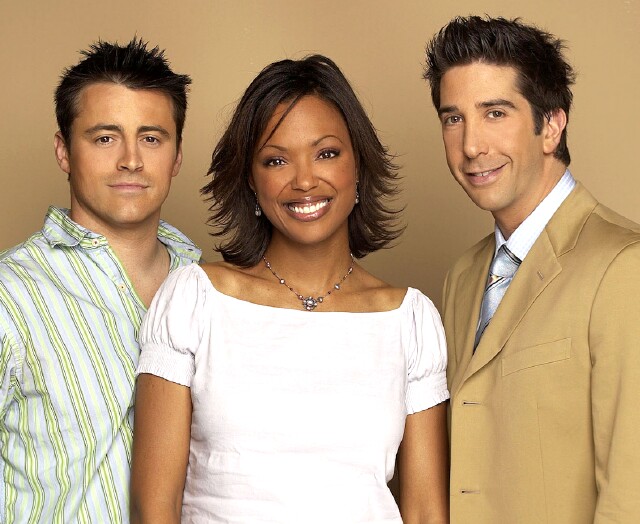 (Editor's note:  This column was originally published on July 12, 2018.)  Since leaving CBS’ The Talk a year ago, life has been non-stop for self-admitted workaholic Aisha Tyler. Not only has she produced and directed her first feature film (Axis, currently streaming on VOD platforms), she continues to provide the voice of Lana Kane for FX’s animated hit Archer (as she has for the past nine years); heads her own chat show on AMC titled Unapologetic with Aisha Tyler, continues her role as Dr. Tara Lewis on CBS’ Criminal Minds, and hosts The CW’s Whose Line Is It Anyway?  She has been called the female Ryan Seacrest and she agrees.  But back in 2002 the stand-up comic turned multifaceted performer was reeling from the cancelation of Talk SouponE! (the show she’d hosted for a year).  That same year Tyler made the decision to switch career gears, expand her resume and try acting.  Little did she know the decision would lead to a groundbreaking guest spot on one of her favorite shows -- Friends.  It would also become something that would forever change her life.

Long criticized for its lack of diversity, especially since it was about young adults in New York City, Friends producers tackled the criticism head-on with the introduction of Dr. Charlie Wheeler, a paleontology professor who begins working with Ross (Davis Schwimmer).  Some critics saw the casting of an African-American actress as a pivotal character in the series’ 9th and 10th seasons (2003/4) as “a little too late,” but Tyler knew she doing something special.  “I knew when I got it that it was a big deal,” Tyler told MediaVillage of the role.  “I was a fan of the show before I even got the job.  I knew it was the big show on TV when I got it and I knew that it would be amazing.  I was really grateful for the experience; just so grateful for it.”

As a fan of the series, seeing the familiar surroundings of the show come to life before her eyes was surreal for Tyler.  “Walking into Monica's apartment was absolutely amazing,” she recalled.  “I actually was looking for Ugly Naked Guy out the window.  I do remember being disappointed because it was just a hallway.”

After a failed romance with Joey, Tyler’s character would find herself united with Ross, but only after realizing the Joey/Charlie union was a Jurassic-sized mistake.  Sadly the Dr. Geller/Dr. Wheeler romance would be derailed, after Charlie enlisted her former flame Dr. Benjamin Hobart (Greg Kinnear) to give Ross a research grant.  As if the experience of becoming an honorary “Friend” wasn’t enough for Tyler, she was also thrilled to work opposite Oscar-nominated Kinnear, another former host of Talk Soup.

“I remember when they brought in my ex-boyfriend, who I was going to get back together with, and it ended up being Greg Kinnear,” she said.  “It was one of those meta-moments with the hosts of Talk Soup!  That was just such an amazing experience.  He was a big deal coming onto the show.”

Tyler revealed that it was a moment that almost never happened.  “They had been kicking around some names and he might've been [played by] Dustin Hoffman,” she said.  “They really just wanted these huge names.”

Like many of the show's guest-stars, Tyler credits the close-knit Friends cast for making her feel welcome and for making her a friend of Friends.  “I remember my first week, and that first day we shot our first live taping, I was urinating on myself,” she laughed.  “I was so terrified, I really needed some Depends.  Matthew Perry (Chandler Bing) came up to me and goes, ‘Get ready for your life to change.’  I remember thinking, ‘I was never, nor am I now a ‘Friend’.  I will never ever be a ‘Friend.’  But he was right, it really did change my life – and forever I will be a friend of Friends.  It's a very small group of people and I will never forget that experience.”

Nor will fans of the series, new generations of which continue to find the series in syndication and on Netflix.  Despite Tyler’s ever-growing laundry list of diverse credits, to many of them she will always be Charlie.  “It's probably the thing that people most remember me for,” she admitted.  “So many people still watch that show and watched it then.  It's still very resonant with me because people tell me all the time how much they love me from Friends, and it's been a long time.”

Long enough for Tyler to have her own thoughts on the whereabouts of Charlie today.  “I'm sure she's on like her fourth husband,” she laughed.  “Charlie is like this intelligent woman who’s very sexual and thinks she's in love when she's not. She's probably having sex with some 29-year-old Ph.D. candidate who cooks for her and lives in her home.  She just uses him for sex!”