"Black Jesus" Is Back to Save Us All 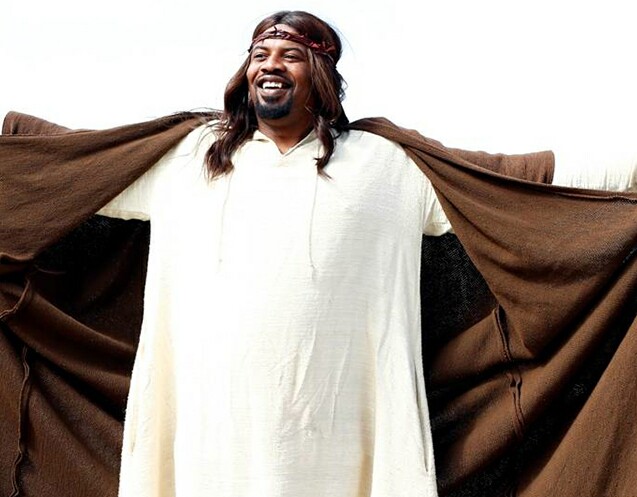 Our prayers have been answered!  Black Jesus is back, and right on time if you ask me.  Created by Mike Clattenberg and Aaron McGruder (creator of The Boondocks) and starring Gerald “Slink” Johnson as our titular son of God, this hilarious look at the Compton-based Christ has come back to WarnerMedia's Adult Swim after an almost four-year hiatus.  A lot has happened in that time (both on the show and in real life) and it seems to me that the big homey’s gospel might be exactly what we all need right now.  Fortunately for us, spreading the good news is exactly what Black Jesus is all about.

For those of you who are still a bit confused, Black Jesus is about, well, a Black Jesus.  Unlike the inexplicably dark-haired, blue-eyed versions depicted all over candles, crosses and those kind of creepy paintings some people keep in their homes, this Jesus is a 6’7” tall, brown-haired, brown-eyed, long-robe-and-sandals-wearing black man who somehow lives in present day Compton and cusses a bunch.  Every typical Jesus stereotype that exists is still pretty much what comprises his character and behaviors -- being 2000 years old, walking on water, turning water to wine, healing people, hearing everyone’s prayers, constantly trying to uplift the downtrodden and glorify his pops, etc.  He’s also plagued by the same emotional imperfections as the rest of us due to his inherent humanity (you know, being half mortal and all).  So, imagine all that, and then imagine it all coming out of a dude who’s lived in the hood his whole life.

The thing is, this is what makes our protagonist the perfect vehicle for commentary.  Jesus is pure of heart (a perk of being the Almighty’s offspring) even though he isn’t perfect, which is okay, because he’s still human.  Being black allows him to address culture-specific topics without coming off as preachy or out of touch at all.  I mean, yeah, sometimes Jesus is literally preaching, but in this series, he’s seen as more or less of an equal by his peers, which usually turns his admonishments and spiritual advice into straight up debates.  That, of course, allows for whatever topic is being dealt with to literally be discussed out loud for the viewers’ benefit.

Which brings us to season three.  The first episode was just telecast last Friday, and right off the bat it proved to be exactly what I’d hoped for and missed a lot.  After an over-the-top chase scene, Jesus ends up getting arrested for fleeing a drug raid done on a spot where he was ministering to some brothers about their lifestyle choices.  While trying to appeal to the good will in the judge’s heart, he says, “We’ve got to do something about this massive incarceration of people of color.”  He goes on, “When you were six years old, you decided to be a judge ‘cause you wanted to put the joker away, once and for all.  Now, I know you’re not a bad person, your honor, but you’re not putting the joker away.  You’re putting away poor people.  Stop destroying families and children.  Stop the privatization and profiteering of human struggle.”  At this point, I was barely five minutes into the episode.  The balance shown here -- to be able to bounce between Friday-level hood humor and resounding moments of real-world truth -- was nothing short of impressive, but then again, Black Jesus has always been this good.

So, what’s different, if anything?  Well, Kali Hawk’s character Maggie wasn’t even mentioned, for one.  Andra Fuller’s character Fish who, like Maggie, had been around since the very first episode, supposedly “took that job on the pipeline,” whatever the hell that means.  Vic, the mean, bald bastard played to perfection by the late great Charlie Murphy, somehow passed away off-screen, as made clear by a comment Jesus makes to Lloyd, the character played by John Witherspoon.  “Oh man, Vic’s so proud of you.  Pops told me.  He be chilling with Vic all the time, man.  Vic doing good.” And I’ve got to say, I think sending Charlie’s character to heaven was a pretty sweet touch.

Some new characters include Ambro (Jamar Malachi Neighbors), an ex-soldier who’s somehow a terrible security guard, and Nessa (DomiNque Perry), a woman whose most notable traits are her bubbling personality and “lopsided titties.”  Also new are the “Yoga Bitches,” as people keep calling them.  So far there only seems to be three of them: Their leader Teresa (Paula Jai Parker), Bully (Candice Renee), and the oh-so-hilarious Tyree Elaine as Bay Bay.  All through this episode Bay Bay has the hots for Jesus, and it is comedy gold.  “Fine ass nigga.  Oof.  Make a bitch want to get her life together.”  She drops gems like that throughout the season premiere.

The world isn’t a very fun place right now, and I think that something like this -- something that’s accessible, and unapologetically funny, and extremely socio-politically aware -- might be exactly the tonic we all need.  In a very black mid-90’s comedy kind of way, it feels like a Trojan horse of sorts; the truths are hidden within the funny.

The only thing missing is Keenan Ivory Wayans yelling, “Message!”

Black Jesus is telecast Friday at midnight on Adult Swim.