By Oriana Schwindt The Age of Aging Archives 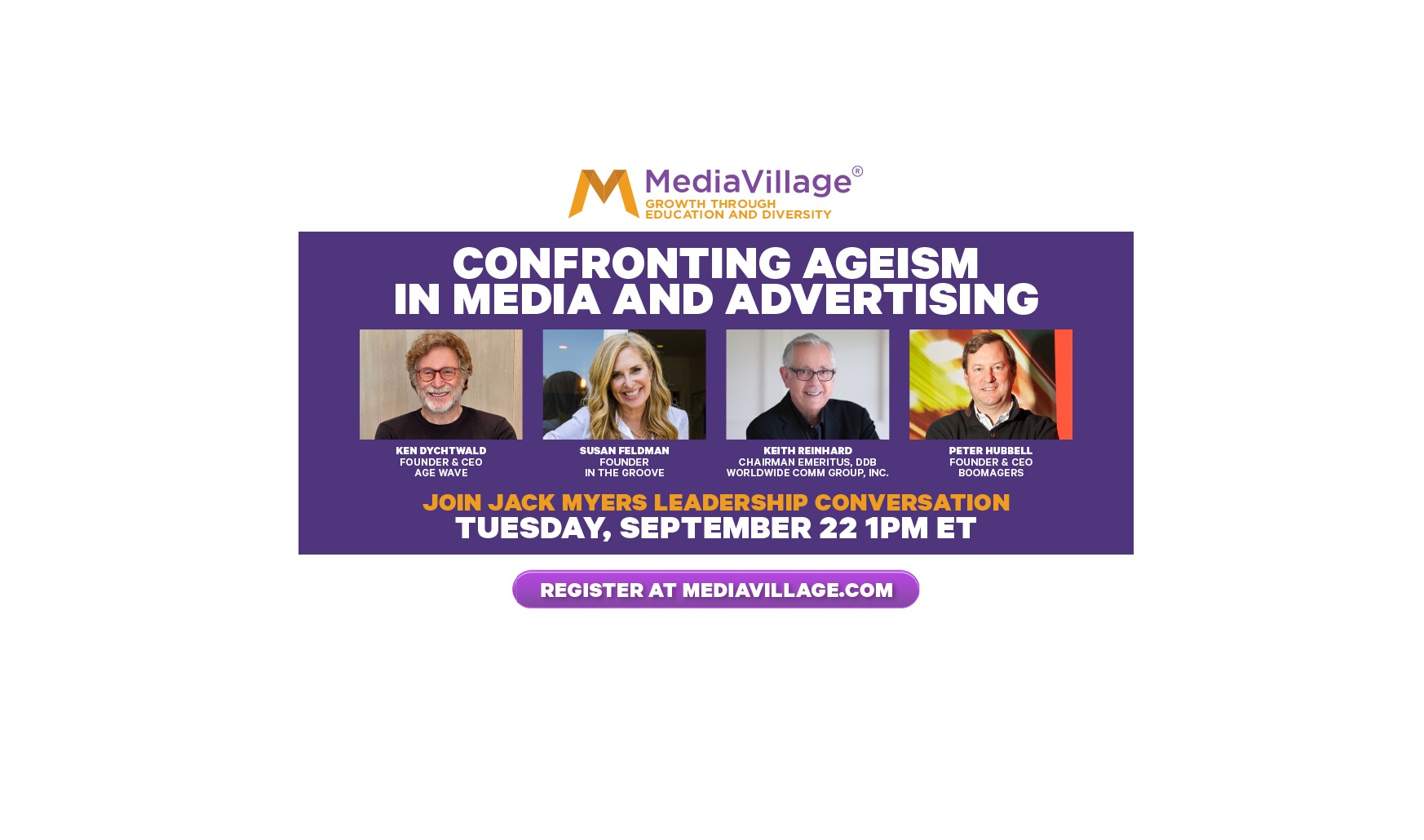 Watch Now the ZOOM Conversation on Why Madison Ave. Ageism is Ending and the Coming Boom in Boomer Marketing. Details below and watch HERE.

The 18-49 and 25-54 demographics have famously been the ad world's "dollar demo," the target audiences for so many clients. But what about Boomers?

The long-ignored demo of 55+ is a gold mine waiting for advertisers to commit any amount of effort to addressing them, and MediaVillage founder Jack Myers has assembled a crackerjack panel to discuss the opportunities, what marketers are missing, and what they may be doing right. Join Jack Myers' Leadership Conversation with Boomerologists Peter Hubbell (CEO of BoomAgers) and Susan Feldman ( co-founder of One Kings Lane and founder of In the Groove), expert on ageing Ken Dychtwald (CEO at Age Wave), and ad world legend Keith Reinhard (Chairman Emeritus at DDB Worldwide) on Tuesday, September 22 at 1PM ET for an in-depth discussion and exploration of ageism challenges to accurate targeting of the leading consumer market.

This Is Not a New Issue

Dychtwald's new book, What Retirees Want, lays out 30 years of research on aging, a must-read for an industry that has refused to change.

Dychtwald has been banging the Boomer drum all over Madison Avenue for decades, and has found that he gets asked the same three questions over and over again: "Have there been any changes to reduce ageism? Are there any blatant mistakes marketers are making that they can stop right now?" and "What sectors or industries are going to explode as a result of this phenomenon?"

Dychtwald can and will answer those questions, but more pressing to him is that the ad industry needs a total overhaul of its attitudes towards people over 60. "When you see an ad targeted at someone 60-plus, is it ever someone who's still working?" he says. "No, it's always someone who can't remember their wife's name."

Fixes Both Easy and Not-So-Easy

For Hubbell, there are a few factors that are preventing marketers from reaping the rewards of the 55+ audience, including simple inertia. The industry has operated in a certain way for 70 years, and even with various changings of the guard, entrenched ways of doing things die hard.

Millennials are often viewed as the only viable audience for brands, but, Hubbell says, "today's 50-year-old is acting like a 35-year-old." The old mindset of people forming brand loyalty in their mid-20s and never changing their minds about anything just doesn't apply anymore—there are an infinity of products that didn't exist when Boomers were in their 20s, and Boomers are set to live significantly longer lives. According to Dychtwald's research, the expected stagnation in this third life act doesn't actually occur. People keep growing and changing.

The current dichotomy of "Millennials or Boomers" doesn't serve anyone particularly well, least of all brands. This is especially true as multigenerational households are becoming more common, Hubbell adds: "If you can tell a story that involves a Baby Boomer and their Millennial children and demonstrate that that brand serves both, that's very effective."

Female Boomers, in particular, face a massive disadvantage in a culture obsessed with youth. "There's very few people that I see making a huge effort, I think, to engage our demographic," says Feldman. Feldman's lifestyle destination In the Groove looks to accrue a community of engaged female Boomers. "We're healthier, we're more engaged, than any generation before us," she says. "There's this huge white space here."

It's not all bad news for female boomers, though—Feldman says companies are finally starting to develop products for this cohort, forcing companies to think about how to actually market to these potential customers.

Agencies Need to Address Their Own Internal Ageism Pronto

But it's not just that marketers have been slow to realize the value of the 55+ audience—there's an ageism within ad agencies themselves that Reinhard says has been extremely detrimental to both audience strategy and the creative itself.

"Where are the stories?" Reinhard asks. The core of advertising—the most effective way to message—is storytelling, but older agency members who have the life experience to know what makes a good story have been systematically pushed out, replaced by younger people who Reinhard says "aren't as sure" about the power of a good story.

The agencies aren't solely to blame, here, Reinhard acknowledges. Clients often want to see fresh faces with fresh takes in pitches, to be reassured that they're on the cutting edge. And pressures on the bottom line can have ageist consequences: "You can get two to three junior creatives for the cost of a senior one," Reinhard says. "The real cost, though, is the institutional knowledge and life experience."

Myers, who will host the conversation, has been an outspoken activist against age bias in media buying, calling it "non-transparent, unethical and borderline illegal misrepresentation of many brand marketers' actual target consumers."

Join the Conversationon September 22 at 1 p.m. ET for much, much more.