CBS' "B Positive" Gets a B-Minus So Far 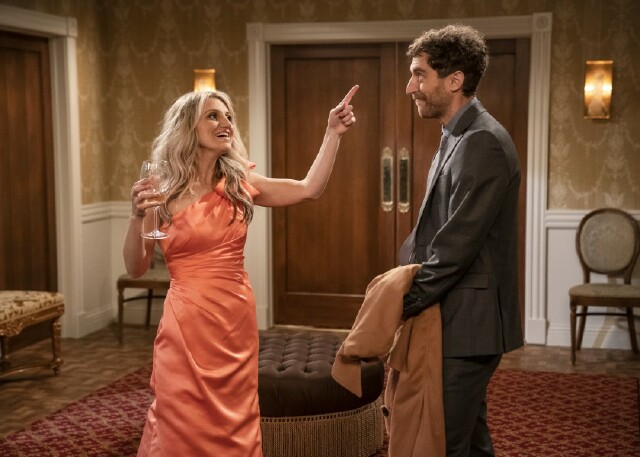 As Paula Abdul once asserted through song and dance, opposites attract. That concept tends to pop up in pretty much every form of American entertainment, especially on television, where shows from The Odd Couple to Bob Hearts Abishola have done the whole "it works because they're different" bit, and it's usually a guaranteed crowd pleaser. But the new CBS sitcom B Positive, which virtually spins around that notion, could be an exception.

Brought to us by reliable hit-maker Chuck Lorre (who is also the executive producer of current CBS comedies Young Sheldon, Mom and the aforementioed Bob Hearts Abishola), B Positive stars Annaleigh Ashford (top left) and Silicon Valley's Thomas Middleditch (top right) as Gina and Drew, respectively. We open on Drew finding out that he has "renal failure" and requires a kidney transplant, which requires a donor (I know, fun, right?). Most people would ask their close friends or family for help and support in this situation, but Drew doesn't have any friends because he sucks, so that's out. Fortunately for him, he happens to bump into an old friend from high school, party-girl Gina, who hears of his plight and offers to donate a kidney of her own, even though her behavior does scream "I'm slightly irresponsible outside of work" a bit louder than it screams "I need help." Unless she can get her act together, there won't be much of a kidney left for her to donate.

Now, while B Positive does follow the standard sitcom format that we've all come to know and to which we have grown numbingly accustomed, something is missing.

Question: Can you guess what that is?

Hear me out. Sure, Middleditch is great at delivering us this downtrodden, kind of salty lead in Drew, and I get that Gina is supposed to serve as his polar opposite, being bright and positive and carefree, but at times this just makes Drew feel like an unbearable drag. This isn't even really Drew's (or Middleditch's) fault, because everything this character is based on is just not fun in the most excruciatingly real ways.

Drew's whole thing is that he's suffering from kidney failure while going through a shitty divorce, on top of having a teenage daughter who will most likely push him away more and more as she gets older. Not exactly a feel-good premise, amirite? Sure, things have pepped up a little as the show has chugged along (episode five premieres this week), but most of that sunshine comes from Gina's character (which is the point, I guess).

The standout supporting characters are Drew's tweenaged daughter, Maddie (Izzy G.); Drew's ex, Julia (Sara Rue), and Gina's friend Gabby (Kether Donohue, You're the Worst). He also has a group of dialysis buddies he chats it up with: no-B.S. business lady Samantha (Briga Heelan, Great News), divorcée Jerry (David Anthony Higgins), ex-NFL player Eli (Terrence Terrell) and the nurse technician that assists them all, Gideon (Darryl Stephens). The dialysis group makes for a collective light that the show uses to combat the bleakness of its premise and lead character, but alas, there's only so much chair-bound adults with bad kidneys can do to brighten the mood.

I feel there should have been something more when this story began to endear us all to Drew before having us take this journey with him. The writers should have Mrs. Doubtfire'd the guy. I don't mean dress him up like an old lady and have him near kill a dude with a food allergy, but rather, make him such a sympathetic character that viewers would choose to ignore obvious truths such as, "this dude was a terrible husband who alienated his wife by making her eventually resent him for not living up to the commitment he made to her as a man and a lover" and replace it with "this guy is hilarious at voices and his wife seems like a witch." Drew doesn't feel like someone you want to defend at first, though; he just seems, well, sad.

Middleditch does what he can, but that isn't much, at least not yet. Ashford does a solid job being five-foot-something of pure blonde chaos as Gina, but she also serves as the heart of the show, oftentimes winning every scene she's in with a stream of light-heartedness and endless positivity that carries everyone and everything around her. The result of all this is something that is definitely watchable, even if the feeling I occasionally get is like, "Who is this even for?" I'm good with the rest of the cast, but I do think that Donohue's talent is underused on a character like Gabby. Maybe, as the season continues, she'll get more of a chance to shine. But as of right now, I'm not seeing any of that range and scene-stealing charisma that made her pop on You're the Worst.

I'm sure that things will pick up for ol' Drew, but if he ever actually gets that kidney, or dies, I have to assume the show's over, right? And the opposites attract thing is over the second he adopts Gina's devil-may-care mentality, so, that'll never happen either, right? This one's probably about the journey, and if that's the case, I just hope our lead becomes slightly less of a bummer.