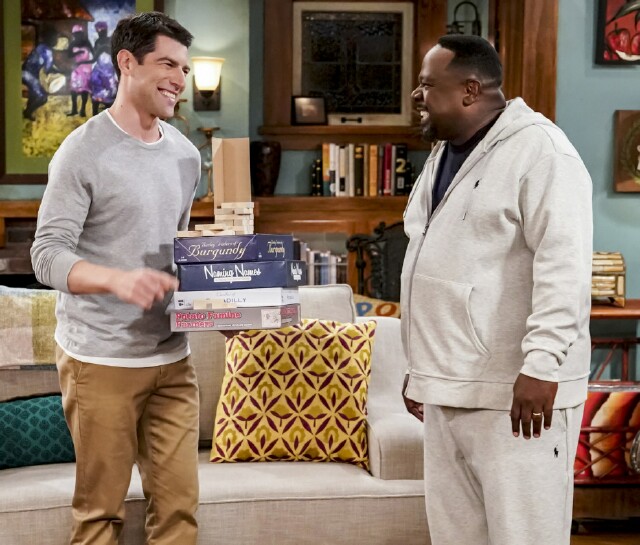 CBS’ The Neighborhood is covering that touchy topic we’ve all been dying to see tackled on television again: Race. I know, I know … I’m just as excited as you are, but just like the vitamins I slip into my kids’ food, it’s all about the presentation.  Armed with household names like Cedric the Entertainer (The Last O.G.) and Max Greenfield (New Girl) -- both of whom are supported by top-notch talent like Tichina Arnold (Everybody Hates Chris) and Beth Behrs (2 Broke Girls) -– it seems as if CBS agrees with that sentiment, and seeks to wrap its healthy cultural commentary in a sugary layer of classic laugh-track levity.  This interracial fish-out-of-water story wants to show us all that we’re not so different, you and I.  Will it actually work, though?  Maybe.  Let’s start with all the things that do work in favor of Schmidt Meets Black People -- I mean, The Neighborhood.

The premise is simple and straightforward.  Schmidt, I mean Dave, and the rest of the Johnson clan move from the Midwest -- a section of America presumably known for its abundant whiteness -- to the “tough L.A. neighborhood” where the Butlers, their new neighbors, currently reside.  Their move from what I can only assume is cul-de-sac country isn’t predicated by any sort of drama, but by a vaguely-described job opportunity afforded Mrs. Johnson.

Cedric the Entertainer (pictured at top right) plays local neighborhood dad type Calvin Butler, father to two full grown sons -- the jobless one who lives at home, Malcolm (Sheaun McKinney), and the “successful” one, Marty (Marcel Spears).  Greenfield (top left) plays Dave Johnson, husband to Gemma Johnson (Behrs, pictured below, right, opposite Arnold) and father to their son Grover (Hank Greenspan).  Everyone seems to fit their respective types pretty well, and when combined the star power that most of them bring to this project from their previous work amounts to enough to get even the channel surfy-est of us to stop and pay attention for a while.

Cedric, Greenfield, Arnold and Behrs are pretty much no-brainers, seeing as the shows they just came off were pretty well-known.  McKinney serves as an entry point into the show, evidenced by his character Malcolm’s hand being in as much of the comedy as it is in the drama.  This works because McKinney’s resumé reflects the same ratio of comedy to drama due to sitcoms like Great News and more serious parts like his small role on FX’s Snowfall. 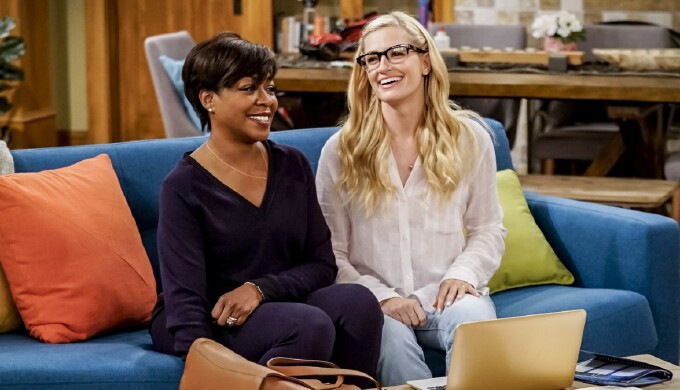 Then, of course, there’s Spears’ character Marty, who almost exclusively provides comic relief, something at which Spears is a genius.  (He was arguably the most hilarious part of ABC’s ill-fated sitcom The Mayor.)  We may not see Spears often enough for him to be a household name just yet, but his influence is always felt.

All that aside, this show has something that has the potential to be as damaging as it helpful: An agenda.  The best shows on TV have an ethos, or an underlying belief; a kind of code that they “live” by.  An agenda is different, in that it’s a goal that has to be regularly accomplished for the show to continually make its point.  In this case, The Neighborhood’s goal is to start conversations about race, equality, prejudice and society in its current state.  Its point is, again, some version of “we’re not so different, you and I” -- and only through sitcom-flavored conflict and the distilled honesty of much longer real-life conversations can we grasp both that concept and the truth about the roles we play in the perpetuation of that idea’s counterproductive opposite.

The Neighborhood is, on its surface, a by-the-numbers sitcom, but it’s the agenda it has that gives it invisible boxes that need to be checked before it can stand on its own – or stand out.  Example: The first episode did everything it was supposed to do, but until it did what it had to do, I felt uncomfortable. Why?  Well, it mostly had to do with Calvin.  The same way that one might imagine being in the opposite sex’s shoes when considering how sexist something is, I imagined how I’d feel if Calvin’s character were a white man.  Suddenly his immediate disapproval of Dave and fam felt a lot more unsettling.  Granted, by episode’s end we learn that this was the point, thanks to a back and forth between Malcolm and Dave.  Dave complains about not being received as the nice guy he’s been trying to be all day, to which Malcolm replies, “It’s hard when you see yourself one way, and the rest of the world, they see you another.”  Ah, there it is.  The unifying sentiment that basically translates to “this is what prejudice feels like, Mister White Man.”

My problem with this is its function as the baseline of the show.  Combined with the idea that gentrification is a legitimate concern for affluent black communities, it is a necessary premise we have to accept before we can do fun things like watch Tina and Gemma (the true heads of their respective households) bond over Gemma’s curiosity about Tina’s wigs, or discuss whether or not white people use washcloths in the shower.  The cringe-worthiness of some of the jokes, combined with the inherent discomfort of the topics in play, had a larger effect on that first episode than I think The Neighborhood’s creators realized it would.  That first episode is probably the least fun of all of them to date.

On the flip side, if one doesn’t make those uncomfortable points about race and what not right out of the gate, most of the point could be lost on the audience.  Hence the issue with agendas.

Additionally, I feel like the waters are a little muddy as well, at least when it comes to topics.  Besides the race stuff, there’s the age-difference dynamic that comes into play between Calvin and younger types like Dave and Malcolm.  Tina and Gemma are separated more by culture than age-related issues, but they unite through their mutual wife-ness.

Marty is probably the most well-rounded of all the characters involved, but he’s also the only member of the Butler fam who seems to have had a higher level of exposure to white people due to his independence, intelligence and profession. In a scene where Dave hugs every member of the Butlers, Marty is the only one who enthusiastically meets his hugs.  Is this because he’s the only goofball in their house, or does it imply that his (also implied) increased exposure to people like Dave has somehow made him more personable?

All in all, The Neighborhood isn’t a bad show.  It picks up after episode one, and I’m genuinely interested in how the rest of the season turns out.  I know that these conversations about society, race, prejudice and equality are all important, and sitcoms have been tackling these types of issues for years, but at the same time if this show is to succeed it should focus on the things it does exceptionally well.  Tina and Gemma’s dynamic is great, Marcel Spears is pure gold, Greenfield brings hella heart to screen (offsetting what sometimes feels like Schmidt-Light) and Cedric is just Archie Bunker enough to make the point the writers are trying to make.  Just don’t get too heavy-handed with it.  Seriously.  Just ask everyone involved with Superior Donutsor The Carmichael Show.

The Neighborhood is telecast Monday at 8 p.m. on CBS.