CBS' "The Neighborhood" Returns with a Powerful Episode About Racial Injustice 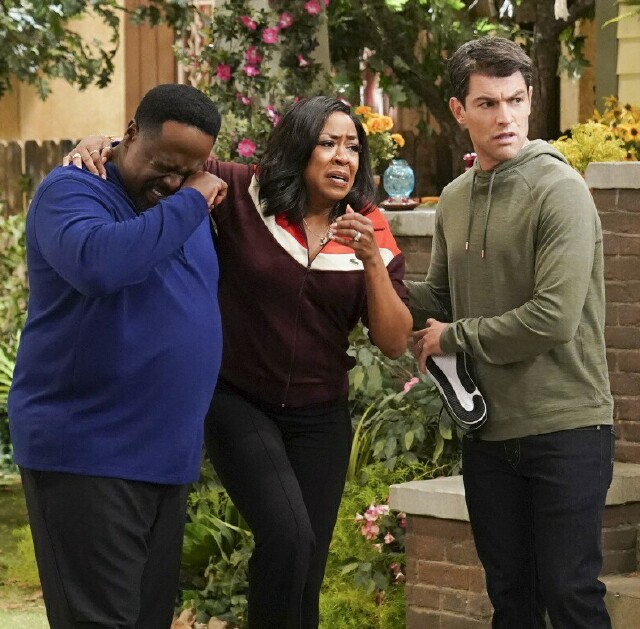 The world has changed for all of us since CBS' The Neighborhood  debuted in 2018. Not that the problems and obstacles encountered by the family at the center of this contemporary comedy are anything new. Quite the contrary: They've been around longer than any of us like to admit. What's different in 2020 is that there is no longer any excuse for anyone to be unaware of them. Or to not care. That's the message at the heart of tonight's season three premiere of the show. In the episode, which is perhaps the series' most dramatic and emotional to date, the Butler family is reeling after their oldest son Malcolm (Sheaun McKinney) disappears during a protest and they don't know what has happened to him.

"Our show is naturally built to address certain issues, the season premiere being the best example," series creator and executive producer Jim Reynolds (pictured below) told MediaVillage in an exclusive interview. "We felt that we had a responsibility to make this episode. Our show is specifically and uniquely positioned to say something about this important matter. It would be remiss for us not to take this on." 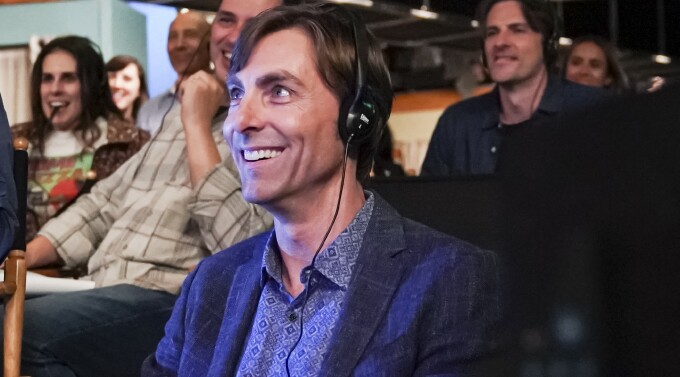 "It just felt really important as far as coming back after this long hiatus to talk about something that is really at the heart of the American psyche, which is this kind of police and social injustice," Cedric the Entertainer, who stars as Butler family patriarch Calvin and is also an executive producer on the show, said in a separate conversation.

"What I felt was, George Floyd and Breonna Taylor made people realize how we are all the same, how we all recognize the humanity in everybody," he continued. "It was very important for us to come back and approach it, talk about it. The show is based off differences in people, in cultures and races, and yet as we have gone through our seasons there is a unity there and a recognition of that unity, a recognition of people who see eye to eye over the simplest of things. Raising kids. Having a child. Being married. Stress at work. We're happy to have a platform where we can talk about real things like that."

"We recognize that we are a situation comedy and as such one of the greatest services we can provide and the value we can bring to our audience is to give them a place to come in these hard times and sit back for 30 minutes, spend some time with characters they love and laugh and kind of forget their problems as much as they can during that small window of time," Reynolds explained. "We're so inundated with so many issues that we're confronting as a country and as a planet I think it's an honor to provide a bit of safe harbor. Not to say we would ever dodge an issue, but first and foremost we want to be there for our audience." 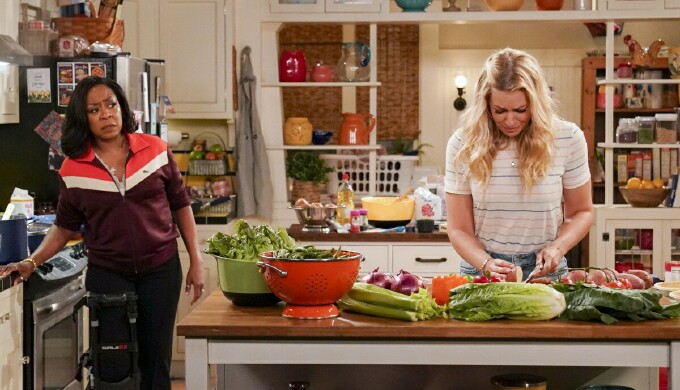 One particular scene in the episode is a perfect example of shifting between dark drama and bright comedy. In it, Malcolm's mother, Tina (Tichina Arnold, above left), is preparing a meal with neighbor and good friend Gemma Johnson (Beth Behrs, above right) and talking about how worried she is about Malcolm, and for both of her boys' safety every time they leave the house. Gemma, who also has a son, listens intently while slicing vegetables, and at one point is so overcome with emotion she starts to cry.

Gemma blames her tears on the fact that she's chopping an onion.

Tina reminds her that she's cutting a potato.

"That's the thing that we all identify with," Cedric exclaimed. "It's the human aspect of a story. Not necessarily when you take yourself out of it, but when you look at it and put yourself in it, right? Any mother would cry. We wanted to put the spotlight on the humanity of the moment."

"Our goal with that scene was to really hit the common ground between mothers regardless of race," Reynolds noted. "The idea and the pain of being a Black mother in this country, always worried about your children's safety any time they leave the house. I think that's one of the things that white people, white mothers, don't really understand. They don't have to live with that. And it's such a privilege to not. It's very easy as a result of that privilege to not really consider the human side of that, what that would feel like. The goal of that scene was to illustrate that, and also hopefully to drive that point home to our viewers who don't have that experience on a day-to-day basis, who don't have to consider what that must be like, what that weight is.

"Comedy is such a great teaching tool in many ways because if you can make people laugh it's a good way to get their guards down," he added. "It's a way to make them feel safe. Once you create that space for them it becomes a much easier space to listen." 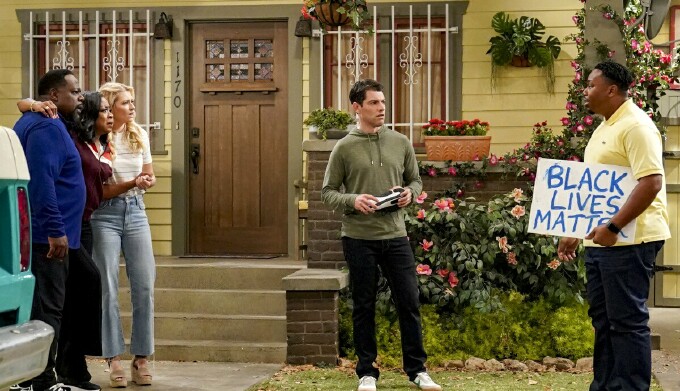 Two characters who have done a lot of listening to each other are Calvin and his neighbor Dave Johnson (Max Greenfield, pictured above, center, with Cedric, Arnold, Behrs and, at right, Marcel Spears as Marty Butler). Calvin didn't care for Dave at the start of the series (when Dave, Gemma and their son Grover moved into Calvin's predominantly Black neighborhood), but he has grown increasingly fond of him since then.

"At the beginning Calvin saw Dave as a representation of change he didn't want to see," Reynolds explained. "As he's gotten to know Dave more, they've become good friends. Calvin is kind of a brusque character by nature. The great thing about Dave is that he can see past that. He loves Calvin. Dave's such a bright-eyed idealist in so many ways, which again is a privilege of his background. That he can take those punches from Calvin because underneath he feels love there. There's a safety for Calvin because there's that love there, too. He can tell Dave exactly what he thinks, because he knows at the end of the day that they are friends." 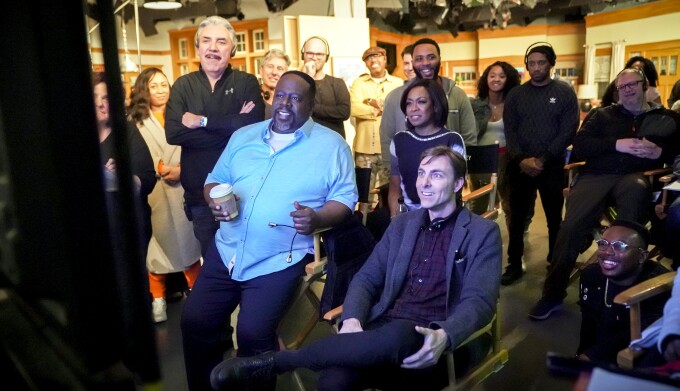 Of course, racial injustice isn't the only all-consuming issue of the day. There is also the pandemic, among other challenges. Now that The Neighborhood has factored the former into its season three storytelling, might it follow the lead of other sitcoms such as NBC's Superstore and ABC's The Conners and black-ish and work COVID-19 into its narrative in the weeks ahead?

"I was always of a strong opinion that I did not want to address the pandemic," Reynolds explained. "We wanted to give people relief from something that is so impossible to avoid, from the news, from personal stories, from the dark cloud of fear that is following them everywhere. It would be very hard to place our show in that situation without compounding what people are going through already.

"I took a page from Friends," he continued. "It was well into the run of the show when 9/11 happened, and Friends chose not to incorporate it into their storyline. The show, because it was on so long and was well into its run, had been flagging a little bit, but it came back very strong. I think a big part of that was because people wanted to escape. They didn't want to think about it more than they already were. They wanted somewhere they could reliably go and laugh and feel better about the world.

"People would like to return to some version of normalcy," Reynolds concluded. "To be able to do that in our television show is a gift."

The Neighborhood is telecast Monday at 8 p.m. on CBS.